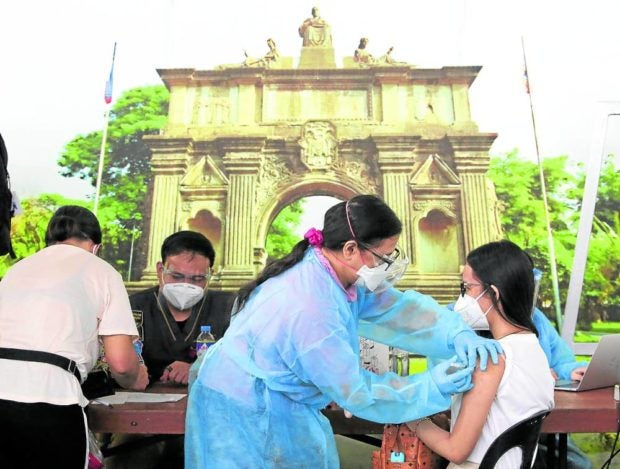 VACCINATION DRIVE ON CAMPUS GROUNDS Students of the University of Santo Tomas in Manila are inoculated against COVID-19 on Saturday. —MARIANNE BERMUDEZ

MANILA, Philippines — The government has lowered its initial target of rolling out 15 million vaccine doses against COVID-19 to just 9 million jabs—or an estimated 3 million a day—during the National Vaccination Days (NVDs) scheduled on Nov. 29 to Dec. 1.

That adjustment in the inoculation drive, also called “Bayanihan Bakunahan,” was made “following a series of consultations with local chief executives across the country, including our resource management and logistics team,” said a statement on Saturday by the National COVID-19 Vaccination Operations Center (NVOC) and its mother unit, the National Task Force (NTF) Against COVID-19.

The NTF also said another “Bayanihan Bakunahan” has been set on Dec. 15 to Dec. 17, to help achieve the government’s goal of fully vaccinating 54 million Filipinos by the end of the year.

The NTF and NVOC explained that they were already finalizing preparations for the first NVDs, when they found “a shortage in ancillary supplies, particularly syringes for the Pfizer-BioNTech vaccines and other logistical challenges.”

They added: “While the Department of Health (DOH) has already anticipated the volume requirement for syringes specifically intended for the Pfizer-BioNTech vaccines, the scheduled shipment of the procured supplies made through [the United Nations Children’s Fund has] been delayed due to the current global shortage [of those syringes].”

Both the government and the World Health Organization had warned of such a shortage, including that of the special syringe used to inject 0.3 milliliter per dose of the mRNA vaccine produced by Pfizer and Moderna.

Of the estimated 140 million COVID-19 vaccine doses delivered to the country since February, Pfizer shipments have totaled 36.6 million doses, the second largest after the 54 million CoronaVac doses from Chinese state company Sinovac Biotech.

Only the Pfizer and Moderna vaccines have been approved by the Food and Drug Administration for minors 12 to 17 years old. These vaccine brands are also being used as booster shots for health-care workers, senior citizens and immunocompromised individuals.

As of the NVOC’s data on Friday, 35.4 million, or 32 percent, of the country’s more than 110 million population have been fully vaccinated. Around 9.6 million more have received one jab.

Explaining the second “Bayanihan Bakunahan” next month, Dr. Beverly Ho, director of the Disease Prevention and Control Bureau of the DOH, said at Saturday’s Laging Handa briefing that “All the governors and mayors … agreed that we wanted to increase access to the vaccines.”

According to her, more vaccines are also due to arrive in time for the Dec. 15 to Dec. 17 inoculations.

“We are just really being very aggressive about what we need to do before Christmas and have more Filipinos vaccinated against COVID-19,” she said.

She noted that some local governments have populations which are concentrated in certain areas, which means it would be easier to reach out to these residents and vaccinate them.

“But [other localities] are far apart because these are island municipalities. So physically it’s hard for our vaccination teams to reach the islands,” Ho said.

“So there are contextual challenges for each [area], especially [the] geographically isolated and disadvantaged. …We are calibrating also their targets based on those unique challenges that they have,” she added.

By the second vaccination drive, “we will be ready for a happy Christmas. There’s no more reason not to be able to get vaccinated,” Ho said.