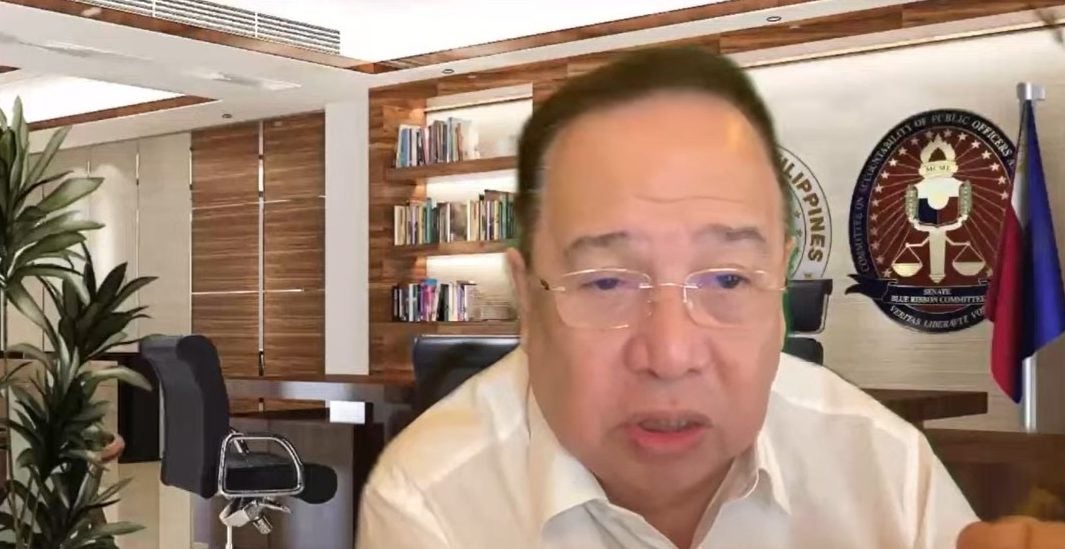 MANILA, Philippines — Sen. Richard Gordon on Friday said Chinese businessman Michael Yang, who had served as President Duterte’s economic adviser, was just wasting the time of the Senate and the Supreme Court with his petition to throw out the blue ribbon committee’s order for his arrest.

“This committee will defend the right of the people, which is heavier than the privilege of a foreigner who lives a life of deception,” Gordon said of Yang, the alleged financial backer of Pharmally Pharmaceutical Corp., which bagged the lion’s share of procurement contracts for medical supplies in 2020 and 2021.

Yang, who used the name Michael Yang Hong Ming in filing his petition, also asked the high tribunal to order the Senate panel not to compel him to disclose his personal properties and transactions in relation to the investigation into alleged irregularities in the procurement of pandemic supplies.

Gordon said Yang might have been spooked by the arrest of Pharmally executives who are now detained at the Senate offices in Pasay City for defying the Senate panel’s orders.

Mohit Dargani, Pharmally secretary and treasurer, his sister and company president, Twinkle Dargani, and director Linconn Ong, are all being held in detention in the Senate building after they were declared in contempt for not cooperating with the inquiry.

Gordon said the petition showed Yang’s “desperate attempt to distract the Senate blue ribbon committee from its investigation on corruption in the middle of the pandemic.”

On Nov. 14, the Darganis were arrested before their chartered jet could fly out of the country from Davao City airport to Kuala Lumpur, Malaysia.

Dargani said his Singaporean friend, entrepreneur Gary Wong, paid for the $37,000 charter operated by Singapore-based Seletar Jet Charter Pte Ltd., adding that the latter had no connection to Pharmally.

The Senate panel is investigating allegations of corruption in the P11.5 billion worth of contracts won by Pharmally, most of which was coursed through the Procurement Service of the Department of Budget and Management (PS-DBM).

PS-DBM, under its then head, Lloyd Christopher Lao, a former budget undersecretary who is now also the subject of a Senate arrest order and in hiding, contracted Pharmally on behalf of the Department of Health (DOH) for face masks, personal protective equipment, COVID-19 test kits and other medical items, after the agency transferred at least P42 billion of its pandemic funds to the procurement office last year.

But the transfer was flagged by the Commission on Audit for lack of supporting documents, triggering the Senate panel to launch a motu proprio investigation.

Another Pharmally executive, regulatory affairs head Krizle Grace Mago, who earlier sought refuge at the House of Representatives and recanted her Senate testimony, appeared at Friday’s hearing to maintain her claim that her earlier confession that Pharmally swindled the government was a “pressured response.”

“I said my piece at the House and I stand by my statement,” the Pharmally executive told the panel.

On a motion by his colleagues, Sen. Richard Gordon approved a proposal to send Dargani and Ong to the Pasay City jail for their continued noncooperation.

But Dargani appealed to Gordon to reconsider, promising to locate boxes of documents related to Pharmally’s transactions with the government which he and his sister had failed to provide the committee and for which they were cited in contempt and ordered arrested.

Dargani also spoke for the first time publicly about their foiled escape from the country and about his sister Twinkle’s mental health struggles as well as the emotional toll of their situation on their mother.

He said he, his sister and their mother, reached Davao City on Nov. 1 or Nov. 2 after a long road trip from Manila in a borrowed car.

“The reason we went to Davao was, I asked my mom where we could feel safe,” he said. “Based on our research, it would be easier for us to move around in Davao, and it was more secure for my mom and my sister.”

The Gordon panel’s inquiry has unearthed several alleged irregularities with Pharmally’s contracts, including findings that deliveries to the DOH included face shields that were substandard and with tampered production dates, and nearly expired test kits.

The senators also learned, based on testimonies from Ong and the company’s Singaporean president Huang Tzu Yen, that Yang was the company’s financier and guarantor. Yang denied this, insisting he only introduced Ong to his business associates and friends in China.

Gordon said Yang had been lying to the Senate committee repeatedly, including about his addresses, his role in the Pharmally contracts, and paying the right taxes.

“He has resided in the Philippines for nine years but paid not even one centavo in taxes,” he said. Despite his claims that he had no money, Yang was able to build a building in Davao City, Gordon said.

In its partial report, the committee recommended criminal charges against Yang, Lao and his former colleagues in the PS-DBM, and Pharmally executives including the Dargani siblings.

Yang’s lawyer Raymond Fortun requested that his client be excused from Friday’s hearing because he had been diagnosed with nonexudative pharyngitis at Davao Doctors Hospital on Nov. 24 and his physician could not fully rule out the possibility that Yang had contracted COVID-19.