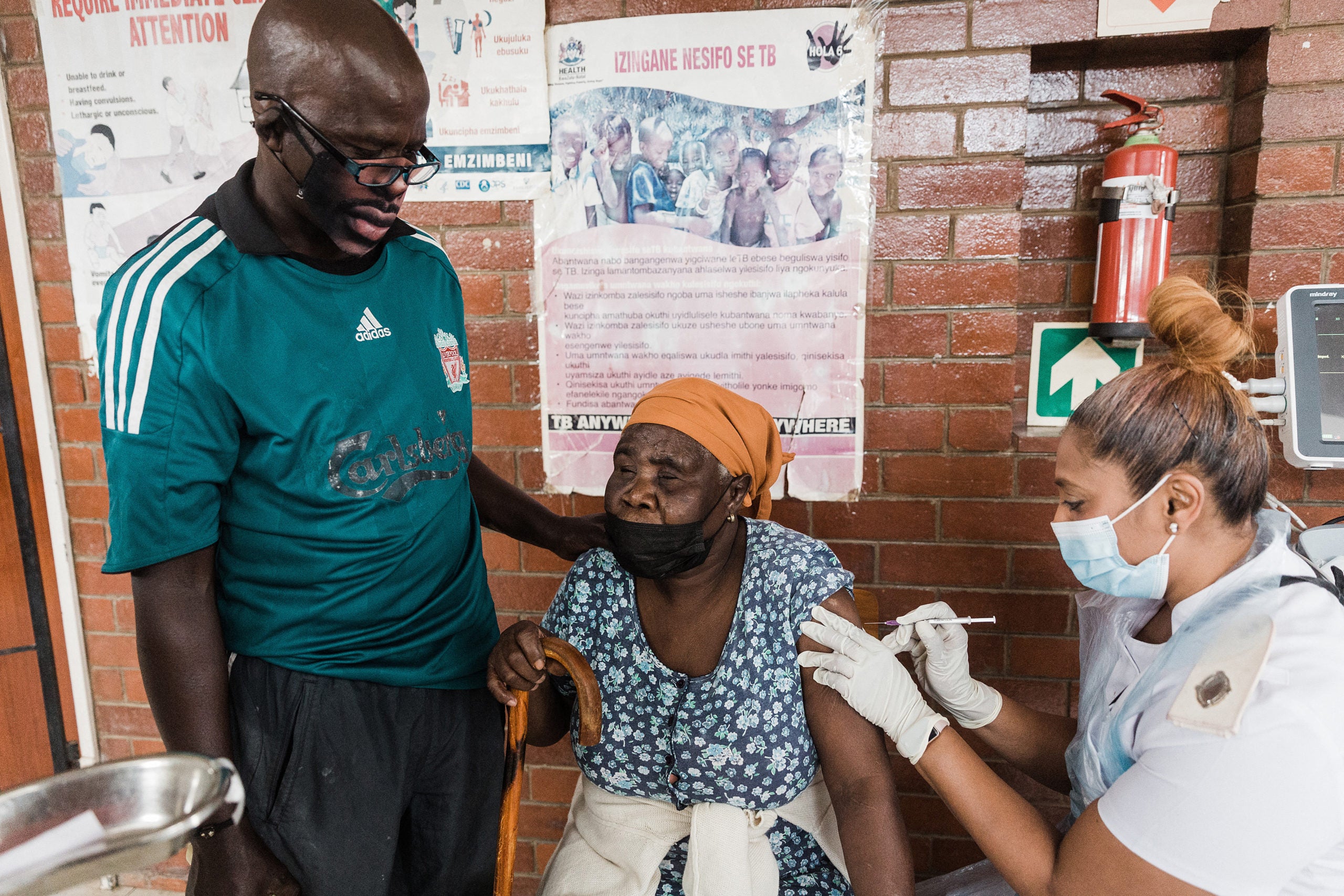 Sixty-year-old Thandiwe Khumalo who is blind is assisted by her brother Sipho Khumalo ( L ) as Sister Avanti Moses administers the Pfizer vaccine in Bhambayi township, north of Durban on September 24, 2021. (AFP)

JOHANNESBURG–Scientists in South Africa said Thursday they had detected a new COVID-19 variant with a large number of mutations, blaming it for a surge in infection numbers.

The number of daily infections in Africa’s hardest-hit country has increased tenfold since the start of the month.

In response, Britain banned all travel from the country and five other southern African nations as concerns grow about the new variant, which scientists say could be more infectious than Delta and more resistant to current vaccines.

“Unfortunately we have detected a new variant, which is a reason for concern in South Africa,” virologist Tulio de Oliveira told a hastily called news conference.

The variant, which goes by the scientific label B.1.1.529, “has a very high number of mutations,” he said, adding that the World Health Organization may give it a Greek variant name — like the dominant Delta strain — on Friday.

“It’s unfortunately causing a resurgence of infections,” he said.

The variant has also been detected in Botswana and Hong Kong among travellers from South Africa, de Oliveira added.

The WHO said it is “closely monitoring” the reported variant and is expected to meet on Friday to determine if it should be designated a variant of “interest” or of “concern”.

“Early analysis shows that this variant has a large number of mutations that require and will undergo further study,” the WHO added.

South African Health Minister Joe Phaahla said the variant was of “serious concern” and behind an “exponential” increase in reported cases, making it “a major threat”.

The country’s daily number of infections hit 1,200 on Wednesday, up from 106 earlier in the month.

Before the detection of the new variant, authorities had predicted a fourth wave to hit South Africa starting around the middle of December, buoyed by travel ahead of the festive season.

The government-run National Institute for Communicable Diseases (NICD) said 22 positive cases of the new variant have been recorded in the country.

The NICD said the number of detected cases and the percentage testing positive are “increasing quickly” in three of the country’s provinces including Gauteng, home to the economic hub Johannesburg and the capital Pretoria.

A cluster outbreak was recently identified, concentrated at a higher education institute in Pretoria, the NICD added.

Last year, the Beta variant of the virus first emerged in South Africa, although until now its infection numbers have been driven by Delta, which was originally detected in India.

South Africa has the highest pandemic numbers in Africa with around 2.95 million cases, of which 89,657 have been fatal.

Scientists said the new variant has at least 10 mutations, compared to two for Delta and three for Beta.

“The concern is that when you have so many mutations, it can have an impact on how the virus behaves,” Maria Van Kerkhove, the WHO’s technical lead on Covid-19, said at a virtual press briefing.

“It will take a few weeks for us to understand what impact this variant has on any potential vaccines,” she added.

Neutralizing the variant is “complicated by the number of mutations this variant” contains, said one of the South African scientists Penny Moore.

“This variant contains many mutations that we are not familiar with,” she added.

The Africa Centres for Disease Control and Prevention said it will soon meet South African experts to discuss the variant.

“There are so many variants out there but some of them are of no consequence on the trajectory of the epidemic,” Africa CDC head John Nkengasong told a news conference on Thursday.

After a slow start to South Africa’s vaccination campaign, around 41 percent of adults have received at least one dose, while 35 percent are fully vaccinated. Those numbers are far above the continental average of 6.6 percent of people vaccinated.

South Africa is aiming to inoculate 70 percent of its 59 million people.

With stockpiles of 16.5 million shots, South Africa has deferred taking delivery of more ordered doses because “we are getting vaccines in faster than we are using” them, health ministry director Nicholas Crisp said.