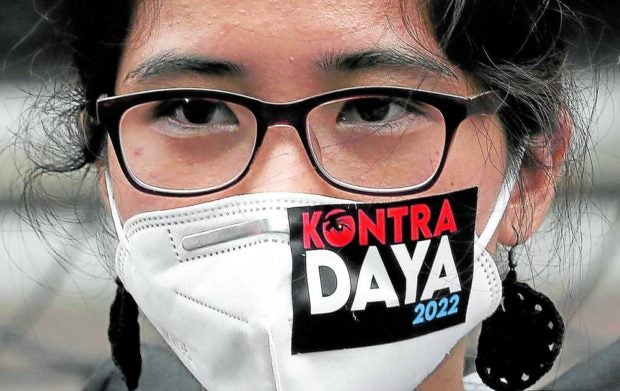 EYES ON POLL CHEATERS A member of the election watchdog Kontra Daya delivers the group’s message using her face mask, in a gathering outside the Commission on Elections office in Intramuros, Manila, on Thursday. —RICHARD A. REYES

MANILA, Philippines — In-person campaign activities for the May 9, 2022, polls will be allowed only in areas classified under COVID-19 alert level 3 and below, according to the Commission on Elections (Comelec).

Under the so-called new normal campaign rules, candidates are required to get prior approval before they can campaign, and local government units (LGUs) are authorized to issue permits for motorcades and outdoor campaign rallies, including the final “miting de avance.”

Meanwhile, accreditation for 76 party list groups have been denied with finality, mostly because of inadequate documentary proof that they represent their respective sectors.

“Majority have pleadings that were incomplete. Some were also lacking in their jurisdictional allegations,” Comelec spokesperson James Jimenez said on Thursday.

The Comelec earlier rejected 126 of the 270 party list groups that registered in October, but many of them filed an appeal.

Jimenez provided a summary of the pandemic-era campaign rules in a media briefing conducted in person at the Comelec headquarters in Manila and via video link.

The rules will apply during the official campaign period that begins on Feb. 8 and on March 25 for national and local candidates, respectively.

Comelec campaign committees will be formed at the national, regional, provincial and municipal levels.

Each committee will be chaired by the election director in the area. The members will include representatives of the Department of Health ( DOH), the Department of the Interior and Local Government, and the police and military.

The committees are to declare the category level in their area, mirroring the five-tiered COVID-19 alert levels determined by the DOH and the Inter-Agency Task Force for the Management of Emerging Infectious Diseases.

Full- or over-capacity crowds in campaign venues are prohibited.

To get approval from their respective Comelec campaign committees, candidates have to apply for a permit and submit the activity details—date, time and place, motorcade routes, venue capacity, and even the names of their companions.

For in-person campaigning, candidates have to provide not only the companions’ names but proof of their identity as well.

For indoor rallies, caucuses, meetings and conventions, candidates are required to present proof of reservation and the Department of Tourism’s accreditation of the venue.

For outdoor rallies and the “miting de avance,” as well as motorcades and caravans, candidates have to submit a permit signed by the concerned LGU and a report on planned health protocols against crowding.

Because candidates running against incumbent officials may be disadvantaged by the permit requirement, Jimenez said, local chief executives may deny a campaign permit only if a prior permit had been given for a rally to be held at the same time and location.

Batas Pambansa 880 Section 6(b) on rally permits will apply. It states that the mayor or his/her representative shall act on the application within two working days from the date of application; otherwise the permit shall be deemed granted.

The campaign committees are to enlist barangay officials and guards, barangay health workers, and the police and military to monitor the conduct of the campaign.

Per the Comelec, health protocol violations will be considered election offenses which, under the Omnibus Election Code, are punishable with imprisonment of one to six years, disqualification from public office and voting, and a fine for erring political parties of at least P10,000.