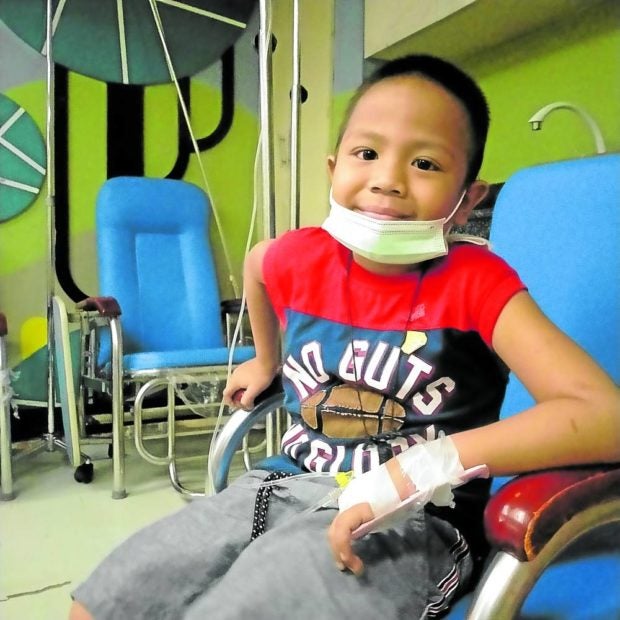 MANILA, Philippines — Like many boys who grew up watching the TV series “Ang Probinsyano,” 9-year-old Mark Nico Barruga wants to be a policeman. But to become one, he needs to finish his studies which have been put on hold since he was diagnosed with acute lymphocytic leukemia in November 2015.

“He really wants to go back to school but I told him he needs to get better first. Even his teacher said it was a shame he had to stop because he’s good in writing and math. Sometimes, he asks me to give him math exercises which he solves by himself,” Barruga’s mother, Mary Joy, told the Inquirer.

The last time Barruga was in school was in 2019 as a Grade 1 student. Four years before that, he came down with a high fever which a doctor thought was due to dengue.

“His platelet count was low so from the clinic in San Pedro, Laguna, we took him to San Lazaro Hospital in Manila. A blood test also showed a low red blood cell count so he was given blood transfusions. The doctor’s diagnosis was also dengue,” Mary Joy said.

After a monthlong confinement, Barruga was sent home. But within a week, his fever was back, along with other symptoms: contusions (pasa) and joint pains that made it hard for him to walk. The family returned to San Lazaro where a doctor told Mary Joy to prepare for the possibility her son had leukemia, a diagnosis which was confirmed by a hematologist at Philippine Children’s Medical Center (PCMC) in Quezon City.“I cried a lot when I heard that. It was like something heavy had fallen on me. I couldn’t breathe because it hurt too much,” she said.

Barruga immediately underwent chemotherapy and after he completed 16 cycles in 2019, there was an improvement in his condition. Then came the lockdowns caused by the COVID-19 pandemic in 2020 that forced him to miss his regular checkups at PCMC.

“In September 2020, he lost weight while the contusions reappeared. He also complained of pain in his feet. When we went to the hospital, the doctor told us the cancer was back and he had suffered a relapse,” Mary Joy said.

The doctor placed Barruga on a new chemotherapy protocol costing P771,957.60 for 12 cycles, excluding fees for required laboratory tests like complete blood count, bone marrow and body fluid. He is now on his second cycle.

Mary Joy’s husband, Mark Anthony, is the sole breadwinner in the family of six. He earns P3,000 to P4,000 a week as a truck driver. The family has been paying for Barruga’s treatment by soliciting donations from politicians and government agencies.