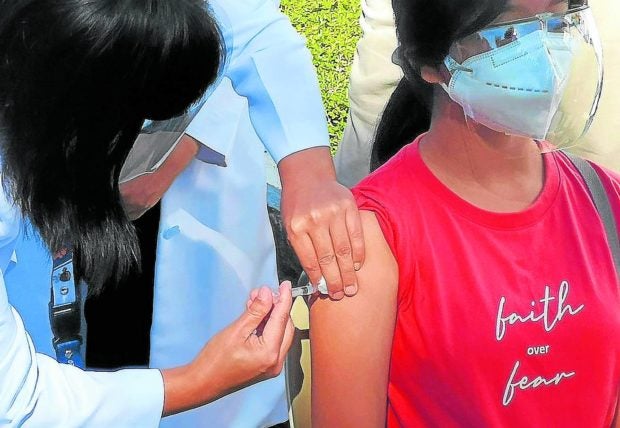 NO FEAR A teen in Baguio receives her COVID-19 vaccine during the ceremonial rollout of the city’s adolescent vaccination program on Oct. 29. —EV ESPIRITU

BAGUIO CITY, Benguet, Philippines — In a classic example of science versus faith, medical frontliners are struggling to convince small communities in Apayao and Kalinga provinces where religious organizations have been discouraging members from getting vaccinated against COVID-19, officials of the Department of Health (DOH) said on Wednesday.

Members of evangelical groups and Christian sects in remote villages have refused to take vaccines, providing a minor glitch in the government’s efforts to expand inoculations to most of the general population, said Dr. Amelita Pangilinan, assistant director of the DOH in Cordillera region, at a briefing.They live in Conner town, Apayao, and Tanudan town in Kalinga, and have varying reactions to vaccines, she said.

“A member of one of the religious groups fell ill and has been advocating vaccines after recovery,” Pangilinan said, suggesting that some of these groups could still change their minds about inoculations.

But many believe that “God provides everything,” so they question the necessity for vaccines, said Wyb Spud Lumpias, one of the agency’s regional information officers who joined Pangilinan when she visited the communities this month.

As of Tuesday, at least 77.13 percent (67,342) of Apayao’s eligible population of 87,310 had been inoculated, with over 51 percent (45,226) fully vaccinated. Apayao is among the three Cordillera communities that are closer to their herd immunity targets.

Baguio City has taken the lead in achieving herd immunity among local governments in the Cordillera after 94.3 percent (265,009) of its eligible population of 281,000 had been inoculated, with 80.39 percent (225,910) completing their shots as of Monday.

“That means nine of 10 Baguio residents have received a dose of the vaccine,” said Dr. Donnabel Tubera Panes, the city’s chief epidemiologist.

But vaccine hesitancy remains a concern in other provinces, Pangilinan said.

“Some of these religious groups have reinforced traditional Cordillera beliefs about health,” Lumpias said, citing cases when the elderly waive their turn during their designated vaccination schedules in favor of their younger family members.

“They believe they have reached the point of their lives when they can be sacrificed for as long as the new generation is safe,” he said.

The number of religious groups that are “anti-vaxxers” make up 10 percent of their respective communities, and should not pose a threat as Apayao nears herd immunity, Pangilinan said.Kalinga is on the threshold with 60.7 percent (94,142) of its 155,094 target population having received at least their first doses, with 39 percent (60,486) fully vaccinated.

Mountain Province, Benguet and Ifugao are also headed for their respective immunity goals.

These provinces are prepared for the national vaccination drive from Nov. 29 to Dec. 1, where the Cordillera intends to vaccinate 68,000 people a day to fulfill the target of inoculating 206,000 residents in the region, Pangilinan said.