Emirati general accused of torture up for Interpol top role 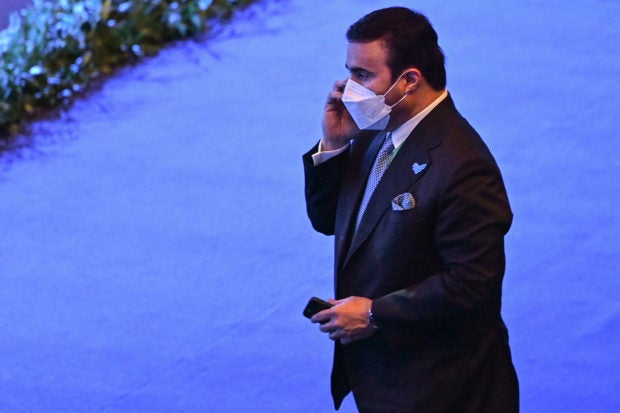 Major General Ahmed Nasser al-Raisi, inspector general at the UAE interior ministry and candidate for the 2021 Interpol election speaks on the phone on the first day of the 89th Interpol General Assembly in Istanbul on November 23, 2021. AFP

ISTANBUL — Interpol may on Thursday find itself with a new president, an Emirati general accused of torture, adding to concerns the global police agency risks being co-opted by repressive regimes.
General Ahmed Nasser Al-Raisi, head of the United Arab Emirates’ security forces, has been seeking election to the largely ceremonial and voluntary role since last year.
That follows years of generous funding for the Lyon, France-based body by the Emirati regime and accusations that Interpol’s system of so-called “red notices” for wanted suspects has been abused to persecute political dissidents.
Only the Czech Republic’s Sarka Havrankova — a veteran officer overseeing the country’s international cooperation in police matters — is standing against Raisi in elections at this year’s Interpol General Assembly in Turkey for the four-year post.
“The election of General Al Raisi would undermine the mission and reputation of Interpol and severely affect the ability of the organisation to carry out its mission effectively,” three European Parliament members wrote in a letter dated November 11 to European Commission President Ursula Von der Leyen.
While the position of president is symbolic, endorsement of the general by the group’s 195 members “would send a signal to other authoritarian governments” that using Interpol to pursue critics abroad “is okay”, said Edward Lemon, an assistant professor specialising in transnational repression at Texas A&M University.

In October 2020, 19 NGOs, including Human Rights Watch, expressed concern about the possible choice of Raisi, who they described as “part of a security apparatus that continues to systematically target peaceful critics”.
Complaints of “torture” were filed against the general in recent months in France and Turkey, which is hosting the general assembly in Istanbul this week.
One of the complainants, British national Matthew Hedges, said he was detained and tortured between May and November 2018 in the United Arab Emirates, after he was arrested on false charges of espionage during a study trip.
In another complaint, lawyers for the Gulf Centre for Human Rights accuse the Emirati general of “acts of torture and barbarism” committed against government critic Ahmed Mansoor.
Mansoor has been detained since 2017 in a four-square-metre (43-square-foot) cell “without a mattress or protection against the cold” and “without access to a doctor, hygiene, water and sanitary facilities”, the lawyers said.
These complaints have not resulted in any formal proceedings against Raisi.
Interpol Secretary General Jurgen Stock, who handles day-to-day management of the organisation, told journalists he was “aware of these accusations, which are currently an issue between the parties involved”.
“It will be on Thursday the role of the member countries of Interpol to decide” on whether Raisi should get the role, said Stock, who was given a second five-year term in 2019.
South Korean Kim Jong-yang has been president of the organisation since the 2018 arrest of his predecessor Meng Hongwei in China, where he had served as a vice minister of public security.
“The questionable reputation of Raisi… whether deserved or not, is an important factor for the organisation,” said Mathieu Deflem, sociology professor at the University of South Carolina and author of books on Interpol.
A report by a former British director of public prosecutions, Sir David Calvert-Smith, that was published in March concluded that the UAE hijacked the system of red notices — international wanted notices — to put pressure on opponents.

If he is elected on Thursday, Raisi would “likely work with like-minded governments to stymie reform efforts pushing for greater transparency in Interpol”, Texas A&M’s Lemon said.
Lemon said the UAE donated $54 million (48 million euros) to Interpol in 2017 — an amount almost equivalent to the required contributions of all the organisation’s 195 member countries. This amounted to $68 million (60 million euros) in 2020.
The UAE gave or had pledged to Interpol around 10 million euros in 2019, approximately seven percent of its total annual budget.
“Such funding reduces other members’ ability to influence the organisation,” Lemon said.
The Emirates hosted the general assembly in 2018 and wanted to host it again in 2020, he said.
That meeting was postponed due to Covid, and went to Turkey instead — though the government of Recep Tayyip Erdogan also faces accusations of mass detentions, abuse of trial process and repression.
Czech candidate Havrankova also believes these “very serious allegations” might prevent her rival’s election.
“I’m just trying to bring the alternative,” she said.
“It’s for the delegations to decide how they want their organisation to be led.”
ADVERTISEMENT
FEATURED STORIES
NEWSINFO
Metro Manila’s No. 1 wanted man arrested, says NCRPO
NEWSINFO
Brian Poe-Llamanzares receives his PhD in Public Administration
NEWSINFO
Mayor bares issues vs closed QC school
Read Next
Valenzuela ‘became a lot better’ because of gov’t’s war on drugs — mayor
EDITORS' PICK
vivo brings to the Philippines a powerful smartphone with a slimmer body, the vivo Y02s for only PHP 6,499
Palace: Biggest supermarkets in PH commit to sell sugar at P70 per kilo
What to watch out for when selecting a video surveillance solution
Heads may roll at BOC, says Palace if sugar smugglers are allowed to use recycled import permits
House energy committee chair Arroyo bats for cheap electricity
DOH reports increase in daily COVID-19 deaths, mostly unvaxxed
MOST READ
Brian Poe-Llamanzares receives his PhD in Public Administration
Alyssa Valdez to miss Creamline’s AVC Cup campaign
Metro Manila’s No. 1 wanted man arrested, says NCRPO
Rhian Ramos on new beau Sam Verzosa
Don't miss out on the latest news and information.