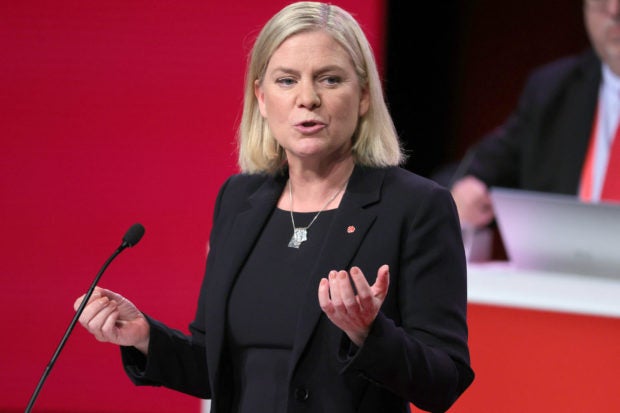 In this file photo taken on November 04, 2021 Sweden’s Minister of Finance Magdalena Andersson delivers a speach after being elected to party chairman of the Social Democratic Party at the Social Dedmocratic Party congress in Gothenburg. AFP

STOCKHOLM — Sweden’s parliament looks set to elect Finance Minister Magdalena Andersson as the country’s first woman prime minister on Wednesday, hours after she clinched a last-minute deal securing key support.
The 54-year-old, who took over as leader of the Social Democrats earlier this month, reached a deal with the Left Party late on Tuesday to raise pensions in exchange for its backing in Wednesday’s vote in parliament.
“We have reached an agreement to strengthen the finances of the poorest pensioners,” Andersson told public broadcaster SVT minutes after the deal was announced.
“We’re not going to block Andersson,” Left Party leader Nooshi Dadgostar told Swedish Radio.
Under Sweden’s system, a prime ministerial candidate does not need the support of a majority in parliament — rather, they just need to not have a majority against them.
Andersson has already received the support of the Social Democrats’ coalition partner the Greens, as well as the Center Party.
However, political observers noted there was still a slight chance the Center Party could thwart Andersson’s bid.
It has previously warned that it could withdraw its support if she concedes too much ground to the Left Party.
Center Party leader Annie Loof refused to comment late Monday on the Left’s deal with Andersson.
The vote will take place at 0800 GMT.
If elected, Andersson would formally take over her functions following a meeting with King Carl XVI Gustaf on Friday.
She would replace Stefan Lofven, who resigned on November 10 after seven years as prime minister in a widely expected move aimed at giving his successor time to prepare for the country’s September 2022 general election.
The Social Democrats are currently hovering close to their lowest-ever approval ratings with elections less than a year away.
The right-wing opposition, led by the conservative Moderates, has in recent years inched closer to the anti-immigration Sweden Democrats and hopes to govern with its informal backing.

Despite being a nation that has long championed gender equality, Sweden has never had a woman as prime minister.
All other Nordic countries — Norway, Denmark, Finland and Iceland — have seen women lead their governments.
After being confirmed as the Social Democrats’ leader, Andersson, a former junior swimming champion often described as “pragmatic” and a “technocratic bureaucrat”, outlined three political priorities going forward.
She said she wanted to “take back democratic control of schools, healthcare and elderly care”, and move away from welfare sector privatisation.
She also said she aimed to make Sweden a worldwide role model in climate transition.
And she vowed to end the segregation, shootings and bombings that have plagued the country in recent years, usually due to rival gangs settling scores or organised crime battling over the drug market.
The violence has mainly hit disadvantaged neighbourhoods with large immigrant populations, but has increasingly spilt over into other areas.
In 2020, 47 people were killed in 366 shootings in the country of 10.3 million people, according to official statistics.
There were also 107 bombings and 102 attempted detonations.
Crime and immigration are expected to be among Swedes’ main concerns in next year’s election.
Lund University political analyst Anders Sannerstedt predicted it would be a “close race”.
“Right now four parties to the right command 174 seats (in parliament), while the four parties to the left have 175 seats. Recent polls show roughly the same,” he said.
Sannerstedt said he expected “no major changes” in policies from a government headed by Andersson.
ADVERTISEMENT
FEATURED STORIES
NEWSINFO
Roque ‘hurt’ after presidential aspirant did not adopt him in Senate lineup
NEWSINFO
PH tightens testing, quarantine requirements for inbound travelers starting Dec. 3
NEWSINFO
‘Maski na hindi ‘yung mga bright’: Duterte urges public to elect new leaders