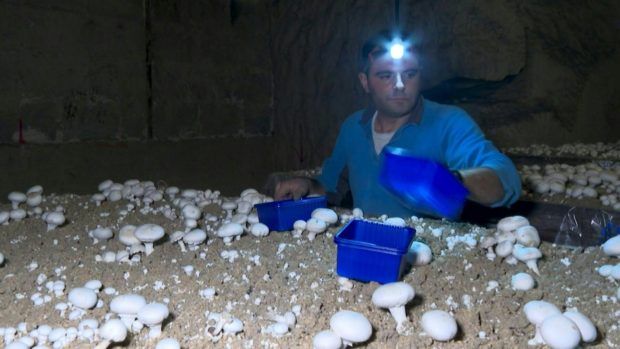 CARRIERES-SUR-SEINE, France — Two centuries ago, French farmers revolutionized mushroom production by moving into the maze of limestone quarries underneath Paris, but today only a handful still cultivate a heritage at risk of fading away for good.
The bitter irony is that demand for traditionally grown white button mushrooms, and their more flavorful brown-capped cousins, is as high as ever.
“It’s not a question of finding clients, I sell everything I can produce,” said Shoua-moua Vang at Les Alouettes in Carrieres-sur-Seine, a short drive from the bustling La Defense business district west of the capital.
Vang runs the largest underground mushroom cave in the Paris region, spread across one and a half hectares (3.7 acres) of tunnels in a hill overlooking the Seine river.
He counts Michelin-starred chefs as well as supermarket chains and local markets among his customers, even though he deems his mushrooms “expensive” at 3.20 euros a kilo wholesale ($1.65 a pound).
But dank trays loaded with hundreds of kilogrammes of fungi were going to waste during a recent visit, because Vang lacked enough hands to pick them all.
Just five of his 11 workers were on the job after the others called in sick — and Vang was doubtful that all of them would actually return.
“People these days don’t want to work all day in the dark like vampires,” he said, estimating that this day’s production would top out at 1.5 tonnes instead of his usual 2.5 or even three tonnes.
He is one of just five traditional producers of what the French call “champignons de Paris” located around the capital, along with an even smaller number in abandoned quarries north of the capital.
That’s down from around 250 in the late 19th century, when farmers flocked to a “royal” mushroom variety that the Sun King, Louis XIV, had made popular by having it grown at Versailles.
They had discovered that Agaricus bisporus would grow year-round if placed in a manure-based substrate deep underground, where temperatures and humidity could be controlled and the dark would encourage growth.
It also turned out that the caves’ earthy atmosphere, reinforced by covering the compost with ground-up limestone, imparted a nutty, almost mineral taste while preventing the mushrooms from becoming over-saturated with water.
Even the macabre tunnels of the Paris catacombs, now a top tourist attraction, were once filled with mushroom beds.

Rapid urbanisation and in particular the construction of the Paris metro began pushing growers out of the capital in the early 1900s, though around 50 were still in quarries under Paris suburbs in the 1970s, often run by new generations of the same family.
The arrival of cheaper imports from industrial hangars in the Netherlands, Poland and later China, which use peat instead of limestone to boost production rates, proved too much for most.
“It’s hard to find people who want to take over because there’s no mushroom cultivation programmes in agriculture schools,” said Muriel Le Loarer, who is working to revive the Paris mushroom tradition at the SAFER rural development agency.
Vang, for example, had worked 11 years at the quarry owned by Jean-Louis Spinelli, whose children declined to follow in their father’s footsteps, before taking over in September 2020.
“Finding people to pick the mushrooms is complicated, it’s hard to find good compost, and people don’t want to invest when you don’t know if producers are going to make it,” Spinelli said.
“We’re promoting the sector, helping to find financing and working with local authorities to open quarries back up,” said Le Loarer, noting the growing interest in local produce and the farm-to-table trend.
For now, though, Paris mushrooms are just a tiny fraction of the 90,000 tonnes produced in France each year, according to figures from the Rungis wholesale market south of the capital.
Officials say it’s too late to create a distinctive “Paris mushroom” certification under France’s AOP food appellation rules, since the name has been used generically for decades.
That means producers face a marketing challenge to ensure people realise when they’re buying the authentic, quarry-farmed fungi.
“Here our mushrooms grow naturally, I don’t boost them by spraying water because that fills them with water,” Vang said. “These mushrooms from the huge hangars are basically grown by computers.”
RELATED STORY
Mushrooms, madeleines, cassoulet–how about some French provincial fare this Christmas?
ADVERTISEMENT
FEATURED STORIES
NEWSINFO
‘Maski na hindi ‘yung mga bright’: Duterte urges public to elect new leaders
NEWSINFO
PH tightens testing, quarantine requirements for inbound travelers starting Dec. 3
NEWSINFO
Pacquiao to voters: If you can’t vote for me, then don’t vote for a corrupt candidate