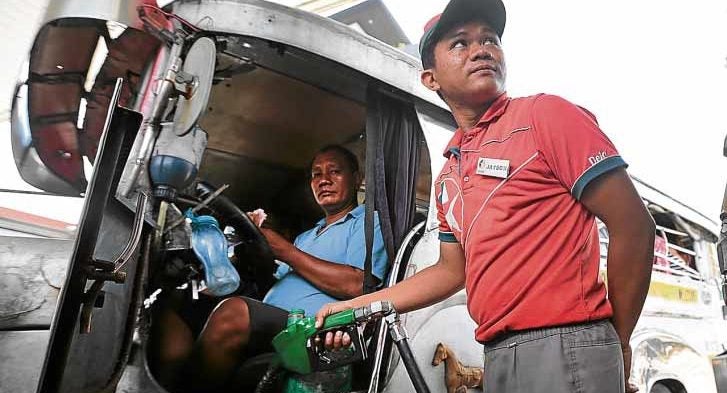 MORE GROANS AT THE PUMP A gas station attendant fills up the diesel tank of a jeepney in Quezon City. INQUIRER file photo / GRIG C. MONTEGRANDE

MANILA, Philippines — The government has started with its distribution of fuel subsidies worth P1-billion to about 136,000 public utility jeepney drivers as the surge in fuel prices continues.

This comes as the Land Transportation Franchising and Regulatory Board (LTFRB) on Wednesday launched the Pantawid Pasada Fuel Program (PPP) aimed to help drivers shoulder the brunt of skyrocketing fuel prices.

(Even though the fuel prices slightly went down in the past weeks, the prices remain high as compared to that recorded at the start of the year. We need to help our transport sector, especially our jeepney drivers.)

(Not only to help drivers to shoulder their daily expenses for fuel but to ensure that public transport is available for commuters.)

The 136,000 jeepney drivers are expected to receive P7,200 per vehicle as a one-time subsidy. Their subsidies will be sent to their respective PPP cards.

Any violation in the use of the card (purchase of other products aside from fuel using the card) will automatically disqualify the card owner from the subsidy program and its benefits.

The program is provided under the Tax Reform for Acceleration and Inclusion or TRAIN Law, the LTFRB said.

LTFRB said there are currently 85,000 active PPP card holders, 78,000 of which have received their subsidies on Tuesday.

Those without cards yet have to wait as the Land Bank of the Philippines is in the process of printing and distributing their cards.