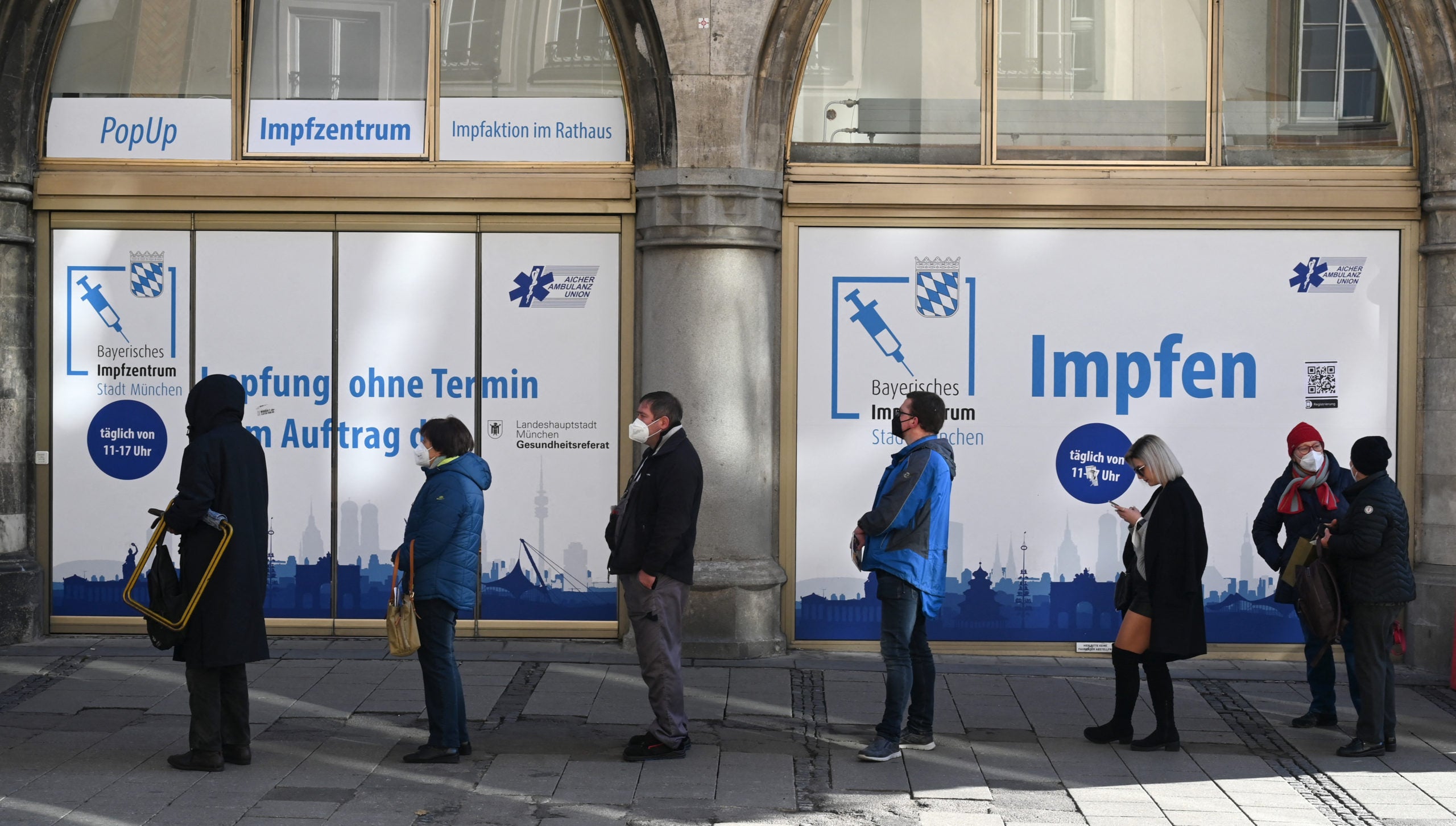 People queue outside a vaccination center in the city of Munich, southern Germany, on November 11, 2021, amid a surge of infections during the ongoing coronavirus (Covid-19) pandemic. AFP FILE PHOTO

BERLIN — Germans were warned Monday they would be “vaccinated, cured or dead” from Covid-19 by the end of winter, as Europe battles an upsurge in the pandemic that prompted a US travel advisory.

Belgium and the Netherlands are still reeling from clashes that rocked weekend protests against new anti-Covid measures.

Europe’s return to the pandemic’s epicenter has been blamed on a sluggish vaccine uptake in some nations, the highly contagious Delta variant and colder weather moving people indoors again.

“Probably by the end of this winter, as is sometimes cynically said, pretty much everyone in Germany will be vaccinated, cured or dead,” German Health Minister Jens Spahn said, as he urged more citizens to get the jab.

The State Department urged Americans on Monday not to travel to Germany and Denmark due to the soaring cases there.

The department issued Level 4 travel advisories — the highest level — for both nations, “indicating a very high level of Covid-19 in the country”.

She told a meeting of leaders of her conservative CDU party that the situation was “highly dramatic”, according to participants.

With intensive care beds swiftly filling up, Germany’s worst-hit regions have ordered new shutdowns, including the closure of Christmas markets.

The restrictions mirror those in neighbouring Austria, which closed shops, restaurants and festive markets on Monday, the most drastic restrictions seen in Western Europe for months.

Its 8.9 million people are allowed to leave home only to go to work, shop for essentials or exercise.

The Alpine nation also plans a vaccine mandate from February 1, one of few places in the world to so far to announce such a move.

“Look around you, nobody is here,” said Anelia Lyotin, manning a stall in Vienna selling nuts and dried fruit.

“This situation now is bad for everyone and the only solution is that everyone gets vaccinated,” said the 36-year-old.

Across the border in Slovakia, unvaccinated people were also facing curbs blocking them from entering non-essential stores.

But in a stark reminder that inoculation does not necessarily stop infection, French Prime Minister Jean Castex tested positive on Monday despite being fully vaccinated.

Castex, who will isolate for 10 days, tested positive after a meeting in Brussels with De Croo, whose office later announced he and several ministers would quarantine.

Renewed Covid measures have been met with frustration in several European cities, where tens of thousands of demonstrators took to the streets at the weekend.

Dozens were arrested in the Netherlands over unrest that began in Rotterdam on Friday, and Belgian police fired water cannon and tear gas at protesters on Sunday.

A crowd of 40,000 marched through Vienna on Saturday decrying “dictatorship”.

French security forces arrived in Guadeloupe after a week of unrest over Covid measures, with President Emmanuel Macron pleading for calm on the French Caribbean island.

The Red Cross said in a report on Monday that the pandemic had damaged the “fabric of society”.

It said women and migrants were among the most affected by secondary effects of the crisis such as income loss, food insecurity, reduced protection against violence and worsening mental health issues.

When that proved ineffective, he announced a nationwide lockdown, with an evaluation after 10 days.

In Germany, the EU’s most populous nation, 68 percent of the population is fully jabbed.

The country has urged all vaccinated adults to get a booster to combat waning vaccine efficacy after six months — a call echoed by two French advisory bodies on Monday.

The European Medicines’ Agency said it was evaluating an application by Johnson & Johnson to be approved as a top-up shot, having already approved Pfizer-BioNTech and Moderna boosters.