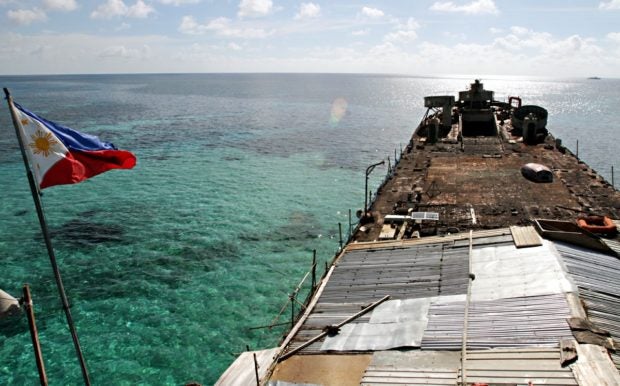 MANILA, Philippines — The government will send another supply mission to the disputed Ayungin (Second Thomas) Shoal this week after Defense Secretary Delfin Lorenzana was assured by China that it would not harass vessels bound for the Philippine-held sand ridge in the Kalayaan Islands in the West Philippine Sea.

Lorenzana told reporters on Sunday that Chinese Ambassador to Manila Huang Xilian had told him “the Chinese will not interfere” when the Philippines deploys boats to bring supplies to the Filipino forces occupying the shoal.

The defense secretary said in a text message that he has been speaking with Huang every day since the Nov. 16 incident wherein one of three Chinese coast guard vessels used a water cannon on two wooden-hulled Philippine boats on a supply mission to Ayungin Shoal. An outrigger of one boat was destroyed during the incident, forcing them to abort their mission and turn back to Palawan.

Lorenzana confirmed that he has instructed the Armed Forces of the Philippines’ Western command (Wescom) to proceed with the aborted supply mission to Ayungin.

He said there would be no Philippine Coast Guard or Navy vessel to accompany the mission.

“We will see if they are true to their word as our Navy will proceed with the resupply this week,” Lorenzana added.

In response to Beijing’s claim that the boats were trespassing and were dealt with accordingly by the Chinese coast guard, the defense secretary stressed: “They are the ones violating our sovereign rights within our exclusive economic zone (EEZ).”

He pointed out the country’s EEZ, which includes the area 370 kilometers from the Philippine mainland, was granted to the Philippines by the 1982 United Nations Convention on the Law of the Sea (Unclos) that was ratified by China.

“Therefore, they have no right to impede, prevent or harass our ships within our EEZ, whether we are fishing or bringing supplies to our detachment in the [BRP] Sierra Madre in Ayungin Shoal,” he stressed.

The BRP Sierra Madre was grounded in 1999 at Ayungin Shoal after its propellers were badly damaged and has since been converted into a makeshift detachment.

In an interview on Sunday at radio station dzBB, Wescom and Area Task Force West Cmdr, Vice Adm. Ramil Roberto Enriquez said they were fast-tracking the repair of the damaged outrigger of one of the two boats to resume the aborted resupply mission.

He explained that bigger vessels could not be used for the mission due to the risk of running aground and getting stranded.

“We use indigenous boats or local boats in Palawan for trips to Ayungin Shoal,” he pointed out.

He expressed appreciation for the support of the United States, Australia and Japan and their condemnation of the water cannon incident.

“We have not stopped patrolling our seas. No matter who blocks us we will push through with our mission at the Western command,” Enriquez said.

Australia, Japan, France, Germany, and Canada expressed their support to the Philippines against China’s latest act of provocation within the Philippines’ EEZ in the West Philippine Sea.

The five nations joined the United Nations in calling on China again to abide by international maritime laws and the July 12, 2016, arbitral ruling that invalidated Beijing’s sweeping claims over nearly the entire sea, including the Philippines’ EEZ.

“Australia has consistently expressed support for Unclos, the 2016 South China Sea arbitral award and an open and inclusive region,” said Australian Ambassador Steven Robinson, referring to the Unclos, to which the Philippines and China are parties.

“We continue to work with and support our [Philippine] partners on maritime issues and are concerned with recent destabilizing incidents in the [West Philippine Sea],” he added.

“Compliance with the 2016 arbitral award and the principle of peaceful settlement of disputes based on international law [and the] Unclos are vital for peace and prosperity for the region,” he added.

France and Germany issued a joint statement expressing “serious concerns” on the Nov. 19 nighttime incident near Ayungin Shoal, which lies 105 nautical miles (194 kilometers) west of Palawan and within the Philippines’ EEZ.

France and Germany called on China “to refrain from conduct that endangers stability in [the] IndoPacific” and “firmly support dialogue between stakeholders on the basis of international law [and the] Unclos,” they added.

“Recent provocative actions taken against [the] Philippines are inconsistent with obligations of all countries under international law and risk escalation of tensions, to [the] detriment of peace, security and prosperity,” he added.

The Department of Foreign Affairs earlier expressed “outrage, condemnation and protest” against the Chinese coast guard’s “illegal” act of blocking and using water cannons on the two boats headed to the Philippine military detachment in Ayungin.

The United States had called out China for escalating tensions and infringing on freedom of navigation and affirmed that the United States would come to the Philippines’ aid in case of an armed attack on Philippine public vessels in the South China Sea.

“The PRC (People’s Republic of China) should not interfere with lawful Philippine activities in the Philippines’ exclusive economic zone,” the US Embassy said.

“The United States strongly believes that PRC actions asserting its expansive and unlawful South China maritime claims undermine peace and security in the region,” it said.