CITY OF MALOLOS, Bulacan, Philippines — What should have been the happiest day for a 29-year-old Bulacan woman turned into a grim wedding ceremony on Thursday when she took her vows beside the open coffin of her groom, who was murdered three days earlier, at noon on Monday.

Gileen Gutierrez, who was already set to marry her partner Marco Luis Dayao on Dec. 19, decided to proceed with their symbolic “wedding” at Father’s Cradle Memorial Chapel in the City of Malolos where his wake was being held.

The photos and videos of their “wedding” posted on social media by their families and friends on Thursday, instantly became viral, drawing 496,000 views, 18,000 comments, and 63,000 shares as of Sunday.

Dayao, who would have turned 30 years old on Dec. 1, was killed after stepping out of his apartment in Busililo Apartelle that he shared with Gutierrez and their two children in Barangay Sumapang Matanda of this city, said Police Col. Manuel Lukban Jr., Bulacan police director.

Dayao responded to a telephone call asking for a meeting outside their home and was suddenly shot with an automatic weapon, Lukban said. Witnesses saw a Toyota Vios sedan speed off after the shooting, police said.

Investigators were determining if his death could be related to the “e-sabong” (online cockfighting) gaming center that he operated. The police, however, did not release any more details about the ongoing probe.

Donning her wedding gown for the marital rite that would no longer happen, Gutierrez decided to proceed with the ceremony on Thursday, a day before her groom’s remains were cremated on Friday. An evangelical pastor performed the symbolic and unofficial wedding. 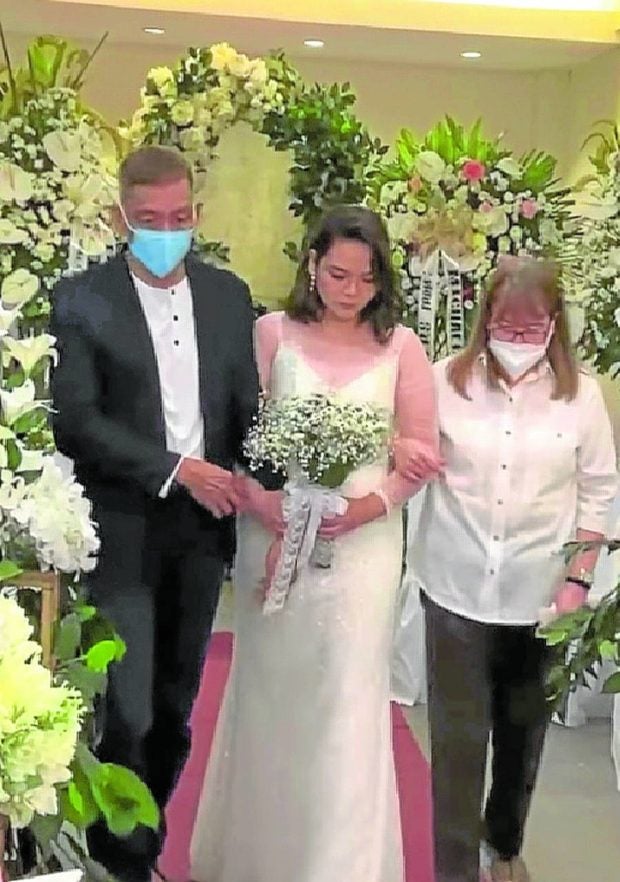 THE MARCH Gileen Gutierrez, accompanied by her parents, marches toward the coffin of her slain groom, Marco Dayao, in a symbolic wedding during his wake at Father’s Cradle Memorial Chapel in the City of Malolos on Nov. 18.

Speaking beside Dayao’s coffin, Gutierrez said, “Magpapakatatag at magiging malakas ako para sa dalawang anak natin dahil alam ko iyon ang gusto mo para sa akin, sa amin. Mahal na mahal kita (I will not break down and will stay strong for our two children because I know this is what you would ask of me, of us. I love you very much).”

The couple’s friends and family remained in shock at the brazen attack.

“Sana kinuha na lang ang pera mo. Bakit kailangan ka pang patayin (They should have simply taken your money. Why did they have to kill you)?,’ wrote a friend over social media.