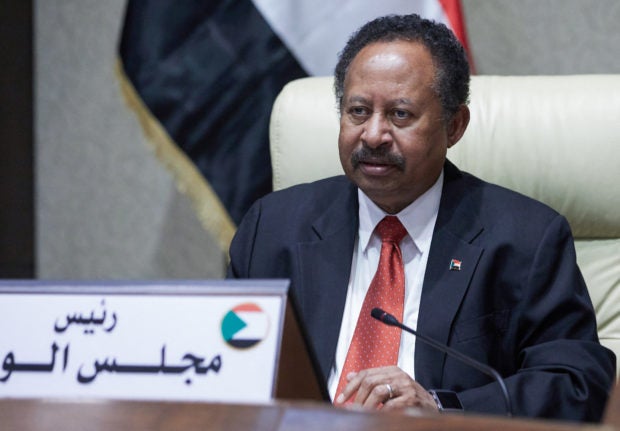 KHARTOUM, Sudan — Sudan’s General Abdel Fattah al-Burhan and Prime Minister Abdalla Hamdok have reached a deal for his return and the release the civilian leadership detained since last month’s military coup, mediators said Sunday.
“A political agreement has been reached between General Burhan, Abdalla Hamdok, political forces and civil society organizations for Hamdok’s return to his position, and the release of political detainees,” senior Sudanese mediator Fadlallah Burma, who is also the acting head of Sudan’s Umma political party, told AFP.
Burhan on October 25 declared a state of emergency, ousted the government and detained the civilian leadership.
The military takeover upended a two-year transition to civilian rule, drew international condemnation and punitive measures, and provoked large protests.
A group Sudanese mediators — including academics, journalists and politicians — who have been locked in talks to mediate a deal since the outbreak of the crisis, released a statement outlining the main points of the deal.
It includes the restoration of Hamdok as prime minister, the release of all detainees, and what it said was the resumption of the constitutional, legal and political consensus governing the transitional period.
A statement from the mediators said the deal was reached following an agreement among political factions, ex-rebel groups, and military figures.
“The agreement will be officially announced later today (Sunday), after the signing of its terms and the accompanying political declaration,” the statement said.
The deal was announced ahead of planned mass protests against the military takeover, the latest in a string of rallies that have left at least 40 people killed, according to medics.
Wednesday was the deadliest day with 16 people killed.
On Saturday, Sudanese authorities said an investigation into the killings would be launched.
Since the military takeover, Burhan has insisted that the military’s move “was not a coup” but a step “to rectify the transition” as factional infighting and splits deepened between civilians and the military under the now-deposed government.
Earlier this month, he  announced a new ruling council in which he kept his position as head, along with a powerful paramilitary commander, three senior military figures, three ex-rebel leaders and one civilian.
But the other four civilian members were replaced with lesser known figures.
The return of Hamdok, a British-educated economist who worked for the United Nations and African organisations, was a key demand of international community.
ADVERTISEMENT
FEATURED STORIES
NEWSINFO
Duterte offers OCTA fellow DOH post as replacement of Duque
NEWSINFO
Duterte sons face challengers for the first time
NEWSINFO
Holiday advisory: PH to commemorate feast of immaculate Dec. 8