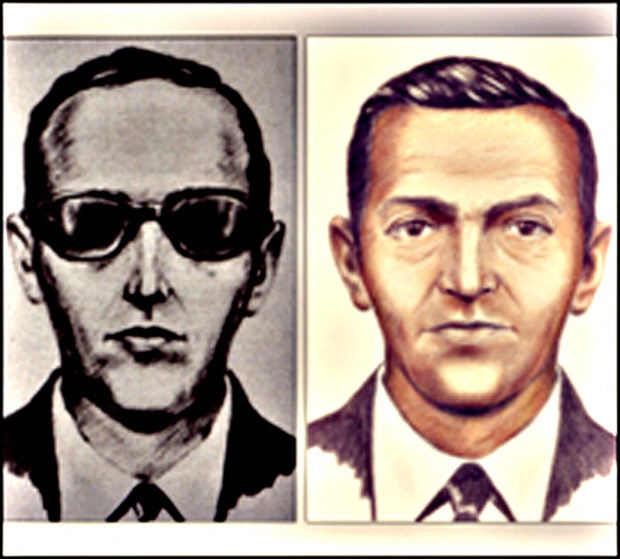 This FBI handout image obtained on March 27, 2008 shows likenesses of D.B.Cooper. In 1971, in the driving wind and rain, somewhere between southern Washington state and just north of Portland, Oregon, a man calling himself Dan Cooper leapt from a commercial jet in 1971 after collecting 200 000 dollars ransom. AFP FILE PHOTO

WASHINGTON — On the eve of Thanksgiving, 1971, a nondescript, 40-something man who called himself Dan Cooper approached the airport counter and bought a one-way ticket for the short flight from Portland to Seattle.
Within hours, he had strapped a bag holding $200,000 in ransom to himself — today worth about $1.3 million —  and parachuted off the plane, never to be found.
Fifty years after his leap into the unknown, the case of D.B. Cooper — an alias spawned by the media — remains the only unsolved plane hijacking in the history of the United States.
The US Federal Bureau of Investigation called him “a quiet man who appeared to be in his mid-40s, wearing a business suit with a black tie and white shirt.”
He ordered a bourbon and soda while waiting for the plane to take off.
His plan was fairly simple. After the aircraft departed, Cooper handed the flight attendant a note. When she didn’t immediately react, he reportedly leaned over and said: “Miss, you’d better look at that note. I have a bomb.”
After getting a glimpse of the mass of wires in his briefcase, the badly shaken flight attendant wrote down his demands — four parachutes and $200,000 — and brought them to the captain as instructed.
When the plane landed in Seattle, Cooper let the 36 passengers go in exchange for the money and parachutes, brought on board by the FBI.
Keeping the crew as security, he demanded the plane take off anew, and fly low — this time on course for Mexico City.
But somewhere between Seattle and Reno, Nevada, Cooper jumped out of the rear door of the Boeing 727 and into the bitterly cold winter night.

The FBI launched a far-reaching investigation, but after several weeks of searching in the thick, rugged forests of the American Northwest, investigators found nothing.
More than five years and 800 suspect interviews later, there were still no signs of the hijacker or his parachute.
Did he even survive the jump? Could his clothes and supplies last long in the freezing wilderness?
These questions and more remain unanswered.

“He’s a guy who presented himself in a James Bond-esque sort of manner,” said researcher Eric Ulis, whose own quest to resolve the Cooper mystery was the subject of a History Channel documentary.
Ulis, a historian, has investigated and written about the case for nearly 14 years, and he organized CooperCon, a conference for other skyjacking mystery enthusiasts.
Mary Jean Fryar, a special agent for the FBI in the 2000s, worked on the investigation.
Cooper, she said, became “kind of a folklore hero” in the United States after his high-altitude heist.
She describes the current flurry of interest around the case as like a “cult,” fueled by the fact that the hijacker has never been found.
Theories, some far-fetched, have poured in over the years, and dozens of people have claimed, sometimes on their deathbed, to be D.B. Cooper.
FBI investigators examined many intriguing profiles, like that of Barbara Dayton, an amateur pilot and transgender woman who allegedly confessed to her friends; of Lynn Doyle Cooper, whose niece became convinced of his involvement after he showed up bloody and battered to Thanksgiving dinner that year; and of Sheridan Paterson, a World War II veteran interviewed by Fryar.
The FBI finally closed the case in 2016 “to focus on other investigative priorities.”
Ulis said that federal law enforcement did “a very good job” overall, despite “a few critical errors.”
He argues that the FBI got the flight route wrong, and D.B. Cooper thus would have landed miles from the vast search area.
But the aura of mystery surrounding the affair continues to inspire Americans.
D.B. Cooper paraphernalia is readily available for sale online: fans can choose from coffee cups, T-shirts, bumper stickers and socks — and until it closed, there was even a D.B. Cooper strip club in Texas.
ADVERTISEMENT
FEATURED STORIES
NEWSINFO
Ombudsman junks bribery case vs De Lima, Dayan
NEWSINFO
No one is above the law, Bato dela Rosa tells critics of proposed amendments to party-list law
NEWSINFO
VP Duterte trades verbal punches with poll campaign rival Bello