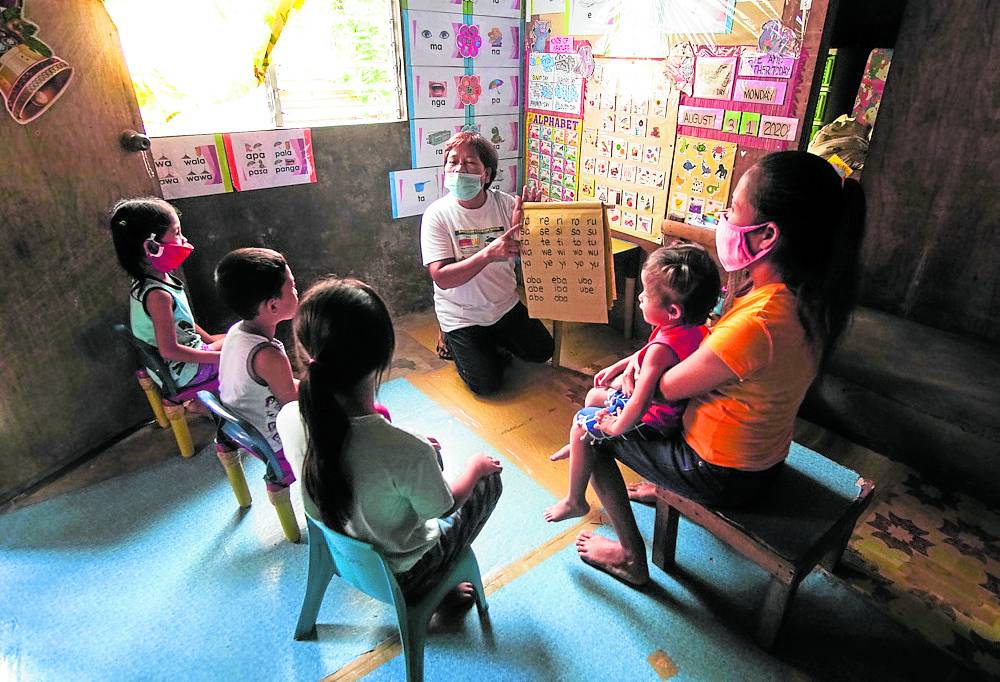 BARELY BASICS Teachers and parents at Barangay Vinisitahan, Donsol town, in Sorsogon province turn their houses into classrooms as the pandemic forced home-based schooling across the country, in this photo taken on Aug. 31, 2020. The World Bank has found that distance learning worsened the state of education in the Philippines. —MARK ALVIC ESPLANA

MANILA, Philippines — Forced by the pandemic to stay home, schoolchildren in the Philippines struggled with studying remotely, pushing learning poverty in the country to a new high of 90 percent this year, a new World Bank (WB) report showed.

The bank defines learning poverty as being unable to read and understand a simple text by age 10.

It argued that children should be able to read at this age since reading is a gateway for learning other areas—such as math, science and the humanities—as the child progresses through school, and conversely, an inability to read closes that gate.

The bank noted that although it was possible to learn later in life with enough effort, children who could not read by age 10—or at the latest, by the end of primary school—usually failed to master reading later in their schooling career.

Due to one of the most stringent and longest lockdowns in the region, the Philippines stopped in-person schooling and relied on online classes or its hybrid wherein students answered learning modules or watched television or listened to the radio for lessons.

The Department of Education (DepEd) started only this week the pilot face-to-face classes in selected schools in areas with the lowest risks of COVID-19 transmission, making the country the last in world to resume in-person schooling.

However, the World Bank said in a Nov. 18 statement that its report titled “Remote Learning During COVID-19: Lessons for Today” found that as of March 2021, distance schooling in the Philippines covered only 20 percent of households with schoolchildren—the lowest rate alongside Ethiopia.

According to its calculations, the bank said this had worsened learning poverty in the country to as high as 90 percent by August.

In 2019, or before COVID-19 struck, learning poverty in the Philippines was already at 69.5 percent.

Lack of access to the internet and slow connection also hindered remote learning.

The World Bank estimates showed that only 26.9 percent of students in the Philippines have broadband internet access.

However, a bigger 88.8 percent have access to mobile technology and broadcast media also has a relatively wide scope as TV reached 76.9 percent of learners, while 51.2 percent have radio access.

World Bank global director for education Jaime Saavedra said that hybrid learning, which combines in-person and remote learning, was here to stay and the challenge would be the “art of combining technology and the human factor to make hybrid learning a tool to expand access to quality education for all.”

“Information technology is only a complement, not a substitute, for the conventional teaching process—particularly among preschool and elementary school students. The importance of teachers, and the recognition of education as essentially a human interaction endeavor, is now even clearer,” Saavedra added.

The World Bank also noted that children’s engagement with remote learning was generally low where parents or caregivers lacked any type of education and, in several countries, these children were three to four times less likely to engage in a learning activity compared to households where parents have tertiary education, as seen in the Philippines and Peru.

World Bank surveys conducted in March showed that in the Philippines, only 9 percent of schoolchildren with older household members who had no education participated in remote learning activities.

In contrast, 40 percent of school kids with parents or guardians who had tertiary or college-level education engaged in remote learning.

For households with adults who reached primary or secondary education, the participation rates were both 16 percent.

Earlier estimates of the Manila-based Asian Development Bank showed that the Philippines likely incurred P1.9 trillion in economic losses for each year that schools were closed.