Quiboloy won’t get any special treatment from DOJ – Guevarra 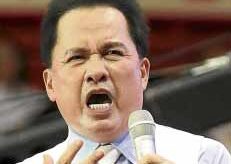 MANILA, Philippines —Justice Secretary Menardo Guevarra on Friday said that President Rodrigo Duterte’s spiritual adviser, Apollo Quiboloy, who has been indicted in the US for sex trafficking, would not be accorded any special treatment.

“The DOJ, through the IACAT (Inter-Agency Council Against Trafficking), will perform its mandate under the law, regardless of the persons involved,” Guevarra told reporters.

The IACAT monitors and oversees the strict implementation of Republic Act 9208, otherwise known as the Anti-Trafficking in Persons Act of 2003.

Guevarra added that the country has an existing extradition treaty with the United States.

Guevarra’s assurance came following reports that US prosecutors have indicted Quiboloy, founder of the Kingdom of Jesus Christ, The Name Above Every Name (KOJC), for trafficking girls and young women.

Quiboloy’s camp has yet to issue a statement on the matter.

For the time being, Guevarra said he does not see the need to contact the authorities to look for Quiboloy.

“I have no information indicating that Pastor Quiboloy will not be found in his usual residence or place of work,” he said.

He added that they have not also received any communication from the US regarding Quiboloy’s indictment.

According to Guevarra, Quiboloy has not been charged with sex trafficking or similar offenses in the Philippines.

Guevarra said the 2020 case for rape, child abuse, ill-treatment filed against Quiboloy in 2020 had been dismissed by the Davao City prosecutor.

The dismissal, he said, is currently under petition for review before the DOJ.