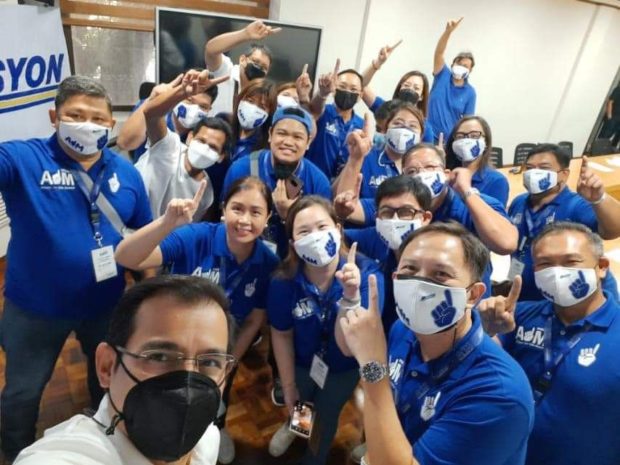 Manila Mayor Isko Moreno poses for a photo with the members of the allied group of the party Aksyon Demokratiko. Contributed photo

MANILA, Philippines — The inclusion of a group into Aksyon Demokratiko, as the official multi-sectoral arm of the party, is seen to be a boost to the presidential bid of Manila Mayor Isko Moreno, his camp said on Thursday.

According to Moreno’s campaign team, the Alliance for Isko Movement (AIM) is now the multi-sectoral arm of Aksyon Demokratiko, the party backing the local chief executive’s presidential run in the 2022 national elections.

According to AIM president Freddie Go, they signed a memorandum of cooperation with Aksyon Demokratiko because they believe in Moreno’s capability — that he is fit to be the country’s next president.

(We believe in Manila Mayor Isko Moreno’s capability, expertise and experience, and his being a leader, and we know that he should be our next president.)

During a program earlier this week, Moreno and Go signed the memroandum of cooperation before party chairperson Ernest Ramel and AIM chairman Bong Ignacio.  Aside from the officials, conveners, officers and chapter coordinators of AIM were also present during the ceremony.

“AIM is a volunteer group made up of individuals and organizations supporting Moreno’s ‘Buhay at Kabuhayan’ agenda. The group has chapters and members across the country that are actively gathering and solidifying support for Moreno to ensure his victory in the 2022 elections,” Moreno’s campaign team said.

“AIM’s goal is to further enhance and strengthen the support for Moreno’s presidential bid and encourage non-politicians to join Aksyon Demokratiko,” it added.

This is not the first group that joined Moreno to support his presidential bid: In November 2, a group which was supportive back then of Senator Manny Pacquiao bolted the Team Pacquiao and joined the Manila mayor’s camp, changing their name from MP Nation to IM4P or Isko Moreno for President Movement.