Cost of climate change in poor countries to run up to $1.2 trillion per year by 2060 | Inquirer News
Close
menu
search

Cost of climate change in poor countries to run up to $1.2 trillion per year by 2060 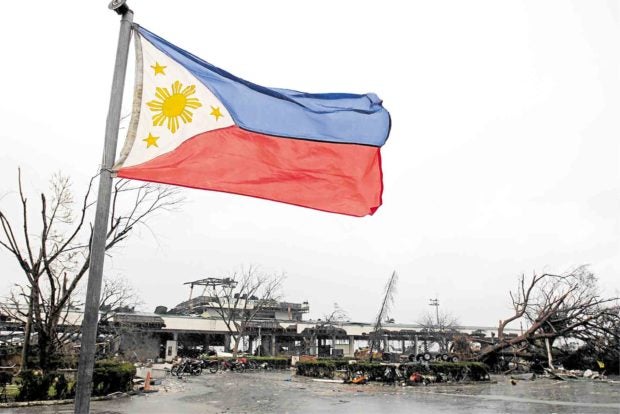 MANILA, Philippines — A regional alliance of people’s movements and community organizations said the climate debt of rich countries to developing countries far exceeds the pledged $100 billion a year in climate finance, as loss and damage due to the climate crisis became a key dispute in the recently concluded 26th Conference of the Parties (COP26) climate summit in Glasgow, Scotland.

According to the Asian People’s Movement on Debt and Development (APMDD), the cost of climate change in developing countries is predicted to run up to $1.2 trillion per year by 2060 if rich countries fail to pay up their climate debt.

APMDD executive director Lidy Nacpil said the failure of rich countries to deliver their US$100 billion annual target contributions to climate finance as agreed in 2009 has greatly dented the trust of developing countries who had incurred serious loss and damage due to climate change.

The recent tragedies brought by strong typhoons in the Philippines are illustrative, said Nacpil.

In December 2009, three months before Tropical storm “Ondoy” wreaked havoc in Metro Manila and neighboring provinces and left more than P11 billion worth of damages in agriculture and infrastructure, rich countries and big emitters of greenhouse gases promised to contribute USD100 billion annually by 2020 to developing countries to cover the cost of their climate change mitigation, adaptation, and loss and damage.

“Then Typhoon Haiyan or Yolanda was in 2013, way after they promised $100 billion. Look at the kind of loss and damage we sustained,” said Nacpil.

“So we can’t say that the effects of failing to deliver on climate finance is only counted since they made the pledge in 2009. That obligation has been there since the United Nations Framework Convention on Climate Change was ratified in 1992,” she said.

Climate finance, therefore, is an obligation of developed countries under the climate convention, and “not aid or assistance to developing countries,” said Nacpil.

“This is in recognition that indeed they are the biggest historical and continuing emitters and therefore largely responsible for this crisis. Vulnerable and impoverished countries like the Philippines share some responsibility but this is very small compared to those of wealthy nations,” she said.

Nacpil said finance for loss and damage must be considered separately from adaptation and institutional mechanisms and must prioritize the most vulnerable people.

In addition, climate finance should be delivered as public funds and not as private investments that prioritize business interests.

The country’s 18-member delegation to COP26, led by Finance Secretary Carlos Dominguez III, has committed to “demand greater accountability from Western countries that contribute and continue to contribute the most greenhouse gas emissions” and urge them to fulfill their promise of providing $100 billion in climate financing each year until 2025.

Earlier, British Ambassador Laure Beaufils said the COP26 would be a litmus test for securing global targets and nationally determined contributions “and giving the 1.5-degree goal within our reach,” as outlined in the 2015 Paris Agreement.

Beaufils said the UK government’s goal is to “mobilize finance to support countries” and “raise $100 billion a year to support developing countries in their efforts to adapt and mitigate.”

Part of this is developing a “sustainable finance roadmap and guiding principles” with the Department of Finance and the Bangko Sentral ng Pilipinas.

On Thursday, the UK government also launched a £27.5 million or P1.8 billion funding to support developing cities and regions transition to net zero emissions by 2050.

However, Nacpil pointed out that while developing countries suffer disproportionately from the adverse effects of climate change, their calls and demands are not highlighted in UN climate talks.

“They may hear, but they may not necessarily—and have not actually—responded to our demands,” said Nacpil.

She said that people and communities most affected by the climate crisis “are dealing with vaccine inequity, visa requirements, and prohibitive quarantine costs in addition to the very high financial costs and health risks of being present in Glasgow.”

For the first time in 14 years, Nacpil was not able to join the climate change conference due to logistical issues brought by the pandemic.

But while at home, her organization and other grassroots movements did street actions, protests, and debates leading up to and during COP26, sometimes even donning personal protective equipment to minimize the risk of exposure to the virus during mobilizations.

On Oct. 24, the APMDD held several bike actions in five Asian countries, including the Philippines, to push world leaders to take bolder action to fight climate change in Glasgow.

Some 300 cyclists biked in Quezon City and several hundreds in 10 other locations in the country participated in this event.

“These coordinated actions highlight the call for climate justice of people and communities imperiled by the impacts of climate change. We want to deliver a strong message that to ensure a just, safe and resilient future for us all, COP 26 must prioritize the people, not the interests of wealthy nations and big business,” said Nacpil.