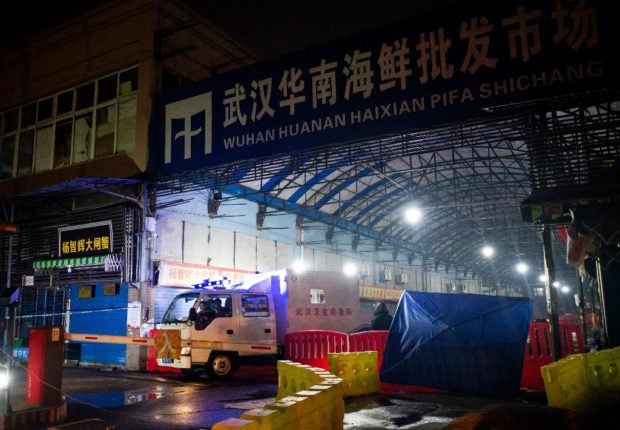 FILE PHOTO: Members of staff of the Wuhan Hygiene Emergency Response Team drive their vehicle as they leave the closed Huanan Seafood Wholesale Market in the city of Wuhan, in Hubei, Province on January 11, 2020, where the Wuhan health commission said that the man who died from a respiratory illness had purchased goods. – But a top scientist says in the journal Science on Thursday, November 18, 2021, that the first case of COVID-19 identified in Wuhan and presented as such by the World Health Organization was actually days later than previously believed and at an animal market. Virologist Michael Worobey also writes that the original patient was a woman and not a man. (Photo by NOEL CELIS / AFP)

Washington, United States — The first case of COVID-19 identified in Wuhan, China, and presented as such by the World Health Organization (WHO) was actually days later than previously believed and at an animal market, a top scientist said in the journal Science on Thursday.

Rather than the original patient being a man who had never been to the Wuhan market where wild and domestic animals were sold, the first known case of COVID-19 turns out to have been a woman who had worked in the market, virologist Michael Worobey wrote.

For Worobey, that key piece of information, and his analysis of other early cases of COVID-19 in the city, clearly tip the scales towards the virus having originated in an animal.

With no definitive evidence, the debate has raged among experts since the start of the pandemic almost two years ago over the origin of the virus.

Worobey was one of the 15 or so experts who in mid-May published a column in Science demanding serious consideration of the thesis that the virus had leaked from a laboratory in Wuhan.

In this latest article, he argued that his research into the origin of the outbreak “provides strong evidence of a live-animal market origin of the pandemic.”

One criticism of the market theory was that because health authorities raised the alert about cases of a suspicious disease linked to the market as early as December 30, 2019, that would have introduced a bias that led to the identification of more cases there than elsewhere, since attention had already been drawn to it.

To counter that argument, Worobey analyzed cases reported by two hospitals before the alert was raised.

Those cases were also largely linked to the market, and those which were not were nevertheless geographically concentrated around it.

“In this city of 11 million people, half of the early cases are linked to a place that’s the size of a soccer field,” Worobey told the New York Times.

“It becomes very difficult to explain that pattern if the outbreak didn’t start at the market.”

Another criticism of the theory was based on the fact that the first case identified was unrelated to the market.

But while the WHO report claimed the man originally identified as patient zero had been ill from December 8, he actually was not sick until December 16, according to Worobey.

That deduction was based on a video interview he found, from a case described in a scientific article and from a hospital medical record that matched the 41-year-old man.

That would mean the first reported case would be the woman who worked in the market, who fell ill on December 11.

Peter Daszak, a disease expert who was on the WHO investigation team, said he was convinced by Worobey’s analysis.

“That December 8 date was a mistake,” he told the Times.