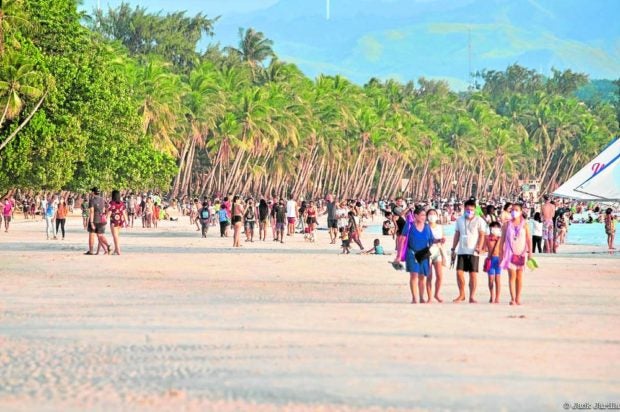 ILOILO CITY — Many tourists trying to avail of relaxed travel and entry restrictions to Boracay Island have complained of delays in the processing of their requirements, with some lamenting that they missed their flights.

The complaints prompted the Department of Tourism (DOT) to appeal to the Aklan provincial government to simplify requirements in entering the popular resort island.

Complaints have flooded the Facebook page of the municipal tourism office of Malay town in Aklan province where the 1,032-hectare island is located.

But Malay Councilor Maylyn “Nenette” Aguirre-Graf, chair of the council’s tourism committee, clarified that it was the provincial government, and not the municipal government, that was responsible for the processing of requirements and release of quick response (QR) codes to tourists. The QR code is scanned upon entry and is proof that tourists have complied with all requirements.

The loosening of restrictions was expected to boost tourist arrivals.

But among the main complaints of tourists is the delay in the release of QR codes.

“A lot of people missed their flights … because no QR codes were given … Flight tickets, hotel bookings, vacation leaves and family’s excitement were all wasted,” according to a post by Jerico Mahandog.

Gary Levy said in his post that the QR code was released an hour and 50 minutes before his flight, causing anxiety and stress.

Many also complained that their email messages and calls went unanswered.

“We have guests arriving tomorrow but they haven’t received their QR codes yet. This, in turn, creates panic and we have guests who missed their flights as they were not allowed to board the planes as they didn’t have the QR codes. This is also costing money,” a resort operator told the Inquirer but asked not to be named.

“Why does the tourist need to submit so many documents? Why are we making it so difficult for people to travel? It should not matter if you’re a tourist or a resident. Simplify the process, make it easy … less paperwork,” the business owner said.

In a letter addressed to Aklan Gov. Florencio Miraflores dated Nov. 16, Tourism Secretary Bernadette Romulo Puyat appealed to the provincial government “to streamline and simplify the travel requirements for visitors.”

Puyat pointed out that this was a “vital component in ensuring the recovery of the island’s tourism industry and workforce.”

“While the [DOT] understands the challenges and restrictions that hamper the [local government units], it notes the importance of timely facilitation of such requests imposed on the visitors by the LGUs themselves,” she said.

Selwyn Ibarreta, Aklan provincial administrator and head of the provincial COVID-19 technical working group, said they had 20 personnel validating submissions of tourists but less than half were present since last weekend due to absences and resignations.

He said the provincial government would hire more validators, add computers and improve their system in line with the new travel protocols.

Hitches in the processing of requirements, Graf said, will dampen travel to Boracay at a time when the island’s tourism industry is struggling to stay afloat after more than a year of travel and community quarantine restrictions.