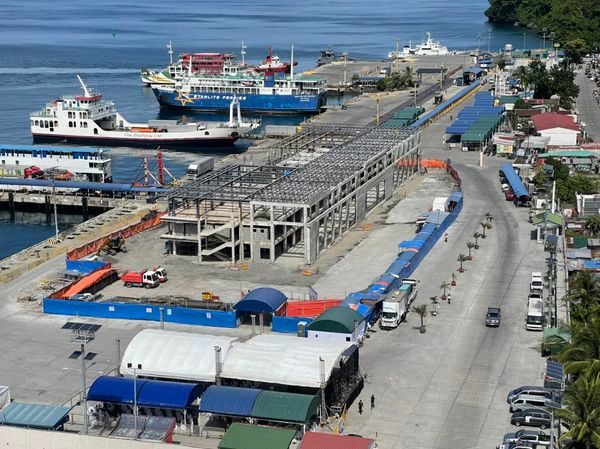 The port in the City of Calapan in Oriental Mindoro would have an expanded passenger terminal building that could serve 3,500 passengers at any given time, according to the Department of Transportation (DOTr). PHOTO COURTESY OF DOTr

CITY OF CALAPAN—President Duterte led the inauguration and inspection Thursday of government-funded seaports and a sports facility in this city.

The President first inspected the 130-million Sentrong Pangkabataan Complex project to be equipped with modern sporting facilities upon its completion. The complex, expected to be completed in March 2022, will be used by youth athletes for training and activities.

The President then led the simultaneous inauguration of eight integrated seaport development projects in Mindoro and inspection of the Calapan Port Passenger Terminal Building in this city.

Department of Transportation (DOTr) Secretary Arthur Tugade and Philippine Ports Authority (PPA) general manager Daniel Santiago joined Duterte in the ceremonial inauguration of the projects in the Port of Abra de Ilog in Occidental Mindoro; and those in Calapan, Puerto Galera, Bulalacao, Mansalay, Bansud, and Roxas, all in Oriental Mindoro.

Highlighting the simultaneous inaugurations is the ongoing expansion of the Port of Calapan passenger terminal building, which can now accommodate 3,500 passengers at any given time.

The PPA also completed the port’s access road to prevent traffic build-up in the area.

The development of the seaports in the Mindoro provinces was part of the 484 seaport projects under the Build, Build, Build Infrastructure program for the country’s economic recovery and growth, said Tugade.

The port’s PTB can now accommodate 500 passengers at any given time as Puerto Galera reopens to tourists.

The improvement of the Port of Bansud’s platform, roll-on-roll-off ramp, and pier would bolster the port’s operational capability, the DOTr said.

The expanded Port of Mansalay, meanwhile, could now accommodate the demands of shipping trade in the area. The simultaneous inaugurations of the seaports pave the way for business, employment opportunities, faster movement of essential goods between the island of Mindoro and its neighboring provinces.