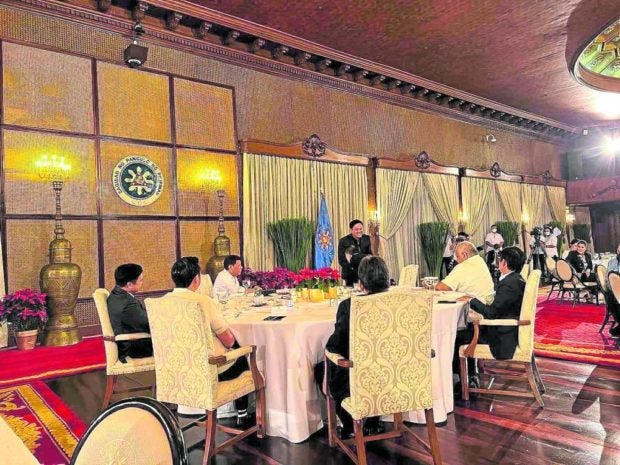 HIGH-STAKES AGENDA It was called a “casual dinner,” but there was nothing light about the reason President Duterte (third from left) invited congressmen to the Palace on Tuesday night. Among those present were Deputy Speaker and 1-Pacman Rep. Michael Romero (standing). —Photo from the office of Representative Romero

MANILA, Philippines — President Rodrigo Duterte met with around 100 members of the House of Representatives over dinner in Malacañang on Tuesday night to get their support for Sen. Christopher “Bong” Go and Davao City Mayor Sara Duterte-Carpio, who are running for president and vice president, respectively, under different political parties.

Duterte’s dinner with House allies coincided with Duterte-Carpio’s video message on Facebook on Tuesday night, where she said her call for support for herself and former Sen. Ferdinand “Bongbong” Marcos Jr., standard-bearer of the Partido Federal ng Pilipinas (PFP), was rejected by her father’s party, the Partido Demokratiko ng Pilipino-Lakas ng Bayan (PDP-Laban).

That same night, Marcos issued a statement saying he and the president’s daughter had “finished the process” of forging their alliance as running mates in the 2022 elections. Go, meanwhile, has no running mate and has said he wanted Duterte-Carpio to run in tandem with him.

On Wednesday, Duterte-Carpio accepted the offer to serve as chair of Lakas-CMD, barely a week after becoming its member. Sen. Ramon “Bong” Revilla Jr. offered his post as party chair to Duterte-Carpio who took her oath as Lakas-CMD member on the sidelines of his daughter’s wedding last week.

“I am honored to accept the chairmanship of Lakas-CMD. Together with the party, I look forward to waging a successful campaign for Uniteam BBM-Sara, with the invaluable support of our fellow Filipinos,” she said in a statement released through her spokesperson, Liloan City Mayor Christina Frasco.

Last weekend, Duterte said in an interview with a blogger that he did not like his daughter’s decision to slide down to vice president, especially since she was leading the surveys. He believed that her decision was made jointly with Marcos. The President also said he would not support the “procommunist” Marcos.

Diwa Rep. Michael Aglipay said Malacañang “reached out” to congressmen on Monday to inform them of the President’s invitation to dinner the following night, and that the list of 100 invited lawmakers was finalized.

The agenda for the dinner was to “support the Go-Duterte-Carpio tandem,” and that “all parties supportive of Go were invited,” Aglipay said.

Aglipay said 95 of the 100 guests showed up, less than a third of the House’s 299 members, for the “casual dinner” at Malacañang’s Kalayaan Hall.

Lakas-CMD members, including the party president, House Majority Leader and Leyte Rep. Martin Romualdez, were not on the guest list.

But House members doused talk of a coup in the chamber supposedly to replace Speaker Lord Allan Velasco with Romualdez, following Duterte-Carpio’s move to run under Lakas-CMD.

“There is no coup brewing in the House. The working relationship between House Speaker Lord Allan Velasco and majority leader Martin Romualdez is harmonious and in order,” said House deputy speaker and 1-PACMAN Rep. Michael Romero in a message to the Inquirer.

In a separate message, Aglipay agreed: “No coup. The parties are all solid behind the Speaker.”

“I talked with someone from Malacañang. They don’t want anyone removed, whether it is the Speaker or majority leader, so that we can focus on the pandemic,’’ he added.

Aglipay said lawmakers supportive of Duterte were at the dinner to show their “all-out support” for Go and Duterte-Carpio. “He wants continuity and support for Senator Go for president, Sara for vice president, and himself as senator,” he said.

Aglipay later clarified that the President did not mention his senatorial bid and only “endorsed” the tandem between his closest aide and his eldest daughter.

Go, who first filed his certificate of candidacy for vice president but substituted as PDDS presidential candidate after Duterte-Carpio decided to run for vice president, also spoke at the dinner and described himself as a “reluctant candidate.”

“He said he was a loyal soldier for the last 23 years, and that he is not a traditional politician and he will show people what true service means,” Aglipay said.

The meeting was a reunion of sorts for the president and friends he had not seen since the pandemic, acting presidential spokesperson Karlo Nograles said on Tuesday.

In Cebu City, acting Mayor Michael Rama and his slate on Tuesday announced their support for the Go-Duterte-Carpio “tandem.”

“The die has been cast. Consistent with our position to align with who the President anoints to lead our country after his term, and as members of PDP-Laban, our group supports Sen. Christopher Lawrence ‘Bong’ Tesoro Go for president under PDDS (Pederalismo ng Dugong Dakilang Samahan,” Rama said.

—WITH REPORTS FROM JEROME ANING AND NESTLE SEMILLA