At COP26, Japan thanked for money but criticized over coal 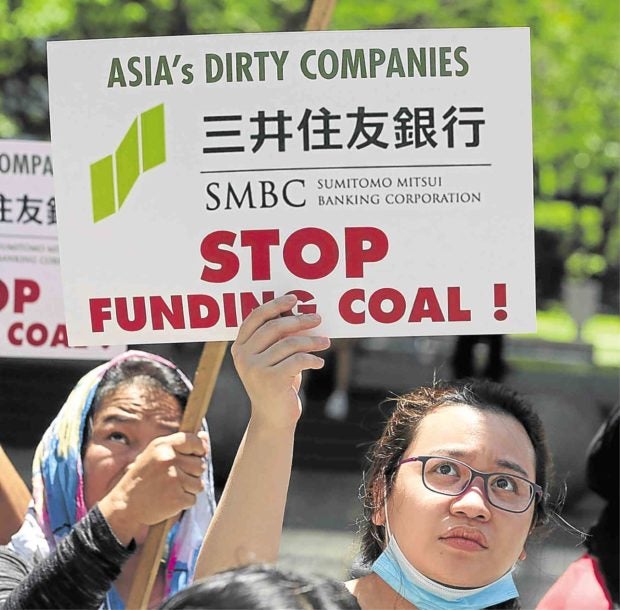 COAL PROTEST Environmental activists rally in June in front of the offices of Japanese firms Mitsui and Mitsubishi in Makati City to demand that they stop funding more coal plants in the Philippines and elsewhere. —GRIG C. MONTEGRANDE/INQUIRER FILE PHOTO

TOKYO — Britain, which chaired the 26th session of the Conference of the Parties to the U.N. Framework Convention on Climate Change (COP26), expressed appreciation for Japan’s additional financial support for a global decarbonization initiative.

Prime Minister Fumio Kishida and Environment Minister Tsuyoshi Yamaguchi flew to Glasgow for the summit, where Kishida pledged that Japan would provide up to $10 billion (about ¥1.1 trillion) in new aid over the five years for decarbonization efforts, mainly in Asia.

READ: COP26 aims to banish coal, as Asia builds hundreds of power plants to burn it

British Prime Minister Boris Johnson said Japan’s assistance was huge and would change the relationship of trust between developed and developing countries.

Developed countries had earlier pledged to contribute $100 billion annually by 2020 to help developing countries adopt clean energy, but the amount had reached only $80 billion in 2019. The shortfall has provoked a negative reaction from developing countries. With the additional financial support announced by Japan and other countries, the goal is now expected to be achieved as early as 2022.

Meanwhile, Japan proposed new international trading rules for greenhouse gas reductions, worked hard to coordinate among countries concerned and helped reach an agreement on the rules, which were the last task set by the 2015 Paris Agreement.

“Countries fell in line with Japan’s proposal,” Yamaguchi said. “This is where we felt our greatest presence.”

However, Japan came under fire over the issue of coal, as it has a policy of continuing coal-fired power generation. An international nongovernmental organization gave Japan its “Fossil of the Day” award, which mocks countries that have shown reluctance to tackle global warming.

At the ministerial meeting that started on Nov. 9, Britain and other European countries took the lead in calling for the abolition of coal. During those negotiations, the Japanese delegation did not reveal much about Japan’s position, remaining largely silent and not making its presence felt.Speech