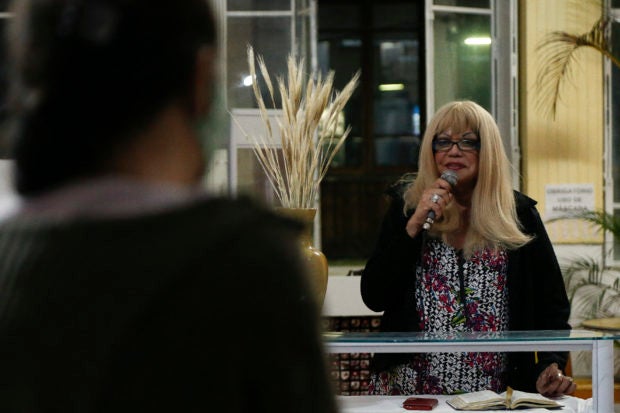 SAO PAULO — When her mother asked an Evangelical pastor to “cure” her transgenderism at age 13, Jacque Chanel never imagined she would one day be an Evangelical pastor herself.
But four decades later, she leads the first trans church in Brazil, a small, colorful sanctuary in Sao Paulo that welcomes worshippers beneath a blue-and-pink banner that reads, “I am trans, and I want dignity and respect.”
Many who attend her services are homeless, in a country that is often hostile and violent to members of the LGBT community. Brazil is one of the deadliest countries in the world for trans people, with 175 murdered last year.
“We live in a society that mistreats us, that discriminates against us. What I do here is give hope and empowerment to trans people,” says Chanel, 56, who launched the church recently in an aging building in the center of Brazil’s economic capital.
Chanel — she chose her first name in homage to Jacqueline Kennedy Onassis, and her surname for the French luxury brand — leads services that are themselves a break with tradition.
Worshippers sit in circles, not rows, and hold hands as she prays. She opens her palms as she addresses them, looking out through her rectangular glasses with the firm gaze of someone who has learned her lessons the hard way.
“I suffered a lot to get here,” she says.

Chanel was born “Ricardo,” in the city of Belem, in the northern state of Para, where her mother saw her transgenderism as an illness and placed her in the care of an Evangelical pastor.
She remembers him as a father-like figure.
“He didn’t accept me being transgender, but at least he respected me,” she says.
But her life was upturned again when she learned he had been murdered. Without him, she was no longer welcome in his church.
Brazil’s burgeoning Evangelical Christian movement — around 30 percent of the country’s 213 million people — is largely conservative, and can be hostile to those perceived as violating traditional family values.
That did not stop Chanel from spending years in search of a church that would embrace her.
“They wouldn’t have me. They would place a hand on my head and try to exorcise the evil spirits,” she says.
When she moved to Sao Paulo, she started attending church with a group of other LGBT community members.
“We would always stay in the back, until one day during services the pastor called us to the front. It was to kick us out,” she says.
Determined not to give up her faith, she kept trying different churches, until she found a group of “inclusive Evangelicals,” a movement that emerged in the 2000s to welcome LGBT Christians.
“It changed my life. But then it started to seem unjust. There were 300 gays and lesbians, and only two transgender people,” she says.
“Is that really inclusive?”
She convinced the movement to let her start her own worship group, which gathered some 200 young trans people, and to ordain her as a pastor.

Chanel opened her church six months ago, at first online, then with in-person services.
She welcomes worshippers with a meal, and also hands out food donations once a week to the poor in central Sao Paulo, whose numbers have grown with the economic turmoil caused by the coronavirus pandemic.
“When I go into a Catholic church, loads of people look at me, especially when I take communion,” says one worshipper, 42-year-old Vanessa Souza.
“Here is different. Nobody looks at me, nobody scrutinizes my clothes or calls me ‘transvestite.’ I feel at home.”
Chanel says her services have been attacked as “satanic” by conservative Evangelicals online. But her doors are open to all.
“Trans or not, I invite everyone to our weekly services. We are open to everyone,” she says.
She is awaiting her turn for gender confirmation surgery. Sao Paulo’s Hospital das Clinicas has a waiting list of more than 1,000 people for the procedure, and performs just one per month.
Chanel is in no hurry for another change, though: she has kept the name Ricardo on her official ID.
“It gives me a chance to teach people every time someone asks the question,” she says.
ADVERTISEMENT
FEATURED STORIES
NEWSINFO
Vice mayor slams Vico Sotto for turning Pasig into a ‘puro palabas’ city
NEWSINFO
‘Sampal sa gobyerno:’ Drilon wants unvaxxed PAO chief barred from working
NEWSINFO
Bongbong-Sara tandem names 7 candidates in initial senatorial slate