‘Old friends?’ For Xi and Biden, not necessarily 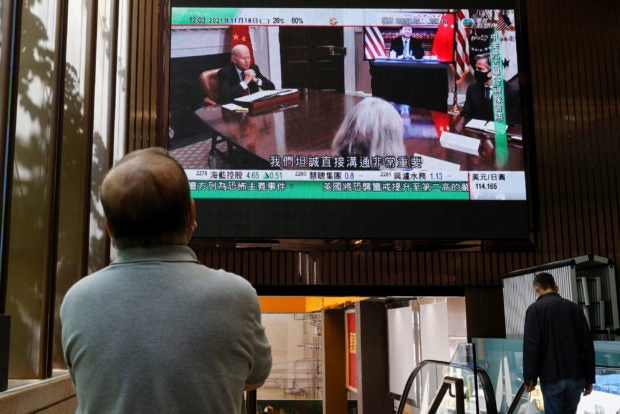 BEIJING/WASHINGTON — Chinese leader Xi Jinping greeted U.S. President Joe Biden as “old friend” at the start of their first video meeting, using an expression that Biden has pushed back on.

In China, the expression “lao peng you” connotes fondness and shows a level of familiarity and trust, and when said by Xi, 68, reflects a shared history that dates to August 2011, when the two held hours of conversations and traveled in Sichuan province – before either had reached the highest office.

Wang Huiyao, president of the Center for China and Globalization, said Xi’s use of the expression is a show of genuine goodwill.

Daniel Russel, the top U.S. diplomat for Asia under former President Barack Obama, said it was part of each leader’s seeking the “narrative high ground” at the opening.

“Xi deliberately greeting Biden as ‘my old friend’ – after Biden went on record this summer expressly denying that they are ‘friends.’ And Biden, with a toothy smile, reminding Xi that all countries – including China – ‘have to play by the same rules of the road’,” Russel said.

Shi Yinhong, professor of international relations at Renmin University of China, noted Xi’s use of the term despite the difficult state of relations.

“When we Chinese call someone an old friend, we mean we’ve known him for a long time. But an ‘old friend’ doesn’t necessarily mean he is still a real friend,” Shi said.

Given current diplomatic tensions, Biden may not want to be seen by U.S. allies and his political opponents as too much of a “friend”.

In June, a reporter asked Biden, 78, whether he might call Xi – “old friend to old friend” – seeking access for World Health Organization investigators searching for the origins of COVID-19.

“Let’s get something straight. We know each other well; we’re not old friends. It’s just pure business,” Biden said at the time.

Ahead of the meeting on Monday, White House spokesperson Jen Psaki was asked about that exchange.

“Well … I can confirm … he still does not consider him an ‘old friend,’ so that remains consistent,” she said.

Quotes from Biden and Xi at start of their virtual meeting