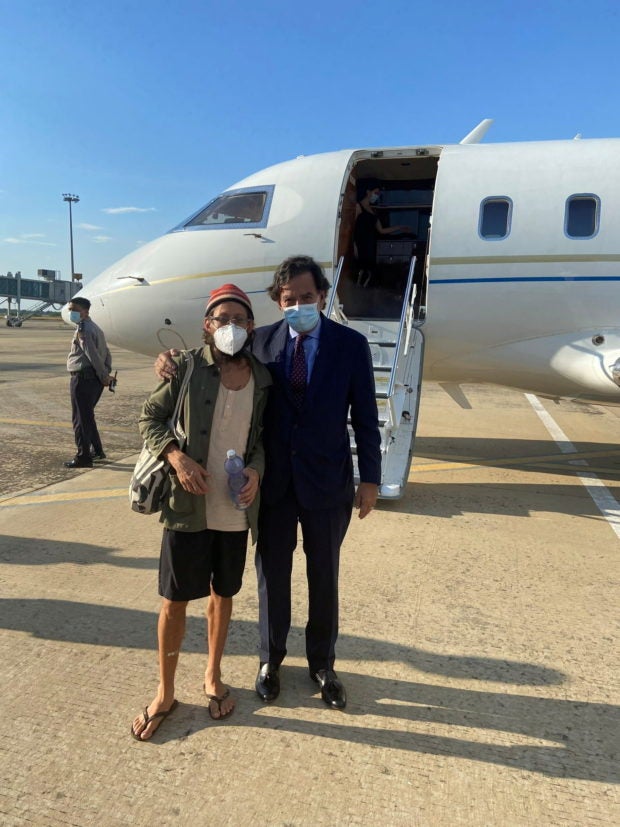 New Mexico Governor Bill Richardson poses for a picture with American journalist Danny Fenster following his release from prison in Myanmar, in this undated picture uploaded on Twitter November 15, 2021 and obtained by Reuters. RICHARDSON CENTER/via REUTERS

The U.S.-diplomat-turned-freelance-fixer, who celebrated this 74th birthday on Monday, posted a photo on Twitter that showed him with his arm around Fenster at the bottom of the steps of a jet that flew them out of the country.

The release, which brought relief to Fenster’s family in Detroit and was welcomed by Secretary of State Antony Blinken, came after Richardson met this month with Myanmar junta leader Min Aung Hlaing, one of the only foreigners to do so since he seized power in February.

Richardson’s visit earlier drew fire from activists accusing Richardson of giving the junta legitimacy, a familiar line of criticism in his more that a quarter century of dealing with notorious foreign leaders.

‘Know what makes them tick’

Richardson got his start in hostage negotiations in 1994. Then a member of the U.S. House of Representatives, he traveled to North Korea to discuss a nuclear accord struck by President Bill Clinton.

As Richardson was traveling to the country, North Korea shot down a U.S. military helicopter that had entered its territory, killing one pilot and capturing the other, and the congressman ended up staying several weeks to negotiate.

Soon after, Richardson sat down with Iraqi dictator Saddam Hussein to secure the release of two Americans detained after straying over the border from Kuwait.

“The first rule of negotiating, with me, is you’ve got to relate to your adversary personally. You have to respect them. You’ve gotta know what… makes them tick,” Richardson said on a podcast produced by Foreign Policy magazine in 2018.

“You’ve gotta let the other side save face and find some ways that they get some credit, that they’re getting something out of the negotiation, when in effect the only thing may be praise for a humanitarian gesture.”

Myanmar’s military-run TV channel said on Monday that Fenster was granted an amnesty on “humanitarian grounds.”

Richardson later served as U.S. ambassador to the United Nations and energy secretary under Clinton, before being elected governor of New Mexico in 2002. He ran unsuccessfully for the Democratic Party’s nomination for president in 2008.

Richardson and his staff at the Richardson Center for Global Engagement now frequently travel on private missions, without the U.S. government’s imprimatur, at the request of the families of people kidnapped, detained or killed in countries with testy relations with Washington.

He also worked for the release of student Otto Warmbier, who was brought back to the United States in 2017 in dire health and died soon afterwards.

Richardson dealt with Iran’s Islamist leaders to help in the release of Xiyue Wang in 2019 and Michael White in 2020.

Richardson became involved in Myanmar in the mid-1990s, he recounted to Foreign Policy, first to get the generals to release opposition leader Aung San Suu Kyi from prison and into house arrest.

He later clashed with Nobel laureate Suu Kyi over the arrest of two Reuters journalists detained while reporting on killings of Rohingya Muslims in 2017, after she had risen to de facto leader of a civilian administration. Richardson failed to get the two reporters released.