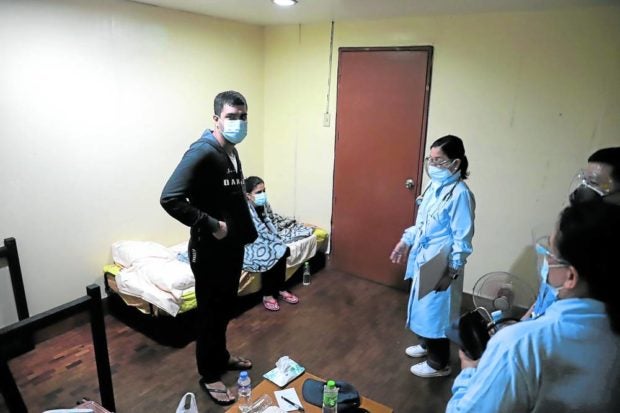 ARRESTED PHARMALLY EXECS UNDERGO MEDICAL CHECKUP: Officers of the Senate Medical and Dental Bureau (MDB) conduct a medical check-up on arrested Pharmally executives Mohit and Twinkle Dargani following their arrival at the Senate Sunday evening, Nov. 14, 2021. MDB Director Dr. Cristeta Cocjin explains to the Darganis the need to get their vital signs, medical history, and physical examination to ensure their health and well-being while they are in Senate custody. (Photo by HENZBERG AUSTRIA / Senate Public Relations and Information Bureau)

MANILA, Philippines — The hunt for two officials of Pharmally Pharmaceutical Corp. ended on Sunday with the arrest of siblings Mohit and Twinkle Dargani in Davao City.

The Darganis, who were cited for contempt by the Senate blue ribbon committee on Oct. 19 for refusing to comply with orders to produce documents related to Pharmally’s transactions with the Procurement Service of the Department of Budget and Management (PS-DBM), were apprehended aboard a Kuala Lumpur-bound chartered plane at the Davao airport.

As the two were being escorted by the arresting officers on the tarmac, Mohit made a last desperate attempt to escape by running back to the aircraft but was immediately caught by the officers and he soon calmed down, recalled the Senate sergeant at arms, Rene Samonte, a retired military general and former commander of the Philippine Air Force.

“It was a short chase and he was warned that should he attempt to do it again, he will be handcuffed,” Samonte said in a Viber message.

He said the pair was arrested at 5 p.m. on the aircraft just before it was about to depart for the Malaysian capital. It wasn’t immediately clear what their final destination was.

Based on the flight itinerary, the Learjet 60 aircraft flew from Singapore’s Seletar area and landed at Davao International Airport at 3:30 p.m. on Sunday. It was supposed to leave Davao at 4:30 p.m. and arrive in Kuala Lumpur at 8 p.m.

At Gordon’s instruction, a letter was sent to Globan seeking all documents connected to the Darganis’ attempted flight, including the flight request, manifest, contracts and forms showing “who contracted, who paid and who signed documents related to this travel.”

Malacañang was quick to take part of the credit for the arrest of the Pharmally executives.

Presidential spokesperson Harry Roque on Monday said the arrest could not have been done without the cooperation of airport officials, who are under the executive branch.

He said the executive followed the rule of law and recognized the contempt powers of the Senate, which was why the arrest took place.

Mohit is corporate secretary and treasurer of Pharmally while Twinkle serves as president. Among the documents subpoenaed by the Senate panel investigating suspected anomalies in Pharmally’s deals with the government were the company’s subsidiary ledgers, sales invoices or official receipts, and the summary list of sales.

The Senate’s security chief told the Inquirer that when they reached the Senate premises, the Darganis were already calm and Mohit even apologized.

However, he said he saw a look of panic in the Darganis’ faces.

“[They] insisted to contact their lawyer, which they did. They were somehow defiant last night, did not want to answer questions and refused to [have their photos taken],” he added.

Gordon said the Senate team had received a tip from concerned citizens that the Darganis were about to escape “via an executive privately chartered flight to Malaysia.”

“It is, however, not surprising that they sought sanctuary in the President’s hometown of Davao and plotted to execute their grand escape from there,” the senator said in a statement.

Sen. Panfilo Lacson said the arrest of the Darganis showed that not even Davao City could provide sanctuary to fugitives.

Davao Mayor Sara Duterte, however, said the arrest of the Dargani siblings only showed that the city government remained open and would not discriminate against anyone when it comes to law enforcement.

“Our city is not closed to the things that need to be enforced by the government, whether it’s from the judiciary or legislative branches of the government,” Duterte said.

Gordon thanked Senate President Vicente Sotto III for making arrangements to have a private plane take the Dargani siblings back to Manila.

“We also commend Samonte and his men for doing their job well in protecting the Senate’s enforcement of its rules,” Gordon said.

“But our task is not yet complete. The Darganis will be detained at the Senate until they tell the Filipino people the whole truth. We hope they will be more forthright in answering our questions in the next hearing on Nov. 26,” he said.

Pharmally, an undercapitalized company with a paid-up capital of only P625,000 in 2019, was the government’s biggest supplier of pandemic goods in the past two years, bagging P11.5 billion worth of contracts, most of which were coursed through the PS-DBM.

The PS-DBM, under former budget undersecretary Lloyd Christopher Lao, contracted Pharmally on behalf of the Department of Health for face masks, personal protective equipment sets, COVID-19 test kits and other medical items, after the agency transferred at least P42 billion of its pandemic funds to the procurement office last year.

The transfer was flagged by the Commission on Audit for lack of supporting documents, triggering the Senate panel to launch an investigation.

—WITH A REPORT FROM KARLOS MANLUPIG