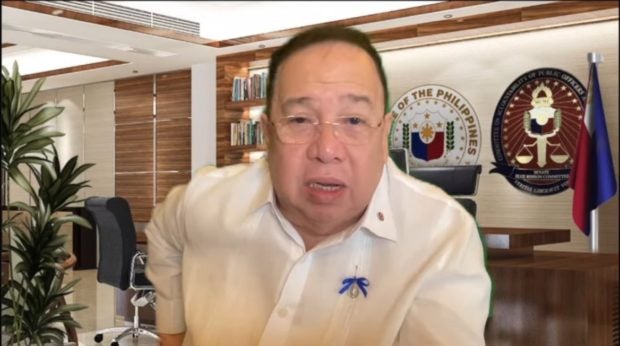 Sen. Richard Gordon during one of the virtual meetings of the Senate. Senate grab / Senate PRIB file photo

MANILA, Philippines — The Senate blue ribbon committee has sought relevant documents regarding the private flight that was supposed to carry two Pharmally Pharmaceutical Corp. executives out of the country on Sunday.

In a letter addressed to the president of Globan Aviation Corp. dated Nov. 15, blue ribbon committee chairman Richard Gordon asked for “copies of the flight request, manifest, contracts or forms showing how much, who contracted, who paid, and who signed documents related to this travel, and all the circumstances related to this flight information.”

Pharmally Pharmaceutical Corp. executives and siblings Mohit and Twinkle Dargani were arrested at Davao City Airport Sunday afternoon as they were about to fly to Malaysia.

The Senate ordered the arrest of the Dargani siblings after they were cited in contempt during the Oct. 19 hearing of the blue ribbon committee for their “refusal” to submit documents earlier subpoenaed by the panel.

According to Gordon’s letter, the flight was scheduled to leave the Davao City airport on Sunday at 4:30 pm and arrive in Kuala Lumpur at 8 p.m.