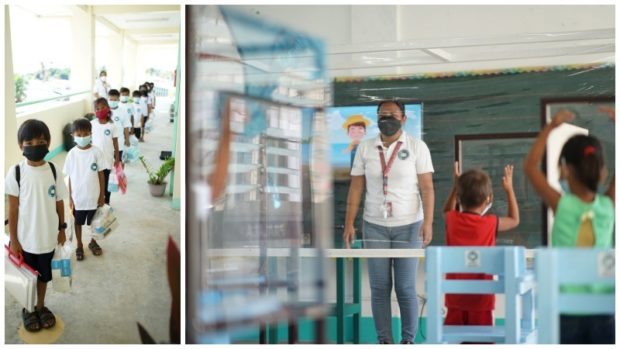 MANILA, Philippines — A hundred public schools nationwide will let students in for face-to-face classes today, making the Philippines the last country in the world to do so after more than a year of distance learning due to the COVID-19 pandemic.

A Sept. 8 report by the United Nations Children’s Fund identified the Philippines and Venezuela as the two remaining countries that have yet to return to in-person classes. On Oct. 25, Venezuela resumed face-to-face classes for its more than 11 million students.

“I will [now] be able to focus my attention on the students and their studies, but somehow I am also nervous because I was not able to teach [in person] for one year,” she told the Inquirer on Saturday.

Cabilic said that even parents, who have been clamoring to have face-to-face classes again, were thankful for LES being chosen as one of the pilot schools.

During the pandemic, their school division decided to conduct modular distance learning for LES because the students could not afford to have their own gadgets needed for online learning.

Cabilic said it was very challenging to teach under this mode because parents found it difficult to help the learners since they have their own jobs or have a lot of kids who were studying.

So when they found out that LES was chosen as one of the participating schools in the pilot implementation of in-person classes, Cabilic said they were surprised and felt lucky because it was the only school in Pangasinan to join the pilot run.

“[The parents] have long been clamoring and requesting to have face-to-face classes again so when LES was selected in the pilot study, they were very thankful,” Cabilic said.

Michelle Cas, a 26-year-old school utility worker and parent of two learners who will join the face-to-face classes, said she was happy and excited for her children’s first day in school.

Her daughter is in Kindergarten while her son, who has not experienced in-person classes yet, is in Grade 1.

“My son’s modular distance learning was quite difficult because he hadn’t had face-to-face classes due to the lockdown. He did not learn how to write his name yet so I had a hard time helping him,” Cas said in a phone interview on Sunday.

She also had difficulties in setting time to teach the kids and with the resumption of face-to-face classes, Cas said she was confident that her children would have their teacher to help and guide them thoroughly.

In preparation for the class resumption, Cas taught her children how to wake up early, change into their uniforms and do the basic health protocols.

LES has been preparing for the reopening, especially when the kids troop to the school premises.

“If before they can go straight to their classrooms, now we need to teach them how to wash their hands first and sanitize before going in,” Cas said.

Last Friday, officials from the Schools Division Office of Alaminos City visited LES during its simulation test to ensure that preparations were in place ahead of the dry run.

Cabilic said they received positive feedback and were working on some recommendations of the division office.

LES will accommodate 80 learners from Kindergarten to Grade 3 and four teachers, who have been vaccinated already, will take part in the pilot run, according to Fremilyn Ragudos Rabago, one of the school teachers.

Annalyn Sevilla, the Department of Education’s (DepEd) undersecretary for finance, said during a press briefing last week that along with the excitement and eagerness of every student to return to school, the pilot implementation should serve as their chance to prove that the youth is the nation’s hope.

“Things will never go back to normal and we are creating this ‘new normal.’ And that’s OK, we have to show them that we can do it,” she said.

If the children could demonstrate that it’s possible to build the new normal, then the adults could have the confidence that they can do it as well, Sevilla added.

Under the Joint Memorandum Circular No. 1 of the DepEd and the Department of Health (DOH), only students in the “key stage,” or Kindergarten to Grade 3 level, would be allowed to participate in the pilot run, along with secondary learners from selected senior high schools.

Education Secretary Leonor Briones said the reason why they were advised to concentrate on younger kids was that “this is an opportunity to have a major role in forming their behavior and attitude.”

According to the latest data from the DepEd’s field operations unit, 10 schools each from the regions of Ilocos, Central Luzon, Eastern Visayas, and Northern Mindanao will participate in the dry run.

“We’re all set. We completed the 100 schools and we’re still completing the 20 private schools. We also got the [approval] of local governments and the parents’ written consent,” Briones said.

Malcolm Garma, DepEd assistant secretary for field operations and the National Academy of Sports, said that the final list for private schools was still being accomplished as 57 applicants were under evaluation.

The DepEd is expected to release the official list today, or a week ahead of the scheduled pilot run for private schools.

Meanwhile, Garma noted that the DOH did not recommend the regular swab testing for the students because it might be “invasive” and “traumatic” for them.

“The nontesting of our children, especially those in Kindergarten to Grade 3, is not a DepEd policy. According to [the] DOH, we [will] only subject our learners to testing using the RT-PCR antigen testing if they manifest symptoms or if they are exposed,” he added. INQ