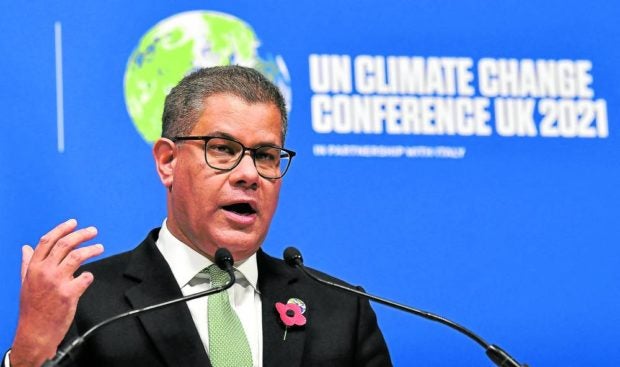 CLIMATE PACT Britain’s President for COP26 Alok Sharma rallies world leaders to keep their promises and “translate their commitments into rapid action” at the close of the COP26 UN Climate Change Conference in Glasgow on Saturday. —AFP

The meeting extended into the weekend to hammer out the divisions over finance and details of an agreed phaseout of unabated coal usage to keep alive an international goal to limit global warming to 1.5 degrees Celsius.

As United Kingdom cabinet minister and COP26 climate change talks President Alok Sharma banged the gavel on Saturday night to signal the adoption of the Glasgow Climate Pact, applause broke out throughout the conference center, but several nations were saddened by the watering down by India and China of crucial language on the unabated use of coal from “phaseout” to “phase down.”

“I am deeply sorry for the way the conference has unfolded. I also understand the deep disappointment but I think as you have noted, it’s also vital that we protect this package,” Sharma said as he held back tears. “But we can now say with credibility that we have kept 1.5 degrees (Celsius) alive. Its pulse is weak and it will only survive if we keep our promises and translate commitments into rapid action.”

The Glasgow Climate Pact requests countries to revisit and strengthen their 2030 national climate action plans in line with the Paris Agreement temperature goal by the end of 2022. The new deal also presses for more money for developing countries to help them adapt to the impacts of climate change.

Several climate-vulnerable countries, including the Philippines, were disappointed that the $100 billion pledged by rich countries was still way below their needs. Poorer countries will require up to $300 billion a year by 2030 for climate adaptation alone, according to the United Nations.

Still, the pact calls on multilateral development banks and other financial institutions to enhance fund mobilization to deliver the scale of resources needed to achieve climate plans, particularly for adaptation.

The Philippines’ proposal for a “seal of good housekeeping” ideally to be jointly undertaken by the Manila-based Asian Development Bank (ADB), the Beijing-based Asian Infrastructure Investment Bank (AIIB) and the World Bank was officially pitched through a letter sent by Finance Secretary Carlos Dominguez III, who as chair-designate of the Climate Change Commission (CCC), headed the Philippine delegation at COP26 (Conference of the Parties).

In his Nov. 7 letter to ADB president Masatsugu Asakawa, AIIB president Jin Liqun and World Bank Group president David Malpass, Dominguez said that cooperation among them in climate finance vetting would “play a pivotal role in mobilizing the trillions of dollars in private sector financing available for climate adaptation and mitigation projects.”

“The support extended by the World Bank Group, the ADB and the AIIB to the climate projects of developing economies is crucial to encourage the flow of private sector capital into these initiatives meant to help highly vulnerable countries adapt to, and mitigate the effects of, the climate crisis. Given the extensive monitoring and vetting processes of the multilateral development banks in approving projects, they are in the best position to provide the seal of good housekeeping that would spur the private sector to invest in these projects,” Dominguez said.

Current government action and pledges, if fulfilled, will mean a 2.4 C rise by the end of the century. Scientists have already warned that it would require global emissions to be cut by 45 percent, and to zero overall by mid-century.

The Paris Rulebook, the guidelines on how the Paris Agreement is delivered, was also completed at COP26 after six years of discussions. This will allow the full delivery of the landmark accord, after agreement on a transparency process that will hold countries to account as they deliver on their targets. This includes Article 6, which establishes a robust framework for countries to exchange carbon credits through the UN Framework Convention on Climate Change (UNFCCC).

Under the Paris Agreement, all countries agreed to address loss and damage associated with climate change impacts. But at COP26, rich countries have resisted providing specific funding as they did not want to accept liability and risks associated with it. The financing mechanism for the loss and damage will have to be discussed in the climate talks in Egypt next year.

UNFCCC Executive Secretary Patricia Espinosa stressed that while the climate talks achieved a progress, the “road to climate action does not end in Glasgow.”

“We are still far off the trajectory of stabilizing global temperature rise at 1.5 degrees. It is imperative we see more climate action this decade to achieve [it],” Espinosa said. “The emissions gap remains a serious threat, as do the gaps in finance and adaptation so the climate action plans of each country must be significantly boosted.”

When the United Kingdom took on the COP26 mantle, in partnership with Italy, nearly two years ago, only 30 percent of the world was covered by net zero targets. This figure is now at around 90 percent. Over the same period, 154 countries have submitted new national targets representing 80 percent of global emissions.

But climate activists said that they were also disappointed that countries argued on the recognition that dependence on fossil fuels, not just coal, must end soon.

“Without advancing a phaseout of gas and oil, the pact merely allows for them to take coal’s place in fueling climate catastrophe, and ignores the necessity of spurring all nations relying on them for energy or for sustaining their economy into urgent action in putting in place swift and just transition plans,” said Gerry Arances, lead convenor of Power 4 People Coalition. “Ending coal is the bare minimum. The climate crisis requires the highest possible ambition, especially from polluting nations.”

In the past two weeks, thousands of climate activists and civil society groups marched on the streets of Glasgow and inside the conference venue denouncing the conference a “failure.”

John Algo, executive director for programs and campaigns at Living Laudato Si’ Philippines, said that for the youth and the Philippines, COP26 was a success only if climate finance, technology and capacity-building needed to implement adaptation and mitigation strategies were secured.

“The youth has seen enough and suffered enough. At COP26 and beyond, we are watching our leaders and pressuring them to implement the type of climate actions that help limit global warming to 1.5 C. The youth has the right to have a seat at the negotiating table and influence how our present and future will be shaped,” Algo explained.

“Even during the week, I am not that optimistic that agreements will be reached which will result in 1.5 C because [the United States] and China and Australia are not still committing to cut back their use of coal. But indigenous peoples will still do their duty in protecting their forests, using their traditional knowledge and practices to do this and to adapt and be more resilient,” Tauli said.