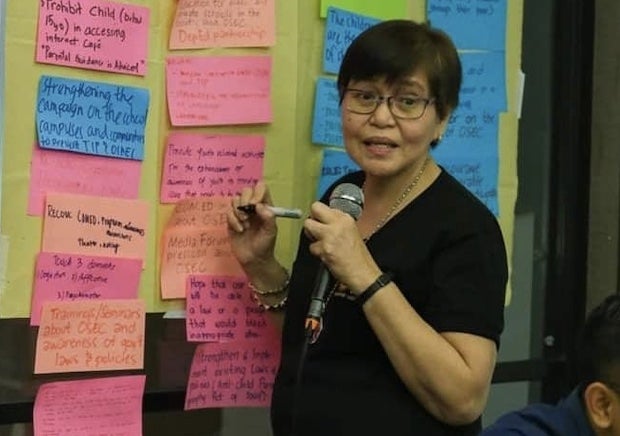 Maria Salome Crisostomo Ujano has never been in hiding, according to her daughter Karla Ujano. (Photo courtesy of KARLA UJANO)

MANILA, Philippines — A 64-year-old child’s and women’s rights leader was arrested in Malolos, Bulacan on Sunday morning for a rebellion case filed way back in 2006.

Maria Salome Crisostomo Ujano was arrested at around 10 a.m. the moment she arrived from her regular Sunday jogging, her daughter Karla Ujano wrote in a Facebook post.

The police officers who arrested her were accompanied by people in civilian clothes.

“She asked those in civilian clothes for IDs, but they could show her any. Even the arresting officer could not give her any information,” Ujano said in Filipino.

The rights leader and her family were shocked on being presented a warrant of arrest for rebellion, which was dated June 28, 2006.

According to her family, Crisostomo-Ujano also had not received any court summons before being arrested.

Crisostomo was then brought to a police station in Malolos, Bulacan before being transferred to Camp Crame in Quezon City.

“When my uncle arrived, and after being read her Miranda rights, they went to the Malolos precinct,” Ujano said. “My cousins who are lawyers also arrived. They were then taken to Camp Crame, and my brother and uncle went along with them.”

According to the Central Luzon Police Regional Office (PRO 3), Crisostomo-Ujano has been in hiding for 15 years and was arrested during a manhunt operation.

A statement posted on Facebook by PRO 3 identified the rights leader as “Crisostomo, Maria Salome y Karasig,” but her daughter listed her name on Facebook as “Ma. Salome Crisostomo Ujano.”

However, her daughter told INQUIRER.net that Crisostomo-Ujano had never been in hiding, having been active in her organizations since 1990.

She served as a member of the Women’s Crisis Center until 2007 and became the national coordinator of the Philippine Against Child Trafficking in 2008.

According to PRO 3, the warrant of arrest for rebellion — Criminal Case No. 2006-554 — was issued by Virgilio Alfajora, the presiding judge of Regional Trial Court Branch 59 in Lucena City on June 28, 2006. No bail was recommended.

INQUIRER.net  reached out to the Philippine National Police for a statement but has not received a reply as of this posting.