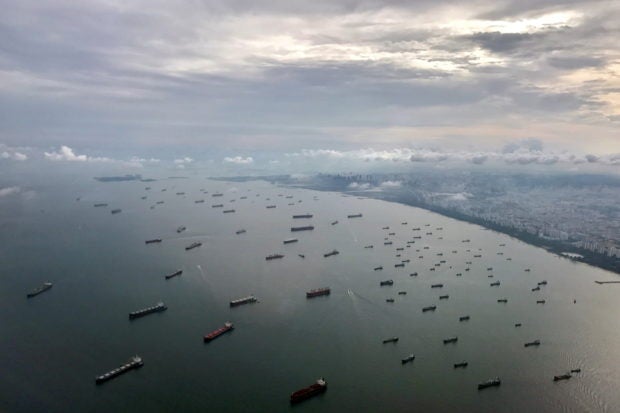 A bird’s-eye view of ships along the coast in Singapore July 9, 2017. REUTERS FILE PHOTO

SINGAPORE — More than a dozen shipowners have made payments of about $300,000 apiece to release vessels detained by the Indonesian navy, which said they were anchored illegally in Indonesian waters near Singapore, according to sources with direct knowledge of the matter.

The dozen sources include shipowners, crew and maritime security sources all involved in the detentions and payments, which they say were either made in cash to naval officers or via bank transfer to intermediaries who told them they represented the Indonesian navy.

Reuters was not able to independently confirm that payments were made to naval officers or establish who the final recipients of the payments were.

Rear Admiral Arsyad Abdullah, the Indonesian naval fleet commander for the region, said in a written response to Reuters’ questions that no payments were made to the navy and also that it did not employ any intermediaries in legal cases.

“It is not true that the Indonesian navy received or asked for payment to release the ships,” Abdullah said.

He said there had been an increasing number of detentions of ships in the past three months for anchoring without permission in Indonesian waters, deviating from the sailing route or stopping mid-course for an unreasonable amount of time. All the detentions were in accordance with Indonesian law, Abdullah said.

The Singapore Strait, one of the busiest waterways in the world, is crowded with vessels waiting for days or weeks to dock at Singapore, a regional shipping hub where the COVID-19 pandemic has led to long delays.

Ships have for years anchored in waters to the east of the Strait while they wait to port, believing they are in international waters and therefore not responsible for any port fees, two maritime analysts and two shipowners said.

The Indonesian navy says this area comes within its territorial waters and it intends to crack down harder on vessels anchoring there without a licence.

A spokesperson for the Maritime and Port Authority of Singapore, a government agency, declined to comment.

Around 30 ships, including tankers, bulk carriers and a pipeline layer, have been detained by the Indonesian navy in the last three months and the majority have since been released after making payments of $250,000 to $300,000, according to two shipowners and two maritime security sources involved.

Making these payments is cheaper than potentially losing out on revenue from ships carrying valuable cargo, like oil or grain, if they are tied up for months while a case is heard in Indonesian court, two shipowners said.

Two crew members of detained ships said armed navy sailors approached their vessels on warships, boarded them and escorted the ships to naval bases on Batam or Bintan, Indonesian islands south of Singapore, across the Strait.

The ship captains and often crew members were detained in cramped, sweltering rooms, sometimes for weeks, until shipowners organised cash to be delivered or a bank transfer was made to an intermediary of the navy, two detained crew members said.

“During the legal process, all crew of the ships were on board their ships, except for questioning at the naval base. After the questioning, they were sent back to the ships,” he said.

Stephen Askins, a London-based maritime lawyer who has advised owners whose vessels have been detained in Indonesia, said the navy was entitled to protect its waters but if a ship was detained, then some form of prosecution should follow.

“In a situation where the Indonesian navy seems to be detaining vessels with an intention to extort money it is difficult to see how such a detention could be lawful,” Askins told Reuters in an email. He declined to give details about his clients.

Marine Lieutenant Colonel La Ode Muhamad Holib, an Indonesian navy spokesperson, told Reuters in a written response to questions that some vessels detained in the last three months had been released without charge due to insufficient evidence.

Five ship captains were being prosecuted and two others had been given short prison sentences and fined 100 million rupiah ($7,000) and 25 million rupiah, respectively, Holib said, declining to elaborate further on the specific cases.