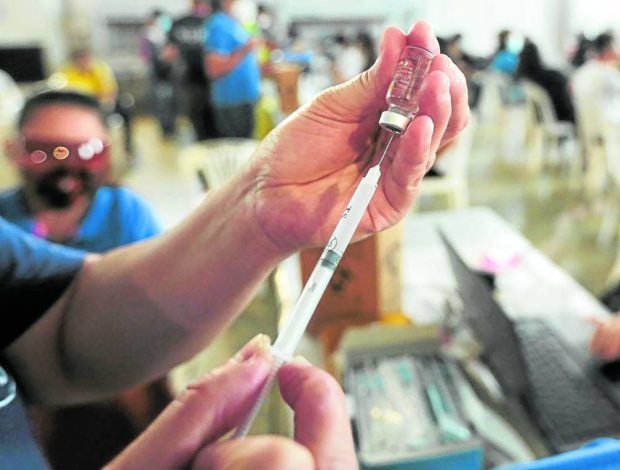 PRICKLY CONCERN Vaccine czar Carlito Galvez Jr. on Friday spoke of a current “global challenge” that would result in a “very limited supply” of syringes. He recalled that local governments were advised to procure syringes themselves early on when the national COVID-19 vaccination drive started in March. —GRIG C. MONTEGRANDE

MANILA, Philippines — The head of the government’s national vaccination program on Friday said local governments should start looking for “creative ways” to deal with a looming worldwide shortage of syringes for the COVID-19 vaccines which would eventually affect the country.

Secretary Carlito Galvez Jr., chief implementer of the National Task Force Against COVID-19 (NTF), said in a statement that this “global challenge,” which will result in a “very limited supply” of syringes, prompted national authorities to ask local government units (LGUs) to procure syringes themselves early on in the vaccine rollout, which started in March.

“We supply the vaccine doses, while the LGUs are the ones responsible for the administration. They should devise creative ways on how to produce the syringes, cotton and alcohol [needed in the inoculations],” he said.

The World Health Organization (WHO) on Tuesday warned that there could be shortfall of up to 2 billion syringes in 2022. This can hamper vaccination efforts globally if production does not improve.

Health Undersecretary Maria Rosario Vergeire said the Department of Health (DOH) anticipated this shortage in syringe supply as early as May this year, especially of the kind used to inject 0.3 milliliter per dose of the mRNA (messenger-ribonucleic acid)-type of vaccines, such as those produced by Pfizer and Moderna.

More than 34 million doses of the Pfizer vaccine have arrived in the country, the second largest after Sinovac’s 48 million.

As an alternative to the auto-disable syringes for the mRNA vaccines, Vergeire said the syringe used for testing tuberculosis had been used in the country since June.

The DOH directed its regional units to use the tuberculin syringe they had procured with their own funds instead of the limited number of dedicated 0.3-ml syringes, Vergeire said.

The tuberculin syringe is a relatively small type of syringe with a capacity of 1 ml. It is used to test for tuberculosis through subdermal (beneath the skin) injection.

Vergeire said the DOH had ordered 44 million 0.3-ml syringes from the United Nations Children’s Fund but the delivery had been delayed due to the “apparent global shortage.”

She said that for other types of vaccines, “there is no problem,” as there are “a lot of commodities” in the country’s storage facilities that could be used for the other jabs.

The vaccine produced by Moderna is also of the mRNA type but each jab is 0.5 ml. Others made by China’s Sinovac and Russia’s Gamaleya are also 0.5 ml per dose.

Majority of the syringes used for COVID-19 inoculation in the country are imported, according to Maria Cecilia Matienzo, director of the center for device regulation, radiation, health and research of the Food and Drug Administration.

There are about three local manufacturers of syringes, Matienzo told the Inquirer.

Health Undersecretary Myrna Cabotaje, chair of National Vaccination Operations Center (NVOC), said there were about 5.9 million syringes which are compatible with most vaccine brands and “are available in warehouses.”

Based on figures reported by the government as of Nov. 11, the country has 54,263,135 available doses of various brands of COVID-19 vaccines. There are no figures to show that there are enough syringes to administer all the shots.

LGUs in the Bicol region, particularly Sorsogon and Camarines Sur provinces, had pointed to the problem of syringe shortage which they said could slow down their vaccinations.

In a radio interview on Monday, Sorsogon Gov. Francis Escudero complained that there were no syringes that accompanied some 46,000 doses of the Pfizer jab which arrived in his province last week.

As of the Nov. 2 data from the NVOC, Bicol has the second least number of fully vaccinated individuals—13.9 percent of its 6 million population. Bangsamoro Autonomous Region in Muslim Mindanao has the smallest proportion—6.9 percent of 4 million.

Lisa Hedman, the WHO’s senior advisor on access to medicines and health products, said on Tuesday in Geneva, Switzerland, that the supply of syringes must keep pace with vaccine production.

“We are raising the real concern that we could have a shortage of immunization syringes, which would in turn lead to serious problems, such as slowing down immunization efforts,” she said.

More than 6.8 billion doses of COVID-19 jabs had been administered globally so far.

The French news agency Agence France-Presse (AFP) said its own tally showed that more than 7.25 billion COVID-19 vaccine doses have been administered globally. That is nearly double the number of routine vaccinations given per year—and twice the number of syringes required.

Hedman said delays in routine vaccinations could have a public health impact “for years to come” if a generation of youngsters miss out on normal childhood vaccinations.

Shortages could also lead to the unsafe practice of reusing syringes and needles since harmful bacteria will remain even after sterilization, according to the WHO.

Hedman said any constraint on syringe supply could only be worsened by export restrictions and transportation problems.

She noted that syringes were particularly prone to transport delays because they took up 10 times the space of a vaccine. —WITH a report fom AFP

Read Next
MMDA eyes reimposition of number coding scheme
EDITORS' PICK
OVP: Pilot’s claim vs Robredo ‘never happened’, a ‘malicious fabrication’
Honolulu Café is the cure for your Egg Tarts and Roastings cravings
Petition to reverse Comelec decision on Bongbong Marcos’ DQ case reaches SC
PH detects local transmission of Omicron subvariant BA.2.12.1
House energy committee chair Arroyo bats for cheap electricity
Luxe property: A way to build, preserve wealth
MOST READ
Heart Evangelista gets a ‘no’ from Chiz Escudero after asking, ‘Do I deserve a bag?’
CebuPac places pilot under disciplinary review after ‘baseless’ post vs Robredo
Man posing as Marcos spox revealed to be an inmate in Bilibid — Guevarra
Young, poor and from minorities: the Russian troops killed in Ukraine
Don't miss out on the latest news and information.