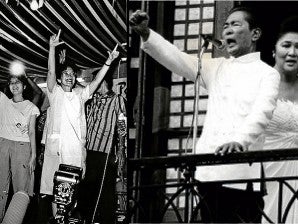 PARALLEL LIVES. The late President Cory Aquino with daughter Kris raises her hands in triumph during a campaign stop in Bicol for the 1986 snap presidential election. At right, the late dictator Ferdinand Marcos’ last hurrah with wife Imelda at the Malacañang balcony shortly before the Marcoses had to flee the Palace on Feb. 25, 1986, to escape the angry mobs at the Palace gates, and were flown to Hawaii.

As a divided nation on Saturday marks the 26th anniversary of the 1986 “people power” uprising, President Benigno Aquino III and human rights groups on Friday appeared agreed on one thing—the historic Edsa upheaval that chased away a dictator remains an unfinished revolution.

Speaking before soldiers and police officers at a homesite being built for their benefit under the administration’s housing program, Mr. Aquino said he needed the cooperation of Filipinos to finish the fight.

“With the things happening around us, it’s clear that the fight that started in Edsa in 1986 is not yet over,” Mr. Aquino said on the eve of the 26th anniversary of the uprising that installed his mother, the late Corazon Aquino, to the presidency.

Mr. Aquino spoke at the ceremonial turnover of 1,500 housing units to beneficiary soldiers and police in Barangay Luciano in Trece Martires City, Cavite.

Saturday’s commemoration of the 1986 uprising comes in the midst of political feuds—Chief Justice Renato Corona is undergoing an impeachment trial for alleged constitutional transgressions, while Mr. Aquino’s predecessor, former President Gloria Macapagal-Arroyo, has just been arraigned on a charge of electoral sabotage.

“I need your help to end this fight. Are we going to allow ourselves to again be fooled by the greedy and those who abused their posts? Are we again going to allow those who caused suffering in the country to return to power?” Mr. Aquino said.

“No. I don’t think we are going to allow that to happen.”

“Let us just consider the coming days when we can bequeath to the next generation a Philippines that is really different from the one we came upon,” he said.

Mr. Aquino is scheduled to attend Edsa Day ceremonies at the People Power Monument in Quezon City this morning. He is also scheduled to lay wreaths at the monuments to his mother and to the late Jaime Cardinal Sin in Manila.

It was Sin who called the people to mass on Edsa on the first night of the 4-day People Power Revolt in February 1986.

“This administration remains committed to fulfilling the promise of Edsa. We are continuing to work to achieve a country where progress is inclusive and where justice is dispensed fairly to all,” deputy presidential spokesperson Abigail Valte said in a statement.

Civil society groups marked the Edsa anniversary by picketing the Supreme Court to demand the resignation of Corona.

About 500 protesters demonstrated on Padre Faura Street and called on Filipinos to relive the “spirit of Edsa” and to stand up against its modern-day enemies “exemplified,” they said, by Corona.

“Twenty six years ago, we removed a dictator by harnessing our strength as a people. We are urging again the people to harness that power, this time to remove the crown of Chief Justice from Corona’s head,” Akbayan spokesperson Risa Hontiveros said.

Protest leaders called on Filipinos to mount “a new type of people power” against Corona, adding his actions as Chief Justice were an affront to the “ethos” of Edsa.

“This new type of people power must be based on active citizenship, informed actions and strong vigilance. Corona is counting on the people to embrace apathy and pessimism while his defense team distracts them with their courtroom antics and legal drama. We will not give Corona that opportunity,” Hontiveros said.

Leah Navarro, another rally leader, said: “Regardless of the numerous legal obstructions set up by Corona’s camp even going to the point of hiding their client behind the Supreme Court, we still have full trust in the impeachment court and are confident that Corona will be convicted.”

But not everybody agreed with the ralliers.

Lingayen-Dagupan archbishop emeritus Oscar Cruz, in a phone interview, warned that President Aquino could himself face a “people power” revolt leading to his downfall if he continued to offend churches and religious faiths.

Cruz cited Aquino’s supposed failure to respect the beliefs of others in crafting government policies, such as the controversial reproductive health issue.

“(People power) is a possibility because the Chief Executive is showing less and less consideration for the beliefs of others contrary to his own. When the churches, sects and religious movements of different creeds find themselves harmonious in supporting a common stand, then they become a rather formidable moral power,” Cruz said.

“Edsa People Power I and II were led and inspired by the Catholic Church. Now, it is not a moral impossibility that some kind of a ‘people power’ could be staged by a multi-church people,” he said.

He added that even the military could intervene since soldiers were also “believers.”