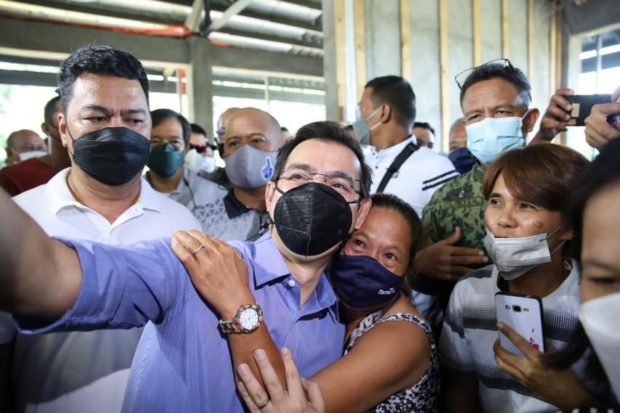 Manila Mayor Francisco “Isko Moreno” Domagoso gets a warm welcome from a local supporter during one of his community visits and “listening tour” in different parts of the country. Contributed photo

CABUYAO, Laguna — Manila Mayor Francisco “Isko Moreno” Domagoso said on Friday that under his presidency, he will focus on the minimum basic needs of the people which includes housing, health, education and employment.

“I am a believer of minimum basic needs. This is the reason why in Manila, we focused on mass housing intended to provide decent shelter for informal settlers, we built new hospitals, and new school buildings,” Moreno told reporters in an interview.

The Aksyon Demokratiko presidential aspirant also vowed to provide employment for the people, especially those who lost their jobs due to the COVID-19 pandemic.

“I will make sure na may trabaho ang mga magulang nila. First things, first. While it is true that we provide free education, ang estudyante, kailangan pa ring kumain, kailangan pa ring mamasahe para pumasok sa pag-aaral. Pag may trabaho ang ama, ang ina, mairaraos pamilya nila,” Moreno said in an ambush interview at the sidelines of his dialogue with the youth sector in this city.

Moreno said while he will continue with the “Build, Build, Build,” one of his priorities is the the building of first-class public schools comparable to that with private schools in terms of facilities and amenities.

“We will not just build an ordinary school. We will build more facilities within a building to make our  public school system competitive with private schools,” he said.

The 47-year-old Manila mayor said this has been done in the Philippine capital, citing the 10-story fully airconditioned buildings in Rosauro Almario Elementary School, Manila Science High School, and the Albert School that included a 1.5-hectare land development.

“Next important is connectivity. We will invest more with our bandwidth to make it available to our students in relation to future blended distant learning,” said Moreno.

In Manila, students were provided with monthly 10 gigabytes of free data for their blended learning. Next year, Manila students will receive free 20 gigabytes per month with rollover courtesy of the local government.

The Manila city government is currently constructing four vertical housing projects for poor families and informal settlers: Tondominium 1, which is set to be completed by December 2021; Tondominium 2 and Binondminum 1 and 2 which are targeted to be done by January 2022.

Moreno said about 1,000 more housing units for informal settlers will be built in the city: the 20-story nigh San Lazaro Residences, Pedro Gil Residences, and San Sebastian Residences.

Knowing that education is vital in having a better future, Moreno also embarked on building modern public school buildings.