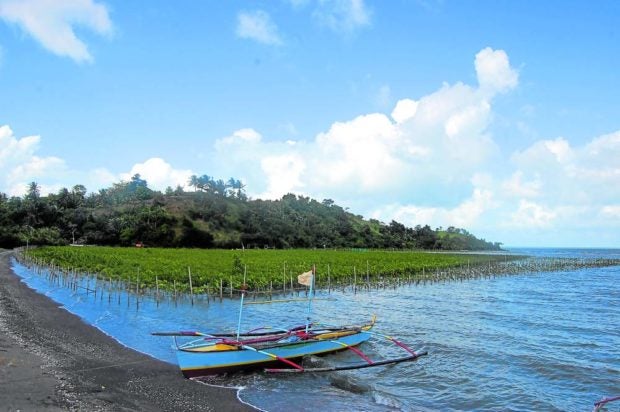 NATURAL BARRIER Mangroves, like this one in Camarines Sur province, play an important role in protecting coastal communities from erosion, storm surge and tsunami. The removal of mangroves increases the vulnerability of some of these communities. —INQUIRER PHOTO

These were worsened by human activities including the illegal removal of corals and mangroves in the area and the improper construction of coastal infrastructure.

“The destruction of natural barriers such as coral reefs and mangroves has increased the vulnerability of some communities in southeastern Luzon. Unlawful removal of coral reefs, which help reduce wave impacts on the coast, has been observed in a number of areas. Several mangrove forests have also been partially or completely removed through the years due to the expansion of communities and fishponds. Some mangroves have also been tapped as sources for coal on charcoal on the anecdotal accounts provided to the survey team,” the MGB said.

“With these observations, coastal hazards in southeastern Luzon are clearly becoming a potential creeping crisis.”

MGB Director Wilfredo Moncano said in an interview with the Inquirer that part of their recommendation to the concerned local governments was the relocation of some coastal communities included in the report, but noted that it would still be up to local officials on whether they would heed the bureau’s call.

“They have to decide considering the exposure to danger, the frequency of these dangers, their constituents, and the fiscal position of the respective [local governments],” he said.

Apart from human activities, the construction of ports and other infrastructure in the coastal areas were also identified as among the factors that are causing erosion.

While mining and quarrying operations are not allowed near the coastline, illegal operations may not be disqualified as a cause of worsening climate hazards, an MGB official noted.

Seawalls, in this case, may only provide a “false sense of security” as communities at risk ended up expanding behind these structures following their construction.

The result of the MGB’s assessment should not be taken lightly as projections over the coming decades point to graver natural disasters that could lead to the loss of jobs and lives.

“Over the coming decades, the projected acceleration in sea level rise and greater frequency of strong typhoons in response to climate change is expected to increase the impacts of coastal erosion and storm surge in southeastern Luzon,” the MGB said.

The bureau called for a “coordinated approach” at all levels of governance in identifying regional and local science-based coastal hazard management strategies and policies to minimize the impact of future disasters.

Cumulative coastal erosion is already occurring in several areas in Camarines Sur and Quezon provinces, the MGB warned. This happens when local sea levels rise due to coastal flooding.

At its worst, this could lead to perpetual flooding and certain areas may have to be surrendered to the oncoming tides.