newsinfo / Nation
Nation
We will also be faithful to our farmers, fishermen

Isko Moreno: We will be fearless in defending WPS; fair in discussing arbitral ruling 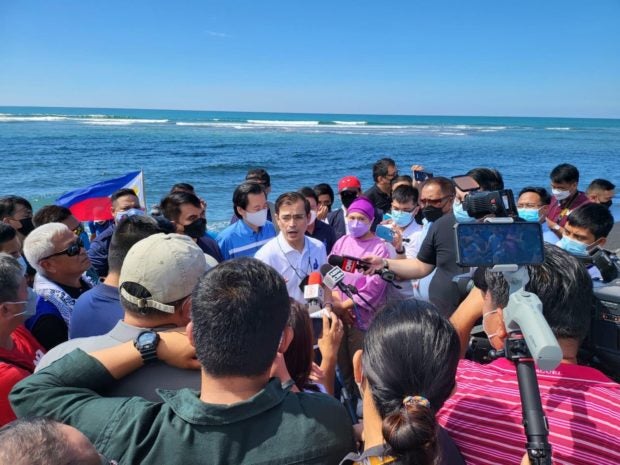 In a media interview held in Zambales with the West Philippine Seas as background, Moreno said he will assert the Hague Ruling and build the country’s capacity to defend its waters in securing unimpeded access for small fisherfolk to abundant fishing grounds.

“We will be fearless in fighting for what is ours. We will insist the Hague Ruling. But at the same time as being fearless, we are going to be fair with our discussion and management of the situation on both sides,” said Moreno.

Moreno, his running mate Dr. Willie Ong and senatorial bets Samira Gutoc, Dr. Carl Balita and Jopet Sison met with 100 fisherfolks and their families in this town to hear their sad plight as a result of the Chinese vessels’ presence in Panatag (Scarborough) Shoal.

Locally known as Panatag or Bajo de Masinloc, the shoal serves as the traditional fishing ground of Filipino fishermen as it is situated inside the country’s 370-kilometer exclusive economic zone.

Almost all fishermen in this province have stopped fishing at the shoal since they experienced harassment from the Chinese coast guards and due to the depletion of the fish population.

“Chinese fishermen have been overfishing, depleting our marine resources. They even sell their catch to our fishermen at higher price,” Moreno said quoting stories from Zambales fishermen.

Aside from diplomatic negotiations, the 47-year-old mayor said he will modernize the Philippine Navy and Philippine Coast Guard and improve the country’s lines of defense on its western coast.

“I will reinforce our Navy and Coast Guard. We will invest more on the western side of the country, so that we can protect our sovereignty and territorial jurisdiction as recognized by (the) UN and all other nations,” Moreno said.

The Chinese Coast Guard had used water cannons and sometimes rammed the boats of Filipino fishermen to drive them away from the shoal.

China, which claims nearly all of the South China Sea, seized control of Panatag in 2012, prompting the Philippines to seek UN arbitration. In 2016, the arbitral tribunal invalidated China’s sweeping claims, but China continues to ignore the ruling.

The Chinese vessels are moored within the country’s 370-kilometer exclusive economic zone (EEZ) where the Philippines has the sole and sovereign right to fish and exploit the marine resources.

“Ang maganda sa eastern board, wala naman tayong kapitbahay. Sa western board, from Tawi-Tawi to Batanes (meron). That’s how we’re going to do it,” he added.

Moreno also said he plans to strengthen the country’s Mutual Defense Treaty and Visiting Forces Agreement with the United States.

Moreno, however, said he is not currently inclined to invite the US to reinstall military bases in the Philippines.

“We have to study that. In fact, yesterday, we were in SBMA. The former US military base gives us some economic development there, which needs improvement. But bases, actually, sa ngayon, sa totoo lang, dagat lang, okay na. Kasi ang kailangan natin, archipelagic protection. Because we are an archipelagic country,” said Moreno.

Nonetheless, trade treaties and agreements with the country’s regional neighbors, even claimants to the West Philippine Sea and economic rivals of the US, will continue under his administration, Moreno said.

“Treaties will be recognized. Trade with America, Vietnam, China and all other nations will continue because (the) WPS issue is far different from our economic issue in terms of trade. We’ll take that as an opportunity for us to gain, for the people to gain, for the country to gain,” said Moreno.

In terms of budget, Moreno said the national government’s security spending will focus on external defense should he be elected president.