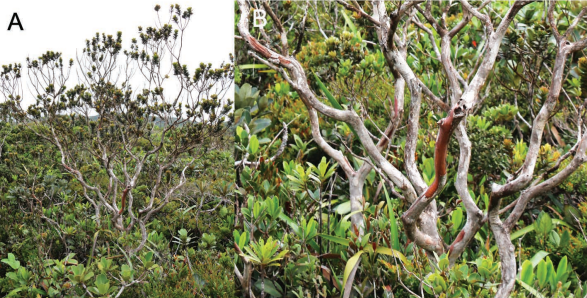 PHOTO COURTESY: Tristaniopsis flexuosa. From an article submitted by Professor Edwino Fernando and Dr. Peter Wilson of the Australian Institute of Botanical Science to Telopea, the Journal of Plant Systematics.

MANILA, Philippines — Botanists have discovered an endemic tree species that can only be found in the Dinagat Island.

University of the Philippines-Los Baños (UPLB) Professor Edwino Fernando and Dr. Peter Wilson of the Australian Institute of Botanical Science submitted an article in Telopea, the Journal of Plant Systematics in October their findings of a new tree species named Tristaniopsis flexuosa.

The tree is only 3 meters tall and can only be found in Mount Redondo on Dinagat Island.

The tree was named ‘flexuosa’ because of its crooked branches. It also has small leaves with smooth grey bark and a red-brown under-bark.

There are four other Tristaniopsis species discovered in the Philippines according to researchers, but the flexuosa does not bear “clear affinities” to them.

“Tristaniopsis flexuosa does not show clear affinities to any other Philippine species. Morphologically, it most nearly approaches Tristaniopsis elliptica, a species from Borneo that occurs on ultramafic substrates at some locations, particularly in the vicinity of Mount Kinabalu,” the researchers said in their paper published in Telopea.

“The two species are likely to be sister taxa but their respective geographic areas are about 1000 km apart and have been separated since the formation of the Sulu Sea from the early to mid-Miocene through to the late Miocene when it reached its present extent,” they added.

A specimen of the new tree species was deposited at the UPLB Museum of Natural History and Forestry Herbarium and Wood Collection, according to a UPLB report.