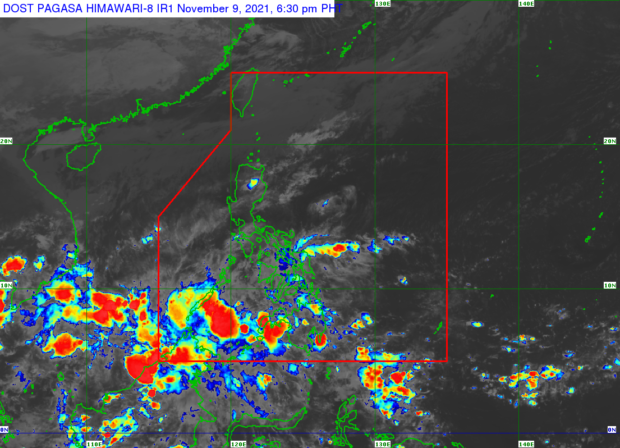 MANILA, Philippines — The shear line will bring rain over the Bicol Region, Palawan, Kalayaan Islands, and Eastern Visayas on Wednesday, according to the latest bulletin of the Philippine Atmospheric, Geophysical and Astronomical Services Administration (Pagasa).

According to Pagasa weather specialist Ariel Rojas, this is because the axis or the tail end of the shear line (where the winds of the northeast monsoon and easterlies meet) has already reached these areas.

(Our reminder is that there are occasions when heavy rains can cause floods and landslides, so we remind the people in Bicol and Palawan to be extra careful and prepared.)

Meanwhile, the northeast monsoon will also cause cloudy weather in the Cagayan Valley Region and Kalinga, Apayao, Mountain Province, and Ifugao. But only light rain is expected to prevail in these areas, according to the state weather bureau.

The rest of Luzon, on the other hand, will experience generally fair weather.

While Eastern Visayas would feel the effects of the shear line, the rest of the region and the whole of Mindanao will experience hotter and more humid weather on Wednesday.

But thunderstorms could still be expected in these areas during the afternoon and evening, with Rojas even warning of possible severe thunderstorms in Mindanao.

Rojas also said no storms are expected to affect the country in the next three to five days.

As for temperature ranges in key cities/areas across the country on Wednesday, Pagasa’s forecast states:

Finally, Pagasa said a gale warning would remain over the seaboards of Batanes and Ilocos Norte, as well as the northern coast of Cagayan, including the Babuyan Islands, due to the effects of the northeast monsoon or amihan.