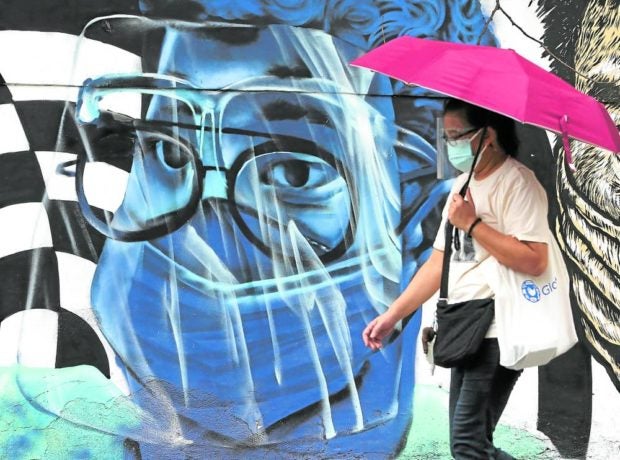 SHIELD ON: A mural in Manila depicts a man wearing a face shield as the debate on its use outdoors continues. (File photo by MARIANNE BERMUDEZ / Philippine Daily Inquirer)

MANILA, Philippines — Local executive orders making the use of face shields are not “null and void,” as Malacañang announced, but may be enforced, Interior Secretary Eduardo Año said Monday.

Presidential spokesperson Harry Roque announced that executive orders issued by Manila and Davao City on the use of face shields violated national policy.

“They’re not null and void because local government units, the local chief executives, based on the Local Government Code, in order to provide service and protect the people, can enact ordinances and executive orders,” Año said in Filipino in a chance interview at Villamor Airbase in Pasay City.

Año said he would not take such orders against LGUs as long as their areas were already deemed low risk for COVID-19.

“The situation has changed now. Look at Metro Manila, it’ now is under Alert Level 2. We are already at low risk. So that’s allowed” he said.

“For those LGUs at low risk, I will not hold it against them,” he added.

However, he said it would be better if the policy would be formalized through a resolution issued by the national government.

According to Año, the Inter-Agency Task Force for the Management of Emerging Infectious Diseases is thinking about scrapping the mandatory face shield policy in low-risk areas, except in places such as hospitals and vaccination sites.

“The IATF is considering that. It’s just that we were short on time because of so many issues [that had to be discussed. So we were not able to talk about that,” he said.

The IATF’s technical working group is set to present its recommendations on the use of face shields on Thursday, he added.