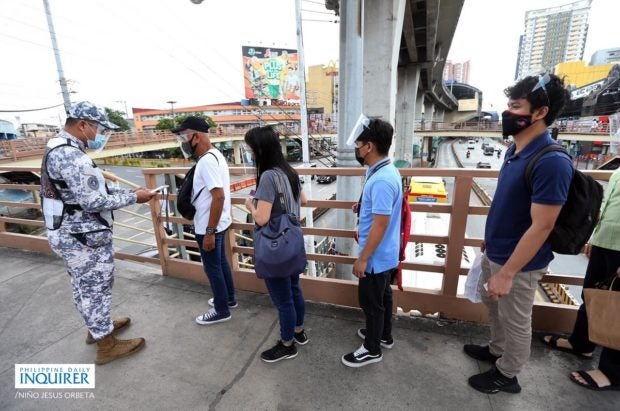 Passengers riding the Edsa Carousel bus form a long line at the Roosevelt Station in Quezon City, as members of the Inter-Agency Council for Traffic asks them for Authorized Person Outside of Residence documents on Day 5 of imposed enhanced community quarantine in the National Capital Region, August 10, 2021. Niño Jesus Orbeta/Philippine Daily Inquirer (file photo)

MANILA, Philippines — The easing of restrictions in Metro Manila would allow some 100,000 workers to return to their jobs, Trade Secretary Ramon Lopez said on Monday.

Lopez, chief of the Department of Trade and Industry (DTI), said the strict lockdowns had affected some 1.8 million workers, but the gradual easing of restrictions had allowed most of them to go back to their jobs.

Prior to the imposition of alert level 2, an estimated 100,000 workers were unable to work, he said.

“So this is what we expect to return now that we are under alert level 2,” he said at a Palace briefing.

Businesses are also expected to be revived, he said, noting earlier figures from the National Economic and Development Authority that P3.6 billion in revenue would be generated for each week on alert level 2.

“The bottom line is this is the return of economic activities that we have been waiting for,” he said.

He said he had been checking up on the various sectors since the weekend and found that many of them are happy and expect a better Christmas compared to last year.

He urged businesses to ensure continued compliance with health protocols.

Under the rules, establishments are required to have health and safety protocol officers who would make sure that the workers and customers are complying with the health measures, he noted.

Presidential spokesperson Harry Roque reminded mall owners that it was their duty to see to the proper implementation of minimum public health standards.

“If you fail to do it, cases will increase, malls will be closed again, and many will lose their jobs once more. So we ask for everybody’s cooperation so that our economy could continue to reopen,” he said.