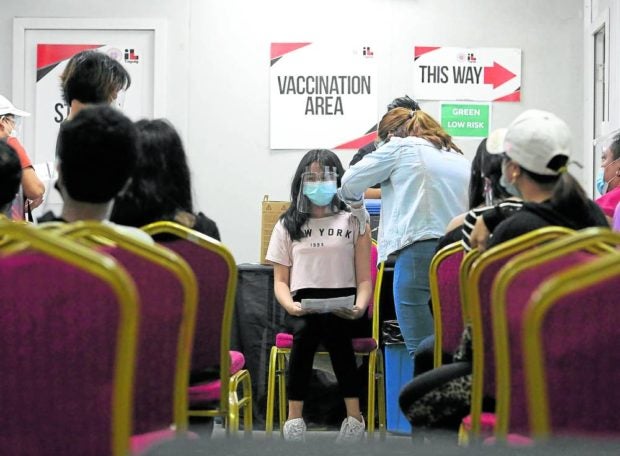 KIDS’ TURN: Teens, accompanied by their parents, get inoculated against COVID-19 in Taguig City as the government ramps up its vaccine rollout, which now covers children 12 to 17 years old. (Photo by MARIANNE BERMUDEZ / Philippine Daily Inquirer)

MANILA, Philippines — The government is considering holding a three-day national vaccination drive from Nov. 29 to Dec. 1 to reach its target of inoculating at least 50 million Filipinos against COVID-19 by the end of the year.

Secretary Carlito Galvez Jr., the country’s vaccine czar who had proposed the mass immunization event, said he wanted one of the days to coincide with Bonifacio Day on Nov. 30.

“Our messaging is everyone who gets vaccinated is a hero,” Galvez told reporters at the Laging Handa briefing on Monday.

For presidential spokesperson Harry Roque, the proposed three-day event would be part of the government’s “aggressive efforts to have population protection.”

“We trust that we will achieve this,” he said in a Palace press briefing.

As of Nov. 7, a total of 29.478 million Filipinos have been fully vaccinated against COVID-19.

Galvez said the event was also aimed at bringing assistance and resources to areas with a low inoculation rate, adding that some had been hampered by issues with accessibility, geographic isolation, the lack of cold-chain facilities and not enough vaccinators.

BARMM, Galvez said, has geographically isolated areas that make it hard for vaccines to reach residents on top of the lack of cold storage facilities and vaccinators. The Bicol region, on the other hand, has been frequently hit by storms that disrupt its vaccination activities.

But he pointed out that the government was addressing these issues, saying that “our deliveries of vaccines to these areas continue and the [Armed Forces of the Philippines] and [Philippine National Police] are helping them.”

While noting that vaccine acceptance has gone up based on the latest survey, he said there remained a need for a massive information drive targeting those who refuse to get jabbed due to false claims about vaccine safety and efficacy.

At the same time, Galvez reported that the country received a lot of vaccine deliveries in October, which helped build up the country’s stockpile.

According to him, this was a good thing because it meant the country now had a steady supply.

The newly delivered vaccines have since been sent to different regions and provinces, Galvez said, adding that these were “sensitive” brands that required ultra-low storage temperatures such as Moderna, Pfizer and Sputnik V.

The national government has also been distributing cold-chain refrigerators donated by the United States to far-flung areas so that local governments with limited storage facilities would be able to store the vaccines.

“Hopefully, by this week and next week, our capacity will increase and at the same time, our administration will also increase this coming two weeks,” Galvez said.

He added that the government was keeping tabs on the expiration dates of the vaccines, and those set to expire this month had already been sent to different regions.

“We’re confident that we could administer these vaccines before they expire. We have more or less 22 days to exhaust all our means to use these on the people who need it,” he said.

The Department of Health (DOH), meanwhile, confirmed that some donated vaccines were set to expire by the end of November although these had been sent to local government units (LGUs) with a track record of doling these out quickly.

“We received donations, including from COVAX. Most of these vaccines are set to expire by the end of November so we deployed them to fast-moving LGUs or those that can vaccinate as many as possible,” Health Undersecretary Maria Rosario Vergeire said in an online briefing.

Vaccines procured by the private sector that were also close to expiring had also been delivered by the DOH to LGUs.

Under an agreement, the DOH will replace the vaccines when the private companies are ready to use them.

In the same briefing, she said the DOH was pushing for mandatory COVID-19 vaccination for health-care workers, saying they were at high risk of infecting patients or getting infected themselves.

“If we are really going to go in that direction of having mandatory vaccination, the DOH will support this if there is a law for us to be able to implement it,” Vergeire said.

“We are not going to pursue or recommend making it mandatory for all but only for some sectors like health-care workers,” she added.

According to her, “all healthcare workers should be vaccinated because it’s important in our work and to protect ourselves because we are exposed every day. The risk is high.”

But she clarified that the DOH would only support mandatory vaccination if a law would be passed.

Vergeire also said the DOH was “open” to the proposal to make COVID-19 vaccination one of the conditions for beneficiaries of the Pantawid Pamilyang Pilipino Program (See related story on Page A3).

Getting jabbed could be considered part of the good health-seeking behavior encouraged by the program, she said.

“We are open to that… However, we need to study this thoroughly because we do not want to violate any rights of a specific individual in terms of receiving benefits from the government,” Vergeire said.