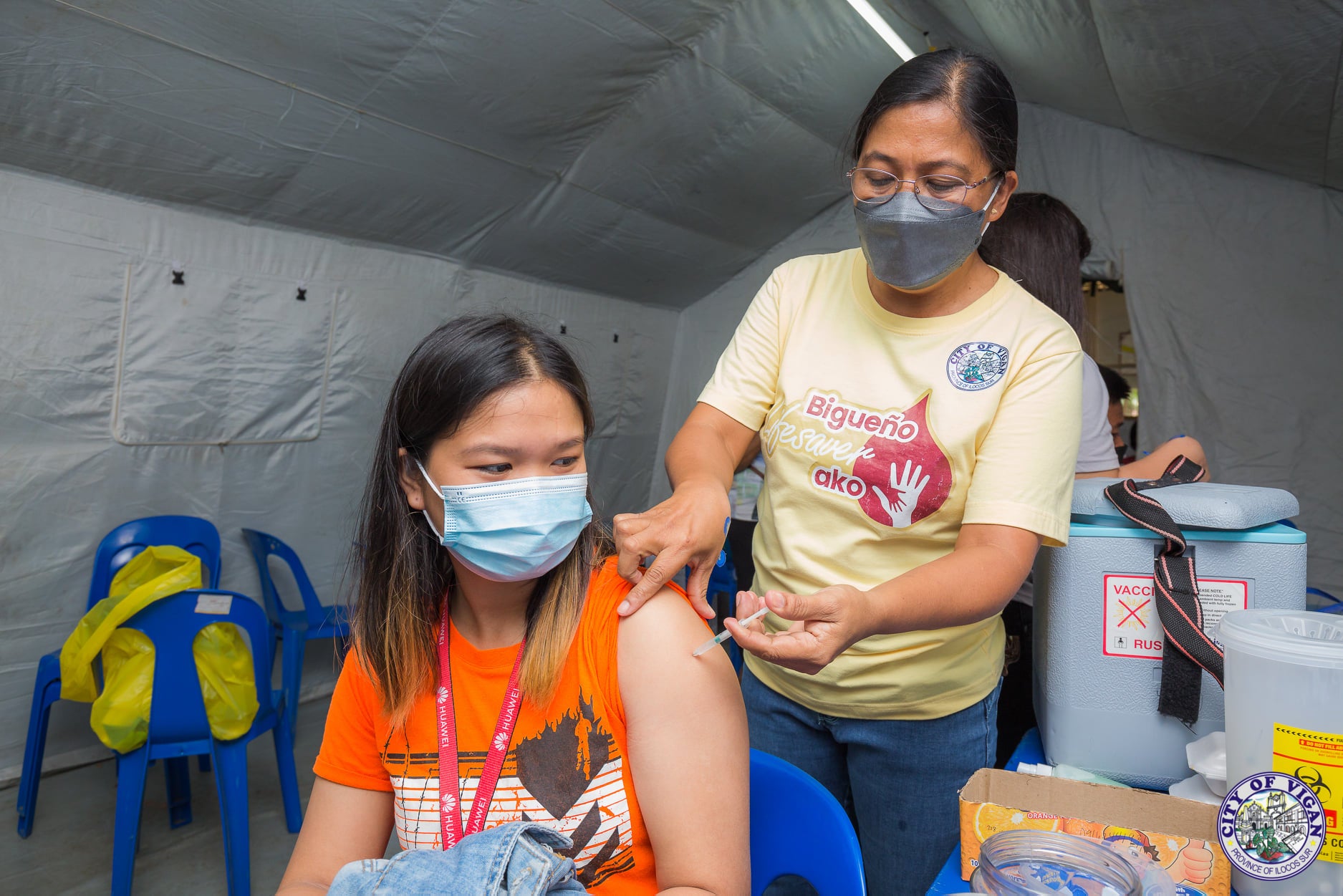 A resident in Vigan City, Ilocos Sur gets a COVID-19 jab in a vaccination facility. | Photo courtesy of Vigan city government

The vaccine czar cited the policies of other countries that turned to vaccination mandates as Delta and other emerging variants continue to wreak havoc globally, and vaccine uptake in areas outside of Metro Manila began slowing down.

“We need to inoculate or maybe mandate vaccination because we are at risk if we will not vaccinate everybody. If we will have a sizable amount of 20 million unvaccinated people roaming around, it will threaten the safety of the families of those vaccinated,” Galvez said in an interview with ANC’s “Headstart” on Thursday.

He said an executive order (EO) issued by President Duterte might be sufficient to make COVID-19 vaccination mandatory.

According to Galvez, among those he was looking into for the inoculation mandate would be recipients of the government’s dole out Pantawid Pantawid Pamilyang Pilipino (4Ps) program, who belong to the A5 priority group composed of 12,911,193 target individuals. More than 4 million families are beneficiaries of the 4Ps program.

According to data from the National Vaccination Operations Center (NVOC) as of Nov. 2, more than 3 million or only 23.88 percent of those under the target population of A5 category have been vaccinated.

Back in August, the Palace said it did not see the need to make COVID-19 vaccination mandatory to all Filipinos, citing the limited global vaccine supply.

The Department of Health, meanwhile, stood on the recommendation of the World Health Organization (WHO) to give the people the right to choose whether or not they would get vaccinated.

Several countries, however, did away with the advice of WHO and proceeded with their vaccine mandates.

For example, New Zealand ditched its “COVID zero” of imposing stringent border lockdowns amid persistent infections and implemented a “no jab, no job policy” on health workers and teachers.

In the United States, President Joe Biden ordered federal government employees to get vaccinated, and large companies should require their workers to get fully inoculated or submit themselves to weekly testing.

As of Wednesday, more than 28 million Filipinos or 25.6 percent of the 110 million population have been fully vaccinated since March. Total vaccine doses administered was at 61,354,945.

Based on NVOC data as of Nov. 2, 8.6 million or 61.7 percent of the population in the National Capital Region have been fully vaccinated. However, other regions were slower in their vaccine rollout.

In the Bangsamoro Autonomous Region in Muslim Mindanao (BARMM), only 293,050 have been fully vaccinated or less than 7 percent of its total population of 4.2 million—the lowest in all 17 regions in the country.

Galvez attributed the low inoculation rate to vaccine hesitancy. This was despite the Darul Ifta of BARMM declaring COVID-19 vaccines halal, or permissible in Quran, Islam’s central religious scripture.

To address this, Galvez said the government would deploy the upcoming 6 million doses of single-dose Janssen vaccine, developed by Johnson & Johnson, to BARMM.

He noted that BARMM residents had a high acceptance of Janssen after initially sending 3 million doses.