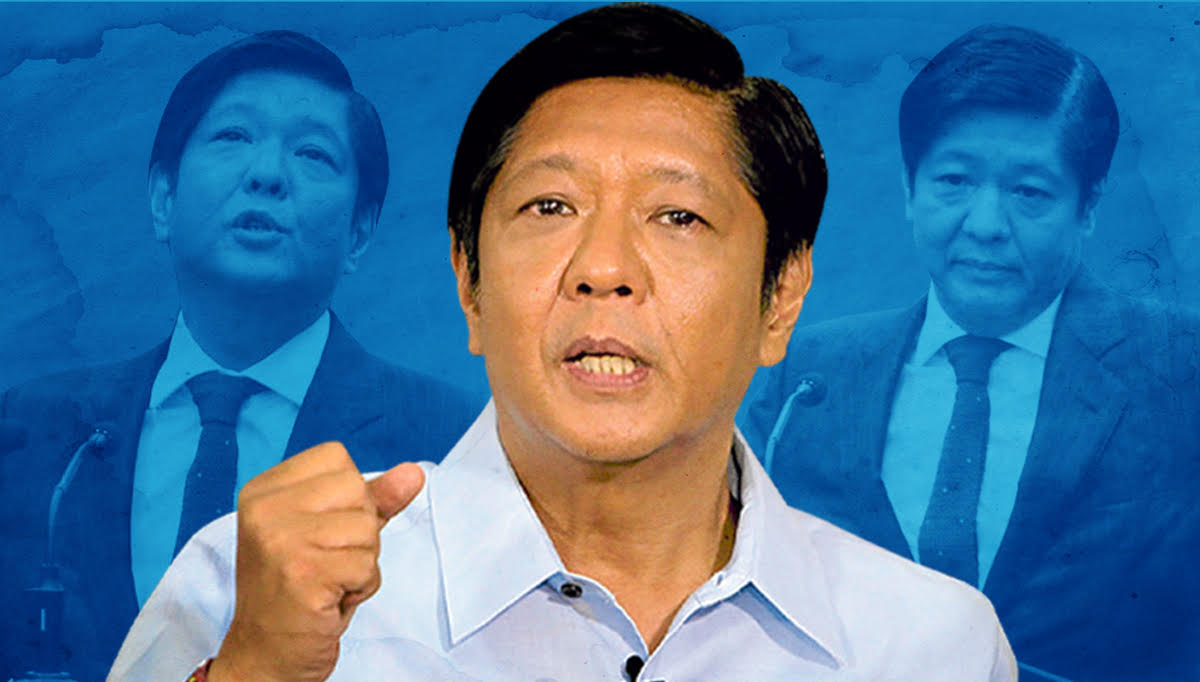 The spark came from a case filed at the Commission on Elections (Comelec) seeking to junk Marcos Jr.’s certificate of candidacy (COC) for president in next year’s elections on the ground of alleged misrepresentation and disqualification as a convicted tax law violator.

Marcos Jr’s camp called the case “propaganda.” The 57-page petition, however, listed several legal bases to seek the disqualification of the late dictator’s namesake from running for president.

Marcos Jr., the petition argued, should not be allowed to seek the highest public office of the land because “he is, plainly, a convicted” person.

The petition, filed by six individuals representing groups advocating for those who suffered abuses during the late dictator’s more than 20-year reign, told the Comelec that Marcos Jr. “misrepresented” himself.

It said Marcos Jr.’s COC should be cancelled because it contained “false material representation,” one of the grounds for disqualification listed by the Omnibus Election Code, the law that governs Philippine elections.

Section 74 of the law said that the COC “shall state that the person filing it is announcing his candidacy for the office stated therein and that he is eligible for said office.”

But Marcos Jr., who has an active electoral protest case against Vice President Leni Robredo, was accused of falsifying his COC when he stated there that he was eligible to run for president in 2022.

Marcos Jr. lost the vice presidential race to Robredo in 2016 and claimed he was cheated. The case he filed to overturn the results of the elections in his favor has been dismissed but remained active on appeal. His presidential run would technically mean he was dropping the case against Robredo.

The petitioners against Marcos Jr.’s COC for president said the late dictator’s son had a “deliberate attempt to mislead, misinform and deceive the electorate” by declaring in his COC application that he was qualified to run.

In the COC application, a question appears asking the aspirant to declare if he had been found liable or convicted of any offense that carried the penalty of perpetual disqualification from holding public office. Marcos answered “no.”

“No” was untruthful, the petitioners argued, because Marcos Jr. has a conviction for violating the country’s tax laws.

The conviction, according to the petition, became final in 2001, which is among the grounds for disqualification of a candidate—whether for president or a lower position—in the Omnibus Election Code. 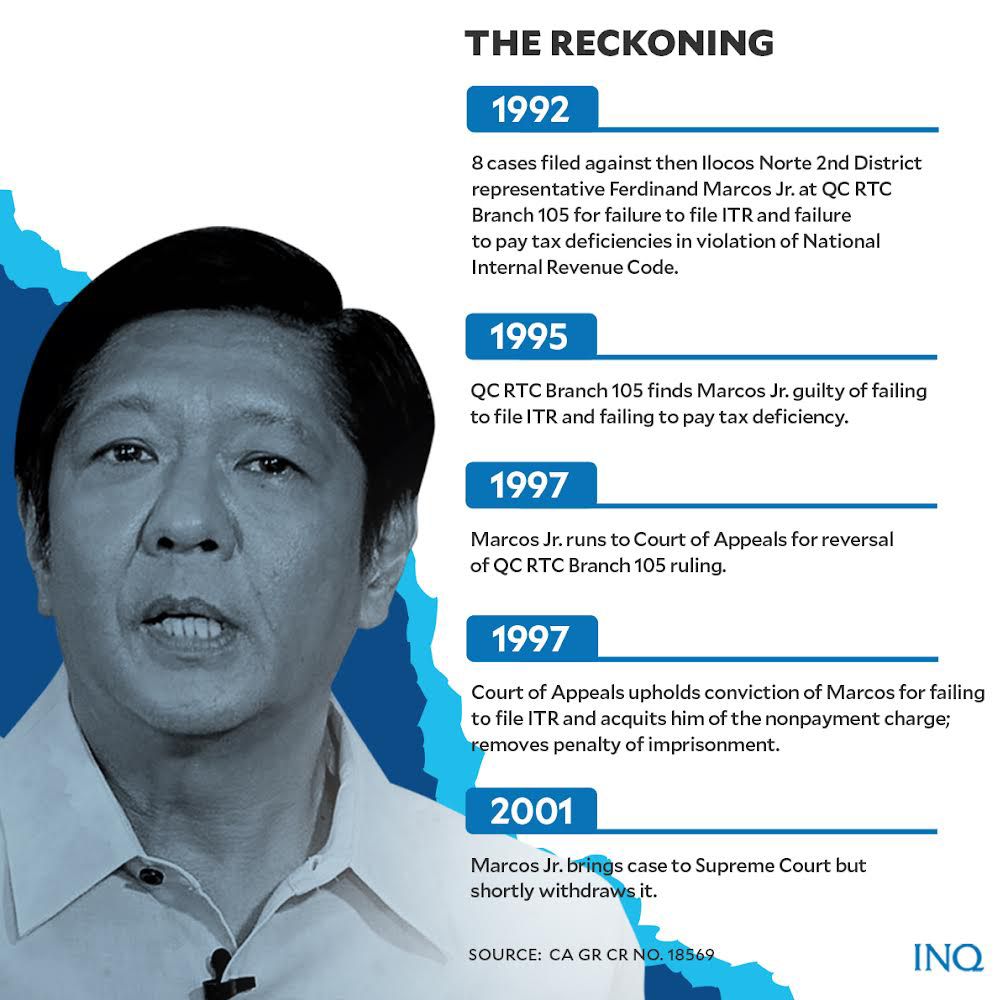 Marcos Jr.’s brush with Philippine tax laws started in 1992 when eight criminal cases had been filed against him at the Quezon City Regional Trial Court (QC RTC) Branch 105 for violation of the 1977 National Internal Revenue Code (NIRC), a law which took effect at the height of the power of the late dictator Marcos.

In 1995, Marcos Jr. was convicted and found “guilty beyond reasonable doubt” by the QC RTC Branch 105 and sentenced to these: 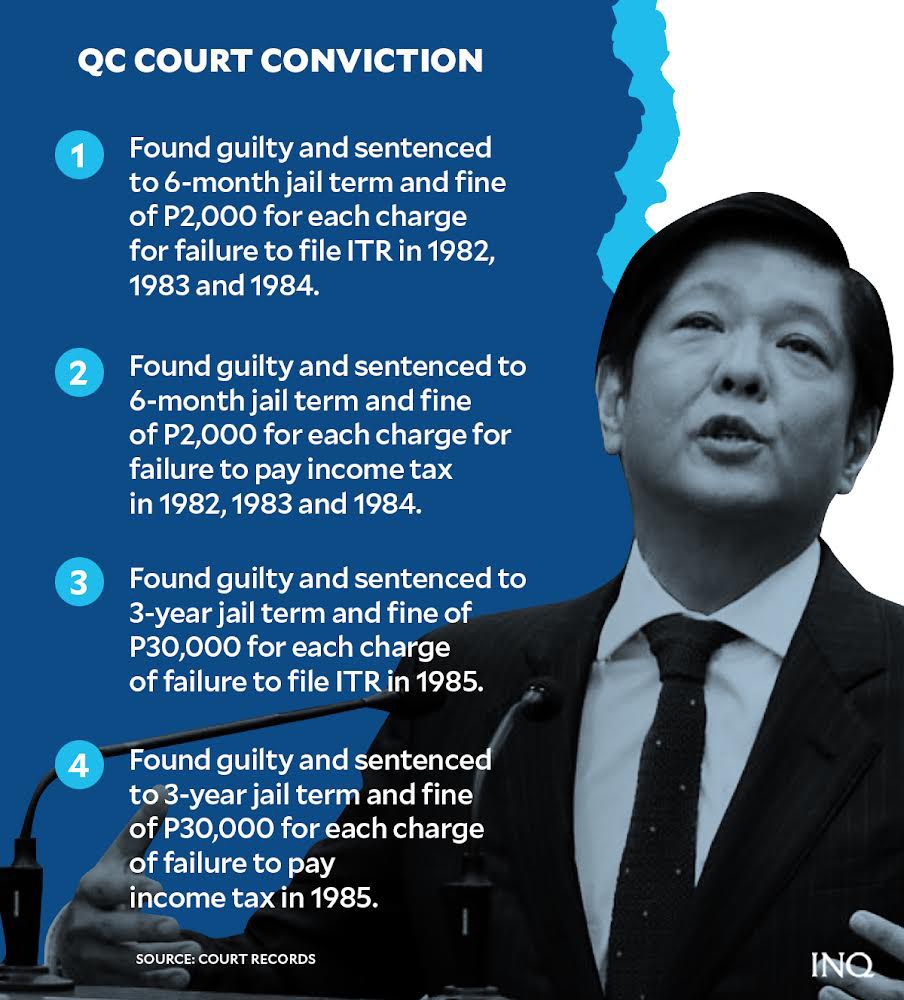 In 1995, Marcos Jr. brought the case to the Court of Appeals (CA) to reverse the RTC’s decision. In 1997, the CA upheld his conviction for failing to file ITR but dismissed the conviction for non-payment of tax deficiencies.

The CA decision, while retaining the monetary penalties of the QC RTC Branch 105 ruling, removed the penalty of imprisonment. The CA imposed these: 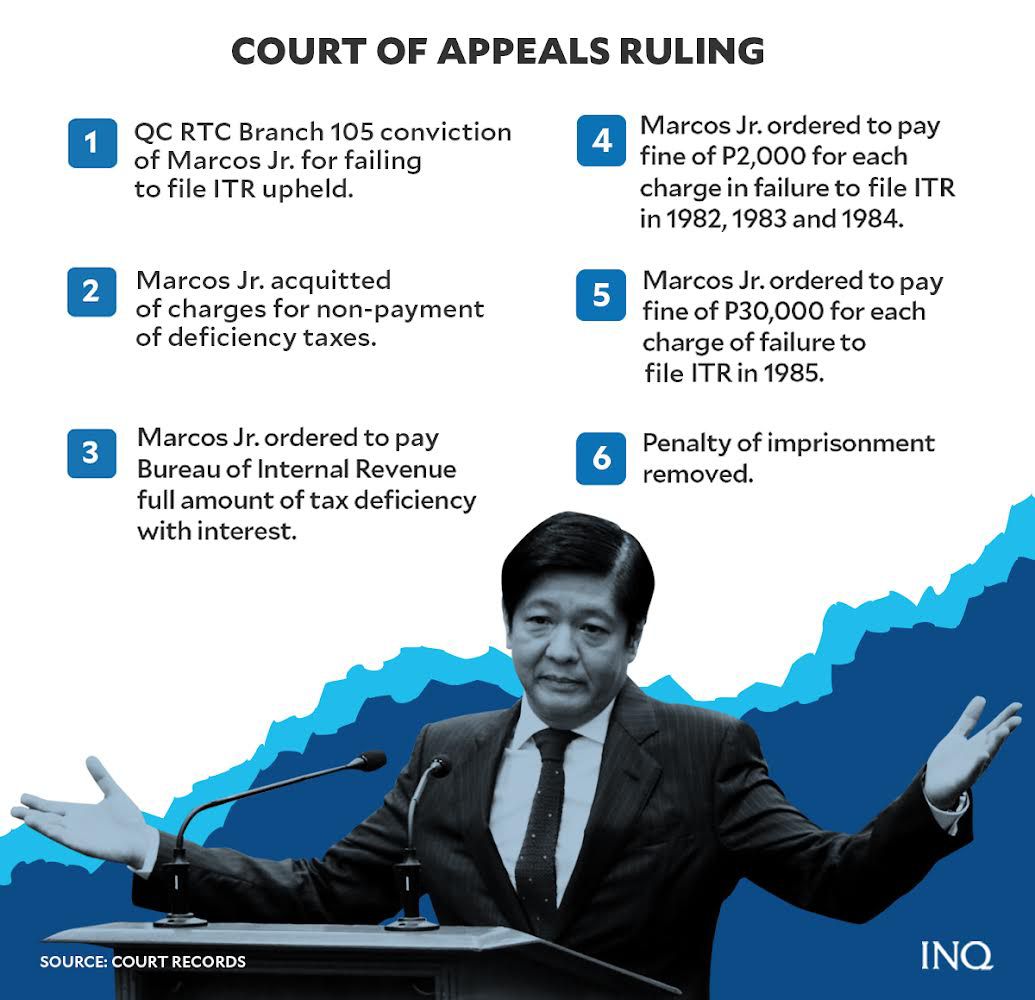 Marcos Jr.’s conviction was appealed to the Supreme Court (SC) but withdrawn by him. The withdrawal of the case was recognized by the high court in 2001.

Section 78 of the Omnibus Election Code said that the “exclusive ground” to seek the denial of a COC is “any material representation contained therein as required by law is false.”

The amended Internal Revenue Code listed perpetual disqualification from holding public office as among the penalties for violators. This was among the points being raised in the petition against Marcos Jr.’s COC.

Fides Lim, a member of the political detainees’ group Kapatid and among the petitioners against Marcos Jr.’s COC, said the late dictator’s son should automatically be disqualified by the Comelec on those grounds. “In fact, the filing of a petition like ours is not even necessary,” Lim said.

In 2013, the SC, in Jalosjos vs. Comelec, said that the Comelec should enforce and administer all laws relating to the conduct of elections in the Philippines.

Lim said that the Comelec has the responsibility “to cancel the COC of a disqualified individual running for office based on a final conviction.”

They said that the family, through Marcos Jr., deprived the government of at least P203.8 billion—including interest, surcharge and penalties—in revenue.

The petition stated that Marcos Jr. was convicted of a crime “involving moral turpitude,” but election law professor Alberto Agra explained that moral turpitude involved not only failure to file ITR or pay income taxes.

Section 12 of the Omnibus Election Code also stated that anyone who “has been sentenced by final judgment” for any offense with a penalty of more than 18 months imprisonment “or for a crime involving moral turpitude, shall be disqualified to be a candidate and to hold any office.”

Agra said that to classify Marcos Jr.’s case as one that involved moral turpitude, “fraud” should be established. “His conviction did not establish this,” Agra said.

Former Senior Associate Justice Antonio Carpio explained that while disqualification on the basis of conviction for failure to file ITR would be left to the Comelec and Supreme Court to decide, “if you repeatedly failed to file it consecutively for several years, it would look like the reasoning tends to evade the payment of the tax”.

Lawyer Vic Roriguez, spokesperson of Marcos Jr., dismissed the bid to block the run for president of the late dictator’s son as a “predictable nuisance.”

It was mere “propaganda,” he said, explaining that the Marcos camp will address this “at the proper time and forum – after we receive the official copy of the same.”

However, Lim, whose husband, Vicente Ladlad, was also a victim of the Marcos dictatorship, asked:  “Who is making propaganda when our petition simply reminded the Comelec about those decisions?”

“When did facts emanating from court decisions constitute propaganda?” she said.

“But that’s the problem when Marcos apologists and their enablers cannot distinguish truth from lies nor identify the real nuisance candidacy that the Comelec should have barred ages ago to save the country from their ecosystem of gutter politics,” she said.

“This election is indeed about the future of the Filipino people—that does not include Bongbong Marcos and the Marcos family and their enablers who stole our future during martial law and are back at it again,” she said.

Marcos finds ally in Dela Rosa in disqualification case: Just show your ‘dislike’ of him in ballot