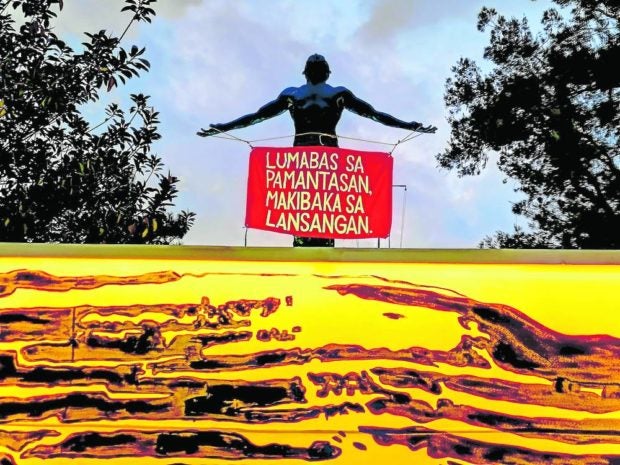 HEEDING CALL A protest message is displayed at the University of the Philippines (UP) Baguio’s Oblation in this photo taken in 2019. UP Baguio is the first higher education institution in the city to heed a clamor from students for an academic break due to pressure from distance learning. —EV ESPIRITU

BAGUIO CITY, Benguet, Philippines — Acknowledging that many students have suffered from “burnout” in the second year of the COVID-19 pandemic, colleges and universities in this city agreed to schedule short breaks in between examinations and ease their workload following a dialogue led by Mayor Benjamin Magalong on Tuesday.

Student councils in the city have clamored online for a five-day academic break beginning Nov. 12 after complaining about stress and overwork due to a semester’s worth of assignments from their teachers.

The students brought to the spotlight a mental health crisis plaguing local colleges during the pandemic by launching a social media campaign, highlighted by an Oct. 30 rally at the main gate of Saint Louis University (SLU).

Except for medical courses which allow limited physical interaction during laboratory subjects, all colleges and universities have been giving digital lectures or homework to most of their students, according to officials of local universities.

Student leaders and university officials attended the meeting, which was also joined by Baguio Rep. Marquez Go, chair of the House committee on higher and technical education.

“Teachers tend to assign a lot of homework and students are disadvantaged when they have no gadgets or reliable internet [connection],” a college professor told the Inquirer in a separate interview, adding that this may be due to the teachers’ inability to assess if students actually listen and absorb online lectures. 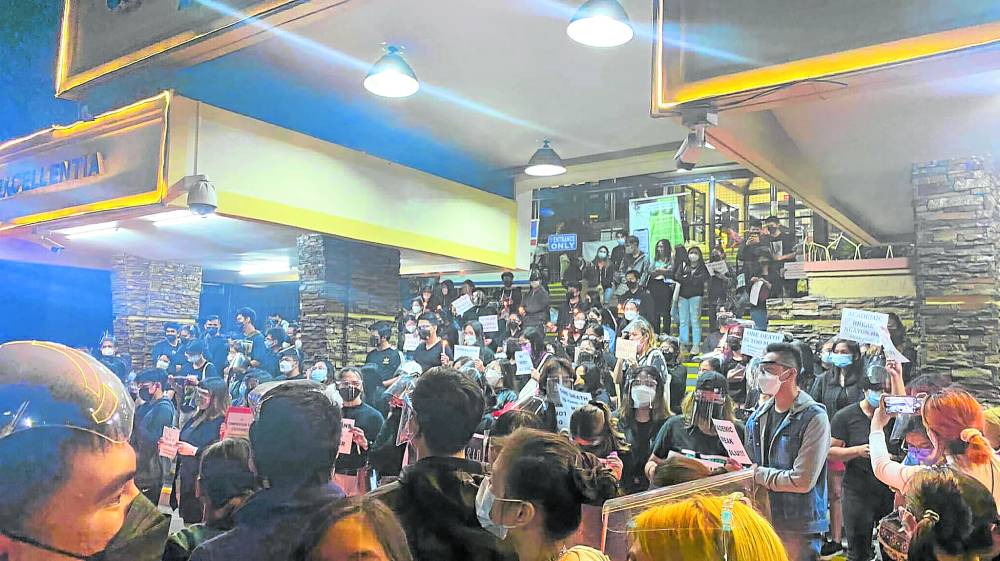 SPARK A rally staged by about 400 students of Saint Louis University and members of youth groups in Baguio City has led to a dialogue with local government and university officials to address their concerns about heavy academic workload and mental health. —PHOTO COURTESY OF NATIONAL UNION OF STUDENTS OF THE PHILIPPINES CORDILLERA

Overworked teachers and school staff said they might also need their own academic breaks.

The Inquirer source, who asked not to be named due to the sensitivity of the issue, said many lecturers, instructors and professors were still required to attend meetings and produce reports to show that school operations had normalized. “We need to slow down,” he said.

UP Baguio had earlier instituted an academic break on Nov. 2, while SLU president, Fr. Gilbert Sales, through his representative Roberto Arguelles, relayed his willingness to impose a break as early as Wednesday.

Representatives from other colleges like Pines City Colleges of Pines City Doctors Hospital and smaller institutions like Data Center Philippines and STI College also indicated they would address breaks in their school calendars for this year as well as succeeding semesters.

While their campaign was successful, the student leaders earned a gentle rebuke from Magalong, school administrators and a group of mental health specialists for misusing suicide data in their campaign.

Posts concerning incidents of suicide allegedly due to school pressure have circulated online, some of which may have identified victims.

“I know you played up suicide to make a point but it caused panic,” Magalong said. The mayor said the local government and schools were inundated with telephone calls from parents who were alarmed by a supposed high suicide rate attributed to college work pressure.

The city’s students earlier campaigned for the resumption of in-person classes by speeding up vaccination and outfitting classrooms with anti-COVID features.

“Distance learning does not benefit every student because of poor digital interconnectivity and the absence of appropriate devices,” said UP Baguio student council member Franz Calanio at the dialogue.

During an Oct. 20 online meeting, CHEd officials said 23,286 of 109,621 Cordillera students had received their shots, while 6,602 of the region’s 8,025 college faculty members and employees have been vaccinated.

Read Next
No more autopsy as body of NPA leader cremated
EDITORS' PICK
Shop smarter with vivo’s big 12.12 holiday deals
The vivo Y02 is now available in the Philippines for only PHP 5,299
How not to retire as an ex-president
Hidilyn Diaz wins only gold missing from her collection
House energy committee chair Arroyo bats for cheap electricity
Lawmakers eyeing more changes in Maharlika plan
MOST READ
Jovit Baldivino, ‘Pilipinas Got Talent’ winner, dies at 29
LPA enters PAR, to likely strengthen into tropical depression in coming days – Pagasa
Andi Eigenmann, family in Manila for a quick visit; Ellie dines with grandma Jaclyn Jose
Lawmakers eyeing more changes in Maharlika plan
Don't miss out on the latest news and information.