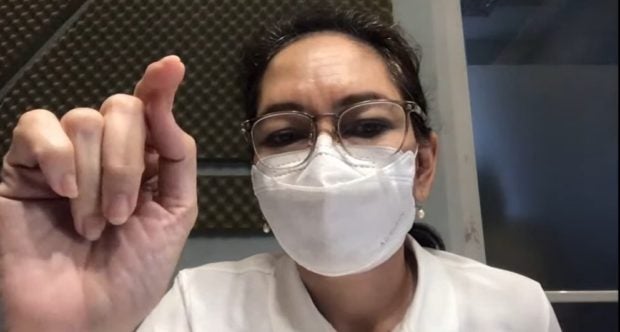 MANILA, Philippines — Senator Risa Hontiveros on Wednesday slammed as “laughable” and a “futile” diversionary attempt the sedition and perjury cases filed against her and her staff members by an employee of Pharmally Pharmaceutical Corp., saying she is ready to face the complaint lodged before the Office of the Ombudsman.

In an online press conference, Hontiveros said the cases were “clearly a last-ditch effort by Pharmally and its backers.”

“The charge to commit sedition is laughable. Holding public officials accountable is not rising publicly and tumultuously against the government,” she said.

(Accepting information from citizens to exact accountability of public officials on graft and corruption of limited pandemic funds, that is hardly, that is not at all inciting to sedition.)

“Hindi ‘yan calling on the public to rise publicly and tumultuously against the government. At klaro sa aming mga resibo, walang bribery on the part of anyone in my office,” Hontiveros stressed.

(That is not calling on the public to rise publicly and tumultuously against the government. And it is clear from our receipts that there is no bribery on the part of anyone in my office.)

The 15-page complaint filed by a certain Jaime Vegas, assisted by lawyer Ferdinand Topacio, claimed that Hontiveros and some members of her staff bribed witness Veejay Almira to testify against Pharmally, which is at the center of a Senate investigation over its multi-billion supply deals with the government.

(We are ready to face this nonsense accusation and we will answer it…We will respond to that case in the Office of the Ombudsman and we will study what other steps we can take to reply to this.)

(This latest attack from the camp of Pharmally and their backers is proof that they feel the need to try and divert the attention, not only of the committee, not only of the Senate but also the public.)

Almira also executed an affidavit attached to Vega’s complaint, now admitting that he was allegedly bribed.

But Hontiveros said Almira first reached out to her office through her official Facebook page on Sept. 3. Almira, according to Hontiveros, then sent an email to her office on Sept. 9, saying he had information about Pharmally.

Hontiveros presented him as a witness during the Sept. 24 hearing, where Almira told senators warehouse staff were instructed to change the production certificates of the face shields to be delivered.

This claim was eventually confirmed by Pharmally official Krizle Mago, who then backtracked on her damning admission and said it was a “pressured response.”

Hontiveros said her office extended assistance to Almira, but this was to help him relocate as he feared for his life after being informed that two motorcycle-riding men offered to pay his friend P2,000 to disclose his residence.

The assistance was given to Almira after he had already testified before the Senate inquiry, Hontiveros further pointed out.

The complaint likewise claimed that Almira was “tempted to falsely, unlawfully and wrongfully implicate” Pharmally because he needed money to buy medicine for his sick child.

But Hontiveros’ chief legislative officer, lawyer Jaye Bekema, said Almira made no mention of any medical need when he first contacted the senator’s office through Facebook in September.

(His first entry points to our office, there was no mention of any medical needs.)

Bekema, who said she was still communicating with Almira in October, admitted extending financial help to him in her personal capacity.

She said she sent Almira only a total of P3,500 through GCash, as well as toys for his three-month-old baby.

(But it was always like humanitarian assistance. It no longer involved our office. Everything is documented, I have screenshots that he was the one who requested the assistance, and very clearly, this was after he disclosed information about Pharmally.)

When asked regarding the possibility of Almira being threatened or pressured to claim he was bribed, Bekema said she has no evidence of this but added that Almira is in a “position of vulnerability.”

(He is a blue-collar worker at Pharmally’s warehouse. He has a three-month-old baby with a condition, and I know that he fears for his life. In this one, we have evidence that he is terrified because motorcycle-riding men are looking for him.)