UK defends PM’s plan to jet out of COP26 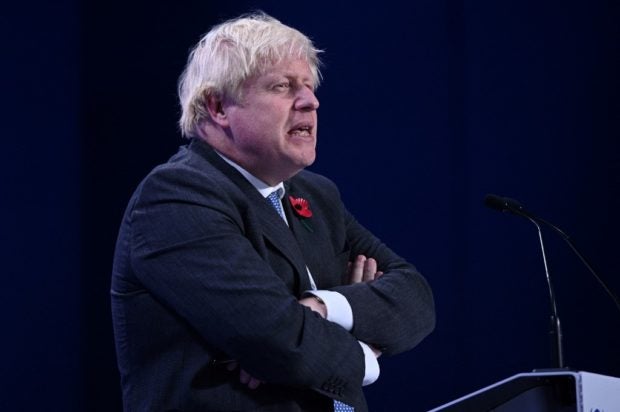 GLASGOW — Prime Minister Boris Johnson will fly back to London from Glasgow rather than taking the train, Downing Street said Monday hours after he chided world leaders for not doing more on climate change.

Aviation — especially the private kind — is a bete noire of the environmental lobby as it emits vastly more carbon per passenger than other forms of transport.

Hundreds of campaigners attending the COP26 conference in Scotland’s biggest city have come up from London by train, although the main line to Glasgow was hit by lengthy storm-related delays Sunday.

Johnson flew in to COP26 late Sunday from Rome, where he was attending a weekend G20 summit, aboard a chartered Airbus plane painted in a patriotic UK livery.

He will use the same jet to return to London on Tuesday, his office said, after opening a two-day COP26 summit by warning that future generations “will not forgive us” if leaders fail to act.

“It’s important that the prime minister is able to move around the country and we face significant time constraints,” Johnson’s spokesman told reporters in Glasgow.

London is 60-90 minutes from Glasgow by plane on average, while the train journey can take more than five hours.

“The fuel we are using is sustainable and the emissions are offset as well,” the spokesman stressed.

He added that under Johnson’s leadership, Britain was “leading the way on efforts to get to net zero”.

Other leaders have echoed Johnson’s demands for climate change action but also face criticism for their own transportation choices.

US President Joe Biden’s convoy in Rome numbered more than 80 vehicles, led by his bomb-proof car “The Beast”, which is not known for its fuel efficiency.

Many of those cars as well as those of other delegations sat idling their engines outside the G20 summit venue as the leaders deliberated inside.

“Boris Johnson is right to warn that the world is ‘one minute to midnight’ when it comes to climate change,” he told AFP.

“Which is why it would have been nice to see him model some low-carbon behavior by getting the train to Glasgow rather than flying by jet to and from London.

“Maybe if the UK government used taxes on domestic flights to improve its rail infrastructure, low-carbon forms of transportation would be easier, cheaper and more widely used.”