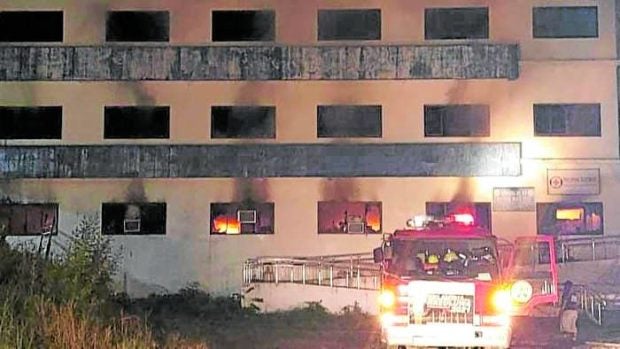 MANILA, Philippines — Close to 150,000 doses of COVID-19 vaccines were lost to a recent fire that broke out at the provincial health office of Zamboanga del Sur, delaying vaccinations in the Zamboanga Peninsula region, the government said on Tuesday.

The nearly five-hour blaze last Sunday swept through the provincial cold storage facility located at the Integrated Provincial Health Office (IPHO) in Pagadian City, the capital of Zamboanga del Sur, where these various brands of vaccines were kept.

According to a joint statement by the National Task Force Against COVID-19, the Department of Health (DOH) and the Department of the Interior and Local Government (DILG), the fire destroyed 148,678 doses—88,938 of Pfizer-BioNTech, 36,164 of Sinovac, 14,400 of Moderna and 9,176 of AstraZeneca vaccines.

The statement said the fire also destroyed an unspecified number of vaccines against hepatitis, measles and polio.

The cause of the blaze is still unknown and an investigation is underway.

“All agencies are on standby to provide immediate support to the Regional and Local Vaccination Operations Centers (VOC) in the Zamboanga Peninsula,” the statement said.

The three agencies assured residents of the province, especially those who were scheduled to receive their second dose, that the vaccines would be replenished.

“The vaccine doses will be shipped immediately as soon as the new cold storage is ready for use,” the statement said.

Because of the number of doses destroyed and the damage to the storage facility, vaccine administration at the provincial and municipal levels would be rescheduled, but new dates were announced.

The AstraZeneca doses were supposed to be deployed on Nov. 3 as a second dose. The Moderna jabs were for 12- to 17-year-olds, also on Nov. 3.

A quarter of the Pfizer vaccines were allocated for Pagadian City and the rest were intended for other parts of the province.

The Sinovac jabs were not delivered immediately because some local governments refused to accept them due to vaccine brand preference.

The statement did not say how many, if any, doses were saved from the fire.

The DILG issued a show-cause order to the provincial government for its failure to deliver the vaccines within three days after receiving them, in accordance with a department directive.

Provincial governments were directed to distribute vaccines to their component cities and municipalities within that period to avoid wastage and to ramp up local vaccinations.

The recipients, in turn, should administer the vaccines immediately and not keep them for more than 15 days from the day the shots were delivered to them.

To avoid a similar incident in the future, the DILG and DOH ordered all municipal, city and provincial governments to ensure there would be safety officers 24/7 at all vaccine cold chain facilities and warehouses.

Only 15.14 percent of the population of the Zamboanga Peninsula region have been fully vaccinated as of Oct. 18, according data from the National VOC.

It is one of the six regions with the lowest number of vaccinations in the country.