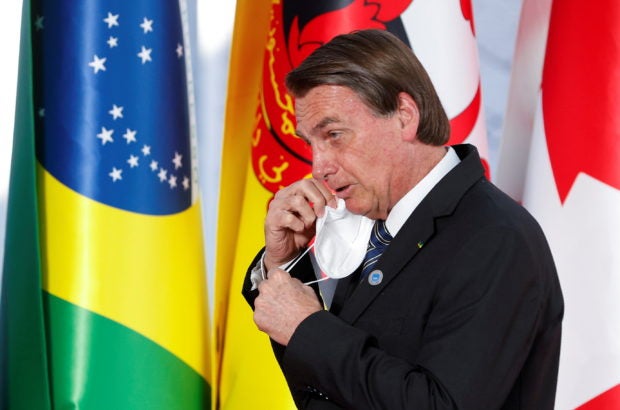 PISTOIA, Italy — Brazilian President Jair Bolsonaro was met by jeering protesters when he visited the Italian town of Pistoia on Tuesday to pay homage to a war memorial dedicated to Brazilian soldiers killed in World War II.

The right-wing leader, who attended the Group of 20 summit in Rome last weekend, has been criticized for increased deforestation in the Amazon under his government and for his management of the COVID-19 pandemic. His opponents also accuse him of dictatorial behavior.

A small group of supporters welcomed Bolsonaro at the monument while about 300 people gathered in the center of Pistoia to rally against him.

Italian rightist leader Matteo Salvini said he was sorry for the actions of the demonstrators.

“Honoring those who died should fall outside of the political debate,” Salvini said.

Groups linked to leftist parties plan to hold a separate commemoration ceremony to avoid having to share the moment with Salvini and Bolsonaro.

The Brazilian Expeditionary Force fought with Allied forces from 1944 to 1945, mostly in Italy, the only South American country to take part in World War II. About 950 Brazilian servicemen were killed.

Clashes between police and protesters also took place on Monday in the northern city of Padua just before Bolsonaro visited the city’s Basilica, with water cannon used to break up the demonstration.

Earlier, Bolsonaro had been awarded honorary citizenship in nearby Anguillara Veneta, the birth town of some of his ancestors.